Gaza’s women use the internet to sell homemade meals

In light of the harsh economic conditions in the Gaza Strip, some housewives have decided to sell their homemade dishes online, which has turned out to be popular, especially during the month of Ramadan. 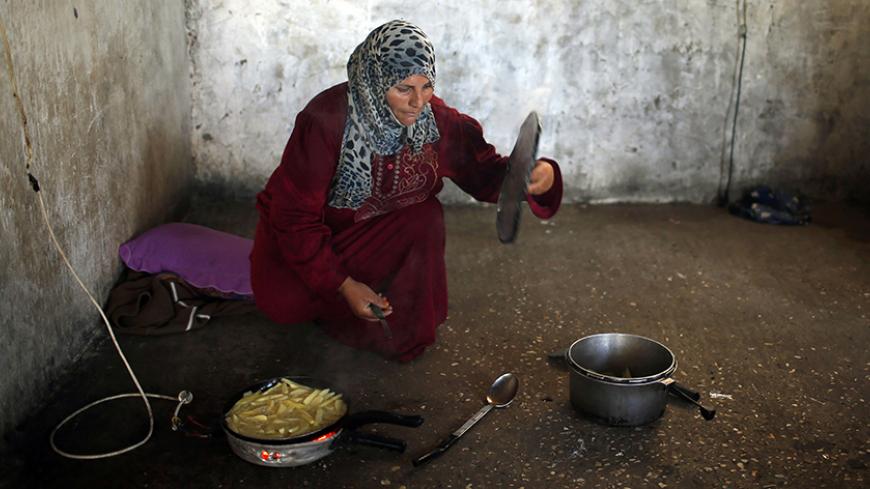 A Palestinian woman cooks at her house in the northern Gaza Strip, May 26, 2014. - REUTERS/Mohammed Salem

GAZA CITY, Gaza Strip — Palestinian women in the Gaza Strip who master the art of cooking prepare in their own small kitchens large quantities of food and meet customers’ requests as efficiently as restaurants. The women are creating online profiles offering to cook and deliver meals to customers in exchange for a price based on the cost of each meal and the effort it takes to prepare it. The orders are placed one or two days ahead so the women can get the ingredients and prepare the meal for the agreed delivery time.

The women show off their skills and compete for customers by posting photos online of the meals they cook, such as Umm Said who created the Facebook page “Original Mandi Kitchen.”

Sabreen Sununu runs a home-based food business called “Our Kitchen Is Different.” Sununu, 38, told Al-Monitor that she learned the art of cooking from her husband, who is a government employee and a great cook. She taught herself how to prepare tasty dishes by watching cooking programs on TV and online; she has now mastered most of the Middle Eastern cuisine and a large part of the Western cuisine.

“After my home was indirectly targeted and destroyed by the shelling during the recent war on the Gaza Strip [summer 2014], I began looking for a small project to contribute to my family’s income and help with expenses. Since I only excel in cooking, I resorted to the online kitchen project,” she said.

While there is no shortage of restaurants in the Gaza Strip — as documented by the Palestinian Committee for Restaurants, Hotels and Touristic Services that noted there are about 220 restaurants in Gaza — Sununu tapped into a niche market: tasty homemade meals. She launched her business in January 2016.

At first, Sununu was worried about the competition, as many women had already started their own online food delivery service. But encouraged by her skills and enthusiasm, Sununu started her business knowing that initially the revenue would be modest.

“Most of Gaza's residents quickly learned about my business venture, and it has become famous for its cleanliness and tasty dishes,” she said.

She added that customers mostly order grape leaves, kibbeh (meatball), maftoul (Palestinian couscous with chickpeas), kabsa (rice dish), musakhan (chicken and onions) and the Palestinian al-Qadra (chicken and rice), most of which are dishes that require time and effort to prepare that working women may not have.

“Orders have significantly increased during the month of Ramadan. I now prepare several dishes every day with the help of my husband and our children,” she said, adding that when she has several large orders, she asks her neighbors and friends to assist her.

She said that orders must be placed one or two days ahead, online or by phone. She claimed that the prices she charges are affordable for everyone, as she takes into account Gazans' financial situation. Few customers have told her that the price of a meal is too high; she charges a reasonable price of $12 for a meal for five people.

However, the women face many obstacles in preparing the meals, such as frequent power cuts and having to prepare several orders at the same time in a small kitchen.

Sununu hopes one day to open a takeout kitchen outside her home, where she can easily prepare several meals at the same time.

Islam Mohammad is a working woman who regularly orders homemade dishes online. She told Al-Monitor that many working women do not have time to prepare food or do not know how to cook and thus rely on online meal services; in addition, most restaurants do not offer dishes such as maftoul.

Mohammad, 28, who works at the Ministry of Women's Affairs, said that during the month of Ramadan, when many people come over for iftar (breaking of the fast), she orders dishes online. These services have also allowed her to offer her family meals they had not eaten in some time.

According to the 2015 statistics of the Euro-Mediterranean Human Rights Monitor, the Gaza Strip is home to 1.95 million people, 40% of whom live below the poverty line and 43% of whom are unemployed. In this regard, economic analyst Ibrahim Abu Aisha told Al-Monitor that these small businesses could help improve Gaza’s harsh economic conditions. He said, “These small businesses play an important role in the development of the Palestinian economy, especially in light of the increasing rates of poverty and unemployment.”

He pointed out that home-based food businesses, which are easy to set up and do not require a large starting capital, encourage women to become part of the workforce and support their families, create job opportunities, reduce the poverty rate and stimulate the local economy.

Speaking about the major challenges facing these businesses, Abu Aisha said they include power outages and the lack of certain kitchen equipment and appliances, which, if available, are often expensive because of the Israeli blockade imposed on Gaza. Also, there are no lending, tax and incentive policies for small businesses in the Gaza Strip.

For his part, the deputy director of the Ministry of Economy, Emad al-Baz, told Al-Monitor that the ministry cannot currently monitor and follow up on the activities of home-based food businesses in the absence of a law, but that it is in the process of setting up a system to ensure that homemade meals are prepared in a clean environment and are safe to be offered to consumers.

In light of the circumstances Gazans face, customers will continue to order meals from online food businesses and support the women who have come to rely on their small businesses as an important source of income.