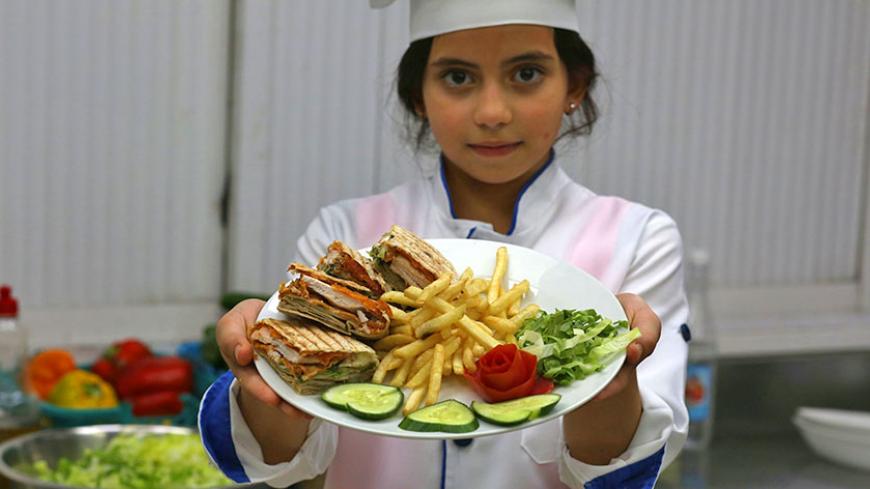 GAZA CITY, Gaza Strip — Ten-year-old Sana Abu Hasira can hardly believe that she was able to make it. She managed to cook a musakhan for the first time in her life. The musakhan is a traditional Palestinian dish of grilled chicken and onion, with a touch of olive oil, pepper and sumac. Hasira insisted that this Al-Monitor correspondent taste her food; it was absolutely delicious.

Sana told Al-Monitor, “I have always loved to cook. All of the toys I have are either kitchen utensils or cooking kits. When I learned about the program on Facebook, I rushed to join it.”

She said she usually watches cooking videos on YouTube and is amazed by the beautiful sandwiches the cooks make. “My mom yells at me when I come into the kitchen, hold a knife and try to cook. But once I obtain my certificate from the program, I will be able to help her prepare meals,” she added. 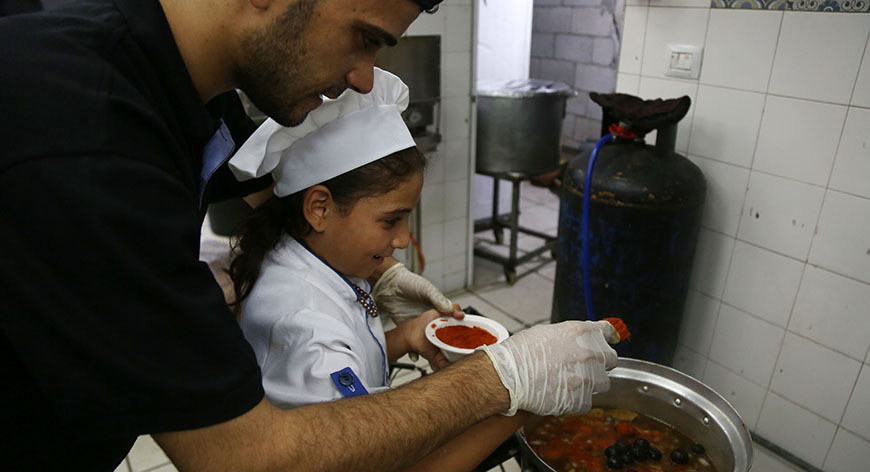 Amin Mashharawi, a 22-year-old chef, helps his young trainee add a pinch of sumac to a dish during the culinary course at Zad Al Khair restaurant at Gaza, Aug. 5, 2017 (Photo by Majdi Fathi)

Khalil Ifranji, director of Zad Al Khair, told Al-Monitor that the idea to have cooking classes for kids, a first in Gaza, was spurred by a lack of social and entertainment programs for children.

“When we first announced the kids culinary program, nearly 500 kids applied. We selected 120 and divided them into small groups, to be trained by the restaurant’s cooks at different times," he said.

The program’s coordinator, Hiba Ifranji, 21, told Al-Monitor that participants attend a three-hour training session daily, and that they obtain a certificate at the end of the free 40-day training program.

She said some Italian cooks contacted the restaurant and expressed their willingness to help teach Gazan kids how to prepare food. The Italians plan to arrive in Gaza as soon as possible for this purpose.

In the training station at the restaurant, 6-year-old Khaled Abu Obeid was observing the trainer preparing the schnitzel sandwich he loves.

Obeid told Al-Monitor that he joined the program because he loves cooking. He added, “My grandfather has always encouraged me to learn how to cook, because he is an excellent cook, and he is the one who prepares lunch when my aunties come to visit.”

Although Obeid’s plan is to become an engineer, he also wants to be good at cooking, like his grandfather.

Mashharawi, who has been a cook since 2010, told Al-Monitor that “the kids are taught some cooking basics and how to use kitchen utensils such as knives. They suggest what kind of dishes they want to prepare, and then we take off from there.” 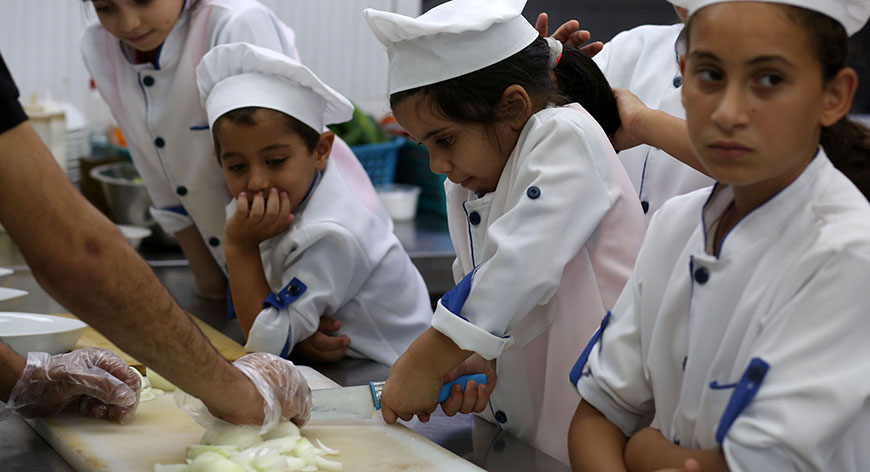 Gaza's young chefs learn to be careful with knives during the culinary course at Zad Al Khair restaurant, Aug. 5, 2017 (Photo by Majdi Fathi)

He added, “We teach the kids what sort of ingredients they need for making simple meals such as musakhan, various sandwiches and sweets such as the cream-filled semolina cake.”

During the training, the children wear the traditional chef's uniform, including the toque, and prepare the food under Mashharawi’s ongoing supervision. He guides their hands when onions and chicken are cut, making sure no accidents occur.

As part of the training program, the children learn kitchen safety tips such as to stay a safe distance away from flames, not to hold hot utensils and how to hold knives safely.

Hiba Ifranji hopes to have the necessary financial and human resources to turn this program into a culinary academy for kids and adults. Some of his students are just as ambitious. Sana, for example, not only wants to become a cook when she grows up, but to have her own culinary YouTube channel.