Gazan chef Nagham Skaik inaugurated the Honey Yum Yum summer camp for children, in light of the lack of government interest in children and the lack of children's activities in the besieged enclave. 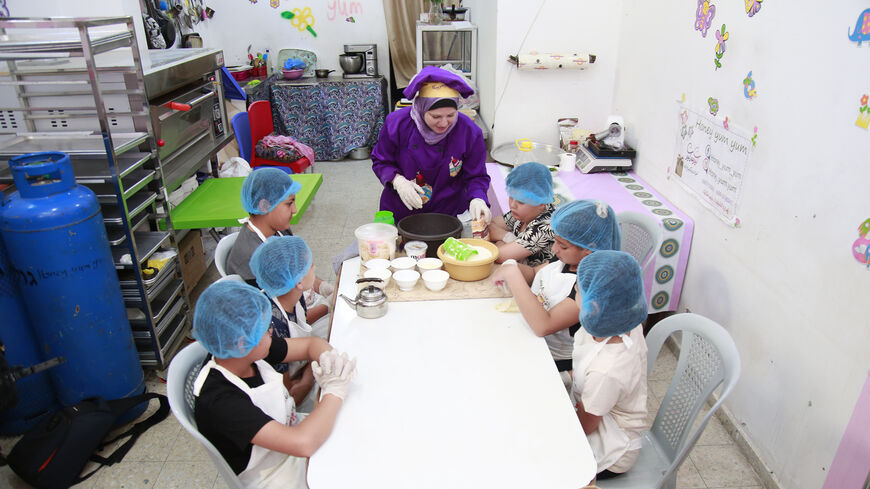 Holding small knives, children carefully cut colorful fruits to decorate the cake they made with chef Nagham Skaik at the young chefs summer camp in the Gaza Strip.

Entsar Murtaja, 10, who was writing down the ingredients for a recipe in her notebook, told Al-Monitor, “I loved the idea of ​​a cooking camp, and its name — Honey Yum Yum — is very fun and attractive. I have always wanted to help my mother in the kitchen. I am very happy I joined because I did not know how to use sharp tools correctly and I learned that it is better to wear gloves while preparing food. I also learned how to make pancakes, chocolate balls, delicious pasta and cake decorated with fruits.”

Adnan al-Baba, 8, told Al-Monitor, “I want to become a great chef in the future, like the ones I see on TV. I want to learn how to present food beautifully. I joined the young chefs summer camp to learn how to cook simple dishes at home. It’s not true that the kitchen is for girls only. I love being in the kitchen and helping my mother. I wish we would learn how to make a delicious Mexican chicken dish.”

Baba’s mother, Fadwa, told Al-Monitor, “There are no entertainment parks in the Gaza Strip. Children have nowhere to explore their talents. I found Honey Yum Yum to be a great fit, especially since my son loves cooking a lot despite his young age. He is very bright and is always watching cooking videos on YouTube. So I wanted him to join a training camp to learn and follow recipes correctly. I am very happy he is learning how to make crepes and burgers. Everyone at home loves tasting his cooking. A few days ago, he prepared cinnamon rolls and they tasted great.”

She added, “I hope we can have more summer camps like this in Gaza, where children can learn how to work together. I wish we could have a cooking academy for children.”

A summer camp for young chefs is a new idea in Gaza. The Honey Yum Yum camp started in June and has already received broad acclaim among Gazans, whose children have little to do during the long hours of power cuts and lack of activity camps. The latest war in May 2021 negatively affected the psyche of young children, and this camp contributes greatly to providing a safe environment for them.

Skaik founded Honey Yum Yum to help children between the ages of 5 and 15 learn how to cook and have something to do during the summer months. “We make cakes and pastries, foods for diabetics and low-fat meals. I did everything with my own money; no government or official agency has helped me,” she told Al-Monitor.

She said, “I targeted children because they are great in the kitchen. They focus, absorb and quickly apply everything they learn. There are almost no activities for children in Gaza. In addition, I found this to be a great way to teach children to love fruits, vegetables and healthy food.”

Skaik noted, “We launched on June 1 at the start of the summer vacation, and the children are very enthusiastic about cooking. We started with easy recipes, making salads and pasta, then switched to more complex ones, such as pizza, shawarma, cheeseburgers and fruit cakes.”

She explained, “The young chefs summer camp is a month and a half for five hours a day. We have 80 children enrolled. I divided them into weekly groups so that everyone can benefit. I gave them matching aprons and the top of the class are rewarded with gifts. I make sure the parents know that they do not need to worry about their children using sharp kitchen tools. We encourage children not to be afraid of working in the kitchen by teaching them the right methods.”

Skaik added, “Summer camps in the Gaza Strip do exist, but they are few and the fees are high, often amounting to $175 per month per child. The economic situation in Gaza is very difficult, and most children are currently more interested in modern technology, so I chose the idea of a cooking camp in a kitchen to attract children and enhance the spirit of sharing with their families. The fees are reasonable, at $7 per child.”

Skaik explained that she aspires to have a YouTube channel dedicated to educating young chefs and to eventually run a cooking academy for children in the Gaza Strip.