In the Middle East, just as in the Western world, the end of the year is a time for stuffed dishes — and for debating who started each long and rich tradition. 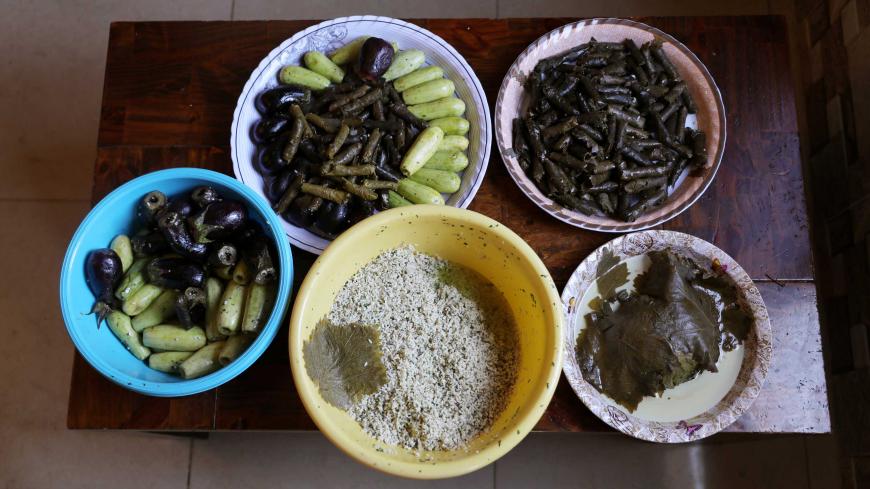 Ingredients for vine leaves and mahshy, vegetables stuffed with rice and minced meat, are seen on a table ahead of its preparation at a Palestinian home in East Jerusalem, Aug. 11, 2017. - REUTERS/Ammar Awad

In the West, the end of the year is the season of stuffing. Cooking websites and TV shows come up with endless stuffing recipes — BBC Good Food alone offers 26 of them, ranging from the traditional sausage, sage and onion to vegetarian alternatives.

Kitchens in the Middle East are no different. Stuffed vegetables, ground meat and spices in thin dough, and stuffed dates all claim a place of honor at Middle Eastern tables.

“Arabs in general — and Palestinians in particular — love to stuff our food,” says Reem Kassis, the author of “The Palestinian Table,” which was published by Phaidon last October. The book contains 150 recipes as well as engaging information on the culinary heritage, daily life and rich cultures of the Middle East.

Daughter of a Muslim mother and Christian father, Kassis was born in Jerusalem to a Palestinian family revered for both its cooking and its highly educated women. Kassis had a fast-paced corporate career before she started writing about Palestine’s culinary heritage. “I think my entire childhood is a series of ‘scenes’ of collective cooking. It’s ironic because this is both why I wanted to stay away from the kitchen as much as possible and pursue a professional career but also the very reason I ended up finding my way back to the kitchen today,” she told Al-Monitor in a Skype interview from Philadelphia.

“Prior to big occasions or holidays, my aunts would often be found in the kitchen rolling grape leaves or stuffing shushbarak,” she recalled. This Levantine ravioli, known also as "shishbarak" in Palestine, "tatarbari" in Iraq and "manti" in Turkey, is thin wheat dough parcels filled with ground beef and spices. Kassis’ recipe for lamb dumplings in yogurt sauce includes dried mint and roasted pine nuts.

“[Palestinians] stuff everything from vegetables — from carrots, cucumbers, eggplants, zucchini, tomatoes, potatoes, bell peppers, onions, cabbage and grape leaves — to meats such as whole chicken, lamb necks … even an entire lamb,” Kassis says in her book’s chapter on "mahashi," which usually refers to stuffed vegetables.

Her recipes for special occasions showcase the variety of ingredients Palestinians combine in stuffing: potatoes with sieved tomatoes and a touch of garlic; white zucchinis and baby eggplants with minced beef, rice and spices; rice-stuffed chicken — and the controversial grape leaves, a bone of contention between Turks and Greeks, with both sides claiming it their own.

“It would be very difficult to say whether the idea of stuffing is Turkish, Kurdish, Greek, Armenian or Arabic,” columnist and author Nedim Atilla told Al-Monitor. “Stuffing — or dolma, as we Turks call it — is a common culture of the Balkans, Anatolia, Central Asia and the Middle East. If we are talking about taking a vegetable or a leaf, stuffing it with meat or another vegetable and adding some rice and herbs, it would be very difficult indeed to pin it to a single location or to a single culture, particularly given that there was so much mobility in the region.”

“I do not know who made the first one, but I think our part of the world perfected it,” laughed Kassis. “The first references to stuffing food in Arabic cuisine I believe dates back to the 10th century to a book called “Kitab al-Tabikh,” compiled by Ibn Sayyar to document the Baghdad court dishes of the eighth and ninth centuries, although stuffing vegetables was not as common as stuffing meats and pastries back then. I think it was the Ottoman Turks who transformed the stuffing of vegetables into a daily culinary category. Given that Palestine and the entire Levant form a geographic continuum dating back to Ottoman and even pre-Ottoman times, it makes sense that this method of cooking influences what we eat today.”

But the common culture of stuffing shows variations according to locality, religion and wealth. That Kassis’ shushbarak/manti recipe contains pine nuts amazes Atilla, who points out that pine nuts — an expensive ingredient — are rare in daily cuisines. “Using apricots in stuffing, a practice of the Ottoman palace, also showed wealth — apricots, either fresh or dried, were expensive,” he explained.

Often, special touches show where a recipe comes from: Sour cherries added to the grape leaves recipes show that the roots lie in Greece, whereas the presence of tangy green plums comes from around Mount Kazdagi, better known as the mythological Mount Ida, where the Trojan prince Paris chose the most beautiful goddess and started the Trojan War. The taste of almonds and cinnamon gets stronger in dishes as their cooks approach Jerusalem and Beirut.

"It took a family and more often a village to dry vegetables and stuff food," explained Atilla. "So women — Christian, Muslim, Jewish — came together at the markets or houses. They learned from each other and adopted each other's recipes. Muslims who would never think about eating mussels developed a taste for the stuffed mussels their Greek Orthodox neighbors prepared. Today, it is the favorite summer food of Turkey, with 1.2 million stuffed mussels consumed daily in the city of Izmir [a city of roughly 4 million] alone — and who makes and sells them? Refugees from the eastern city of Mardin.

"Stuffing is a common culture, one that improvises, improves and builds bridges."