Younis Qatabri was severely injured in the school bus bombing in August 2018 in Yemen, and a year later he remains in pain and cannot walk unaided. 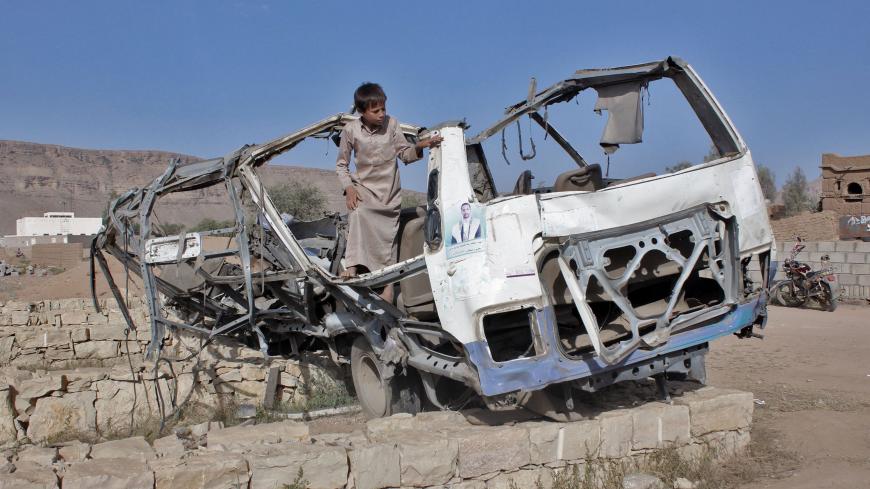 A Yemeni child stands in the wreckage of a bus that was hit by a Saudi-led coalition airstrike while carrying schoolchildren, at a cemetery in the Houthi rebels' stronghold province of Saada, Yemen, Sept. 4, 2018. - AFP/Getty Images

SAADA, Yemen — Aug. 9 marks exactly one year since an airstrike killed dozens of children on a school bus in Yemen’s Saada province. Though survivor Younis Qatabri doesn't remember much from that day, he grieves each time he thinks of his friends who died in the bombing.

“Sometimes I do remember them and I often cry,” Qatabri, 14, told Al-Monitor in a recent interview.

“Those whose death hit me the most were [brothers] Osama and Ali Zaid al-Homran,” he said, referring to his classmates who were on a field trip marking their graduation from summer school.

Osama Homran was the schoolboy who took a video of his classmates playing and yelling on the packed school bus before it was hit by a Saudi-led coalition airstrike.

The coalition at first defended the bombing that killed 38 schoolboys, saying the airstrike was a “legitimate military operation" in response to a Houthi ballistic missile that had targeted the kingdom's Jizan province the day before. Yemen has been torn by war since 2015. Iran is believed to be backing Houthi rebels against the pro-Saudi government.

Coalition spokesman Col. Turki al-Malki told CNN after the attack that the airstrike that hit the bus was aimed at a “legitimate target.” He even said, “No, [there were] not children in the bus,” adding, “We do have high standard measures for targeting.” But the coalition later admitted that the strike was “unjustifiable.”

Bus driver Hussein Jarad told Al-Monitor, “There were about 72 children on the bus,” although its official capacity was only 26 passengers. While Jarad said he survives today with no injuries, he was treated for two months for trauma.

Qatabri, however, lives in pain. He spoke to Al-Monitor as he sat in a room with two crutches nearby on the second floor of his house in Saada; a wheelchair he uses was parked near the home’s gate.

He said that as a result of the bombing, “My legs are not functioning properly. I am in pain every day. I can’t walk.”

He pointed to an image hanging on the wall over his head and said, “Look, this is a picture of me when I was a little boy and fine.”

Qatabri’s mother complains of the miserable experience she, too, has been through. She carries the boy down the stairs and back up to the second floor when he wants to go outside or needs to go to the hospital.

But all his parents want is enough money to buy honeybees so that bee products can be used as an alternative treatment (apitherapy) for easing their son’s pain and caring for his wounds. The treatment is very common in Yemen, but Qatabri's parents can’t afford to buy bees as the father only occasionally works at farms and has no fixed income.

As Qatabri struggles with his recovery at his home, which is only about 100 meters (nearly 110 yards) from the Dahyan market where the bombing took place, the Houthi-affiliated local authority in the city is preparing to commemorate the victims there Aug. 9.

Abdul Wahab al-Seteen, a teacher from Saada, told Al-Monitor the victims’ families will be invited to the ceremony.

“The aim is to condemn the international silence over such massacres; this one was a crime by all means,” Seteen said as he sat next to remnants of the school bus.

Seteen said he believed the attack was a “premeditated crime and a systematic targeting of children and education in particular.”

Just last month, on July 29, Yemen’s warring parties traded accusations about another airstrike, one that targeted the busy al-Thabet market of the Qataber district bordering Saudi Arabia. That attack killed 13 people, including two children, and injured 23, including 11 children, a medical source told Reuters. The injured had to pass through the Dahyan market to get treatment in Saada city.

Al-Monitor visited the Dahyan market in the Majez district, where memorials with the names and photos of the victims were erected as a reminder of the tragedy.

Jarad, a 55-year-old father of five boys and three girls, stood near the remnants of the state Education Department's bus he drove for four years.

“I used to transport about 2,800 male and female pupils to schools outside Dahyan town, as the … five schools in the town were closed because of the airstrikes,” he said. Jarad also said he took students to summer classes after the regular school year ended.

On the day of the attack, Jarad left home at 7 a.m. He had decided not to take his grandchildren with him as they had previously gone on the same field trip.

Children boarded the bus from the grand mosque in the area and had gone to a cemetery for victims of the war in al-Juamalah area, north of Dahyan, before passing through the Dahyan market on the way to Saada city.

Jarad stopped the bus to get some refreshments at the market.

Then a bomb hit the middle of the bus, turning it upside down and catapulting it near a barbershop. The barber was killed.

“The strike occurred at 8:21 a.m.,” said Seteen, the teacher who witnessed the attack. He said two of the children who survived were lucky in that “they were out of the bus with their father getting refreshments in the market.”

Another family was not so lucky. “Zaid Tayyeb was waiting in the market while his three sons had just boarded the bus minutes before the strike. The three were killed,” Seteen recounted.

Some of the students sitting in the back of the bus survived with serious wounds, as the impact sent them through windows, according to Jarad. But none of the children in the front survived.

“I lost consciousness when I saw the blood and guts of the children around me,” said Jarad, who was at a market shop when the explosion occurred. “I felt like any father who had lost 72 children."

Zaid Ali al-Homran, a guard at a cemetery where victims of the attack are buried, said he lost two of his four sons — Qatabri's friends Osama and Ali. A board hanging in his office at the cemetery shows pictures of all those killed in the bombing. It reads, “America kills Yemen's children.” The United States has supplied the Saudi effort with billions of dollars' worth of weapons, despite congressional opposition.

Osama Homran, who took the video inside the bus before the airstrike, had asked to borrow his father's phone on the eve of the school trip. “Osama insisted I let him take my phone,” said Zaid Homran, 72. “First, I refused, but then his mother intervened and I ended it up giving him the phone.”

“They [Osama and Ali] were up all night excited about the trip,” he said, adding, “They screamed, 'We will have the best trip in the world.’”