Turkey, US agree to coordinate on Syrian buffer zone

A deal to jointly control a strip of territory now held by Syrian Kurds could reduce friction between Turkey and the United States after Ankara threatened a unilateral military intervention, but some human rights advocates say Turkey will use it to put Syrian refugees back in harm's way. 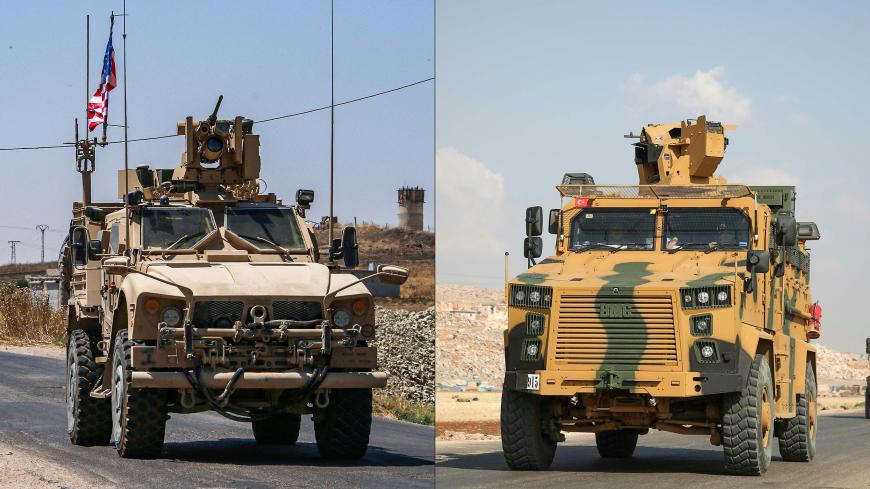 This combination of pictures created on Aug. 8, 2019, shows armored vehicles of the US-led coalition driving in the town of Ras al-Ain in Syria's Hasakah province near the Turkish border on July 28, 2019, and a convoy of Turkish armored vehicles driving toward the Bab al-Hawa crossing point between Syria and Turkey on a highway in the northern countryside of the Syrian province of Idlib on June 20, 2019. - AAREF WATAD/AFP/Getty Images

ISTANBUL — Turkey and the United States appear to have sidestepped a confrontation over northeast Syria by agreeing to jointly establish a buffer zone after protracted negotiations had inflamed tensions, prompting Ankara to threaten to invade an area where US troops are present.

Details on the agreement, including the main sticking points of the zone’s size and which military force will command it, were scant in statements from the Turkish Defense Ministry and US Embassy in Ankara released late on Wednesday.

Turkey wants a “safe zone” to secure territory south of its border that is now largely controlled by a Kurdish militia that captured the land from the Islamic State, backed by American firepower. Ankara considers the militia, the People’s Protection Units (YPG), a national security threat because of its ties to Kurdish insurgents who have waged a three-decade war for autonomy inside Turkey.

The agreement, which followed months of warnings by Turkey that it would unilaterally expel the YPG, appeared to forestall an imminent invasion by the Turkish military amid a large-scale troop deployment at its border. Turkey is outraged that the Pentagon has seemingly sought to protect the YPG, which it lists as a terrorist group, after President Donald Trump said in December he would withdraw American soldiers from Syria.

The deal may also accelerate Turkey’s efforts to repatriate Syrian refugees who have found a safe haven here from their country’s eight-year war that has killed nearly a half-million people.

The two sides agreed “to stand-up a joint operations center in Turkey as soon as possible in order to coordinate and manage the establishment of the safe zone together [and] that the safe zone shall become a peace corridor, and every effort shall be made so that displaced Syrians can return to their country,” the embassy said in a statement whose language was mirrored in another by the Turkish Defense Ministry.

Neither said they had resolved the dispute over the size of the buffer zone. The United States had proposed a buffer zone 14 kilometers (9 miles) deep, while Turkey had sought control of territory more than twice that large.

Turkish Foreign Minister Mevlut Cavusoglu did not respond to a question about the size of the zone, telling reporters on Thursday the agreement “was a very good start.”

But he added that Turkey will not stand for delays in its implementation. “Either all the terrorists who pose a threat will be cleaned up, or we will do it on our own. The Americans saw our determination on this matter,” he said.

President Recep Tayyip Erdogan, who has threatened a military assault as recently as Tuesday, when he called on Washington to behave like a “true ally,” said the process would begin with the establishment of the joint command center. No timetable was given. “What really matters here is that a step will be taken east of the Euphrates River and this will be realized together with the Americans,” he said at a press conference on Wednesday.

The row had ratcheted up tension between the NATO allies, but it is just one of a series of issues that has fractured the once close relationship. Trump is supposed to sanction Turkey for its purchase of an advanced Russian missile system, but Wednesday’s deal may now reduce the friction.

The Syrian regime described the US-Turkish deal as “blatant aggression against [its] sovereignty and territorial integrity,” according to the state-run SANA news agency. A Syrian Foreign Ministry official warned that the Kurds “bear the historical responsibility for that emerging situation.”

Aldar Khalil, a member of the Kurdish political administration in northern Syria, was quoted as saying the deal could herald “a new approach” but that his side still needed to see the details.

In addition to checking the YPG, Erdogan has long claimed a “safe zone” would allow his government to repatriate some of the 3.6 million Syrians who have found refuge there from their country’s eight-year war. Turkey is heaving with the world’s largest population of refugees and has a six-billion-euro deal with the European Union to curb irregular migration to the bloc. Ankara is angry over Brussels’ failure to fulfill a pledge to lift visa requirements for Turks.

Already, Turkey is cracking down on migrants, requiring them to leave Istanbul, the country’s biggest city and home to an estimated 1 million Syrians, this month if they are registered in other provinces. It is also hastening returns to Syria, though the government insists such repatriation is done on a voluntary basis.

The measures come in response to rising public frustration as an economic downturn fuels anti-migrant sentiment. Analysts point to the weak economy and the refugee crisis as factors in the losses Erdogan’s party suffered in recent local elections.

Only those who volunteer to return are taken to areas under the Turkish military’s control after two earlier operations into northern Syria, a senior immigration official told reporters last week, denying reports by rights groups and refugees themselves who say they are being coerced into signing documents and taken to Idlib province, now besieged by a Russian-backed Syrian government offensive to retake the last rebel stronghold in the war.

“Now they’re openly saying they will take Syrians to this buffer zone, using Syrians as bargaining chips. There is only one condition in which Syrians can return home: the war ending … and ensuring Syria is both a legally and politically sustainable place for people to live,” said opposition lawmaker Ahmet Sik. He was speaking on Thursday at a press conference in Istanbul organized by a refugee advocacy group, We Want to Live Together, which claims “thousands” of refugees have been forcibly returned to Syria since July. Other nongovernmental organizations have given varying numbers, with some putting the total at about 400.

A report by the initiative said some detainees have been mistreated by police. One person who was deported was shot and killed this week by security officers as he tried to re-enter Turkey, it said. It was not possible to immediately verify the claim, and Turkey has previously denied troops have fired on people attempting to breach its border.

“Syrians’ humanity is being completely ignored,” said lawyer Gulseren Yoleri of Turkey’s Human Rights Association. “In order to be permitted to control the safe zone that is being planned, Turkey is negotiating to send Syrians there … or threatening Europe it will open the border gates once again.”