The bitter legacy of Turkey in Afrin

Afrinis fear the destruction of religious and historic sites, and ethnic cleansing in Turkish-controlled Afrin is helping in the resurgence of Islamic State and other al-Qaeda affiliated groups. 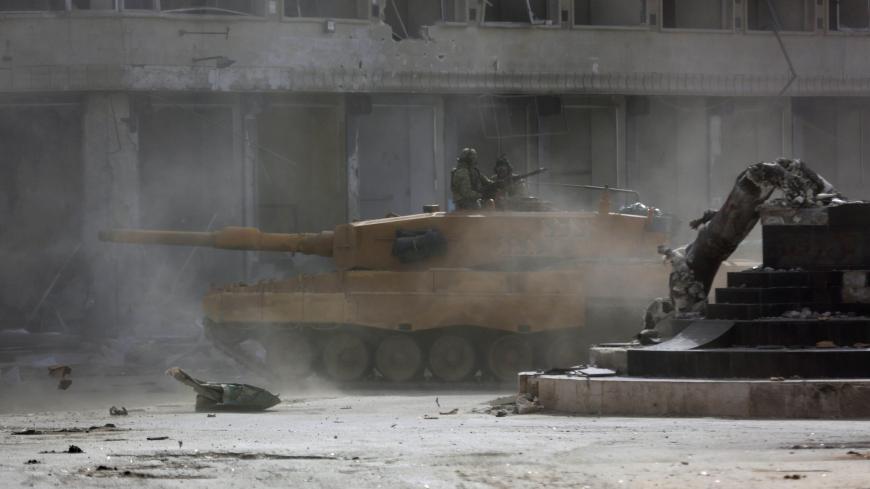 Turkish soldiers ride on a military vehicle as a Kurdish statue that was pulled down is seen in the center of Afrin, Syria, March 24, 2018.

“We did not learn from Afrin; that is how we are in this mess in Idlib,” said a two-star retired major general when news about the harassment of the Turkish army’s Morek observation point by Russian-backed forces broke. Turkey started its second cross-border military operation, this one named Operation Olive Branch, in January 2018, which resulted in the capture of Afrin province in northern Syria (the first was Operation Euphrates Shield). Completed in the span of two months, this operation is seen as a military success in Ankara. Unlike Operation Euphrates Shield, which mobilized twice as many Free Syrian Army (FSA) soldiers as the Turkish army, Operation Olive Branch relied on Turkish soldiers (on a three-to-one ratio with the FSA) — mainly commando units and gendarmerie. Today, the Afrin area is controlled by Turkish-backed forces. Turkey has been insistent on a safe zone and is determined to push Kurdish forces away from its border. The Olive Branch mission was to cleanse the region from the Kurdish People’s Protection Units. Yet all Afrinis suffer under ethnic, cultural and religious cleansing.

Turkish Radio and Television reports that Afrin, now “freed of terror," continues to operate at a "normal pace.” Nevertheless, the same report says that gendarmeries continue their training to combat terrorism and battle mines and traps. What really has happened in Afrin since March 2018?

Al-Monitor spoke with Afrin residents, researchers, senior Democratic Union Party officials, as well as members of the Turkish armed forces who have participated in Operation Olive Branch. Three categories require attention: the destruction of historic and holy sites, confiscation of property and natural wealth, and kidnapping of Afrin residents for ransom. The end goal of all three tactics seems twofold: the expulsion of Kurds, Alevis and Yazidis, or the Sunnification and Arabization of Afrin, and accruing financial gains to pay off FSA militias.

General Secretary of the Kurdish Democratic Unity Party in Syria Muhyadin Sheik Aley told Al-Monitor, “As soon as the Turkish forces and their mercenaries entered the city of Afrin and its environs, they began to destroy the most prominent monuments, most notably a monument of Newroz Kawa, which has great importance for Kurds because of its meanings of freedom and beauty in the mythology of the people of Afrin.

The destruction of shrines — most notably the shrine of Mohammad Nuri Dersimi in the Sheikh Hanan cemetery — and of holy places, the cutting of perennial trees scattered in most villages and districts of the region of Afrin that have historically served as shrines for all Kurds are especially important to the adherents of ancient religions. Distinct and ancient religions — Yazidism, Zoroastrianism and lovers of Imam Ali — have survived for centuries against the prevailing authorities of the central state. Amed Dicle, a seasoned journalist who visits the region frequently, explained that Dersimi — a well-known Kurdish intellectual — escaped from the Dersim province of Turkey along with other Alevi families in the early years of the Republic (1938) as people of Dersim were prosecuted.

A local resident and researcher who asked for anonymity said the grave of Dersimi’s wife, Farida, was also destroyed. This was a sign of “deep hatred and abuse by armed forces,” she said, adding that she found three main reasons for the Turkish-backed desecration and destruction of holy sites: financial gain, racism (anti-Kurdish) and religious domination. Even trees that people view as sacred and where they come to make wishes with little ribbons were targeted in the region. But the olive trees were specifically important, as several stories over the year have been reported on the confiscation of olive oil and how it is marketed to EU countries via Turkey.

The researcher added, “In many cases, the tombs and shrines were bulldozed and vandalized for theft, where the graves are exhumed in search of gold and precious objects and archaeological finds — especially tombs on the hills — and the looting and theft of the contents of some mosques such as solar panels, batteries, electrical appliances, sound equipment and carpets.” Dicle concurred, “My sources from the archaeology directorate in Afrin confirm that about 16,000 artifacts were stolen from the region.” The region had 144 historic locations, but Ain Dara is where most of the artifacts were taken and smuggled into Turkey for sale. Multiple reports and aerial images show the extent of the damage since the launching of Operation Olive Branch.

The researcher reckoned that “22 Yazidi villages experienced vandalism of gravestones, including that of Sheikh Hamid.” Turkish-backed local authorities have alleged that the destroyed gravestones were against the new law, which requires their height to be lower. For the locals, these kind of arguments are a replica of those they have seen with the Islamic State (IS). Several Alevi shrines where people come to find solace were looted and destroyed, including Yagmur Dada, Ali Dada and Aslan Dada in the Bulbul district.

Turkey has not just destroyed shrines and ancient historic sites; it has also engaged in construction projects. Aley said, “They destroy ancient sites to replace them with private mosques and mosques supervised by the graduates of institutes and religious colleges. … Afrinis view this as Turkish chauvinism. They are actively promoting the Turkish language and raising the flag of Turkey on the premises of circles and institutions outside the borders of the Turkish state, which arouses animosity among the people.”

Turkey’s official religious body, the Diyanet, has deep investments in the region. The Afrini researcher added that Turkish forces are building mosques particularly in Alevi villages, where no one attends mosque. Erecting mosques and paying imams in Alevi towns with no congregation has indeed been a long tradition of the Diyanet in Turkey. The building of mosques is seen as a step toward forced conversions. “It is as if we are preparing the region for militant jihadists [al-Qaeda and IS-affiliated groups], and my colleagues who served in the area suffer from the moral humiliation of the way the operation evolved,” said the retired Turkish general.

Aley was also concerned about the forces “setting fire to the forests and jungles, yet first harvesting olives and cutting valuable trees for their logs and coal industry.” Dicle added that "11,000 hectares of forestry" has "burned down to the ground” since Operation Olive Branch began.

Aley confirmed several other reports from the region about hundreds of Afrin residents being kidnapped for ransom. He said, “These are systematic acts. The Turkish authorities continue to pursue them [with kidnapping, destroying natural sources and desecrating holy places] in Afrin, with the aim of emptying them from their indigenous peoples in order to effect and perpetuate demographic change, by bringing in crowds of Turkmen and Arab families from outside Afrin and forcibly settling them while offering incentives and privileges to them. Turkey gives ample room for its jihadist aides to carry out kidnappings and arbitrary arrests of civilians in Afrin for financial blackmail, committing crimes of murder and torture, seizing the property of the people, and confiscating houses, vehicles and agricultural mechanisms to close the doors of work and production.” Aley’s observations highlight that locals are terrorized with fears of being kidnapped, and unemployment and poverty are on the rise.

Aley’s following statement is alarming as worries about an IS comeback spread: “What is striking is the movement of new jihadist elements from Idlib province and the Euphrates Shield areas of Jarablus, al-Bab and Azzaz toward the districts of Afrin. They are … stationed in camouflaged places and headquarters. These areas can be used as fertile ground and turned into bases and platforms for planning and launching transcontinental terrorist acts, as was the case in Manbij under the control of [IS] there,” said Aley. His perspicacious explanation was based on his knowledge of the terrain and resources of Afrin province.

The atrocities of Turkish-back forces in Afrin shows that Ankara is not interested in solving its own Kurdish problem or even securing its borders. The current policies only help expand the Kurdish problem and security vulnerabilities on the Syrian border. Unintended consequences of this policy can be costly for both Turkey and the region.