The Donald Trump administration automatically rescinded a $3.5 billion deal to sell Patriot missile defenses to Turkey after it took delivery of a Russian alternative in July, US officials have told Al-Monitor. 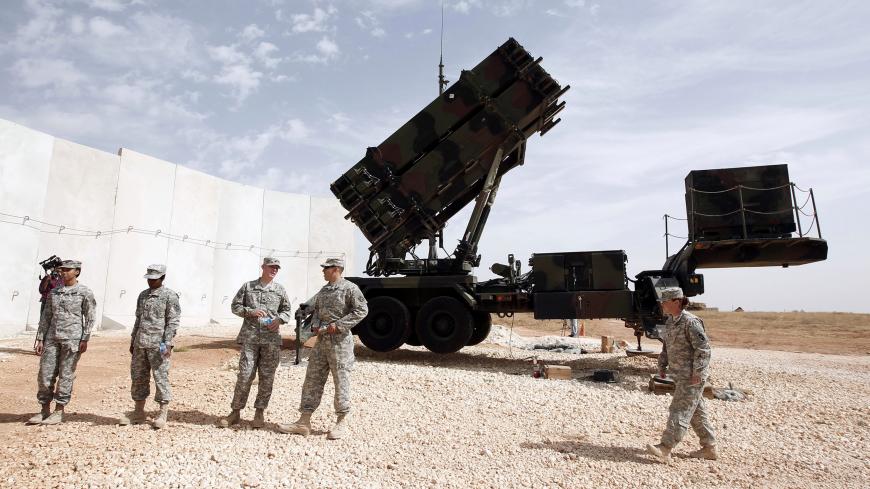 US soldiers stand beside a US Patriot missile system at a Turkish military base in Gaziantep, Turkey, Oct. 10, 2014. - REUTERS/Osman Orsal

The Donald Trump administration automatically rescinded a $3.5 billion deal to sell Raytheon-produced Patriot missile defenses to Turkey after it received the Russian S-400 system in July, Al-Monitor has learned. The cancellation had previously not been reported.

The move denies Ankara a potential off ramp to remain aligned with NATO-compatible systems. Turkey had periodically sought Patriot batteries provided by the alliance to ward off threats to its airspace from Syria.

“We have consistently told Turkey that our latest offer of Patriot would be withdrawn if it took delivery of the S-400 system,” a State Department official told Al-Monitor. “Our Patriot offer has expired.”

During the tenure of Patrick Shanahan as acting defense secretary, the Pentagon had indicated that it would take the offer for the discounted American missile defense system off the table if Turkey took delivery of the S-400, a move widely seen as a major shake-up in Ankara’s nearly 70-year association with NATO.

In a press conference five days after Turkey took possession of the Russian system, however, Deputy Undersecretary of Defense for Policy David Trachtenberg left open the possibility that Ankara could still close the deal for the Patriots. Trachtenberg resigned from his post days later.

“We've offered the Patriots to Turkey numerous times,” Trachtenberg said. “If Turkey's interested in Patriots, they will let us know.”

The State Department approved the sale of the Patriots in December, after Turkey had twice passed on the system, first agreeing to a deal for a Chinese system, which it later abandoned, and then purchasing the $2.5 billion S-400 in 2017.

US officials were concerned that the S-400’s radar could passively spy on F-35 fighter jets, prompting the Trump administration to drop Ankara from the F-35 program. Turkey made portions of the fuselage and landing gears and had planned to host a depot to overhaul engines for the fighter aircraft.

Despite a two-year-old US law that requires sanctioning major purchasers of Russian military equipment, President Trump had hesitated implementing penalties against Turkey, despite pleas from Republicans in Congress to do so. The Countering America’s Adversaries through Sanctions (CAATSA) law, which Trump signed in August 2017, was revised a year later to allow waivers for American allies in Asia who are broadly divesting from Russian systems. Experts told Al-Monitor earlier this year that such lenience would not likely be extended to a NATO ally like Turkey.

“I think there has been a process foul with CAATSA, but that that saga isn’t over, and will be taken up again,” Aaron Stein, director of the Middle East program at the Philadelphia-based Foreign Policy Research Institute, told Al-Monitor. “Looking ahead six months, what we have is Turkey operating S-400 and no congressional willingness to cut Turkey or Trump slack. The Patriot is the second thing to drop, following the F-35 unwind.”

A House aide told Al-Monitor the Russia-focused sanctions were designed to undercut a major portion of Moscow’s economy by denying Russian military sales to US allies.

Though the Pentagon ordered Turkish pilots and maintainers training on the F-35 to leave the United States by July 31, it remains unclear whether Washington has reimbursed Ankara for the four F-35s already in its possession. Turkey is set to take its second shipment of the S-400 in 2020, Reuters reported last month.

Meanwhile, the United States and Turkey appeared to make progress on Aug. 22 toward an agreement on a safe zone in northern Syria as Defense Secretary Mark Esper and his Turkish counterpart, Hulusi Akar, spoke by phone in an effort to advance its establishment.