Israeli voters who still hold out hope for a plan to resolve the Israeli-Palestinian conflict should ask themselves whom they would like to see leading the negotiations. 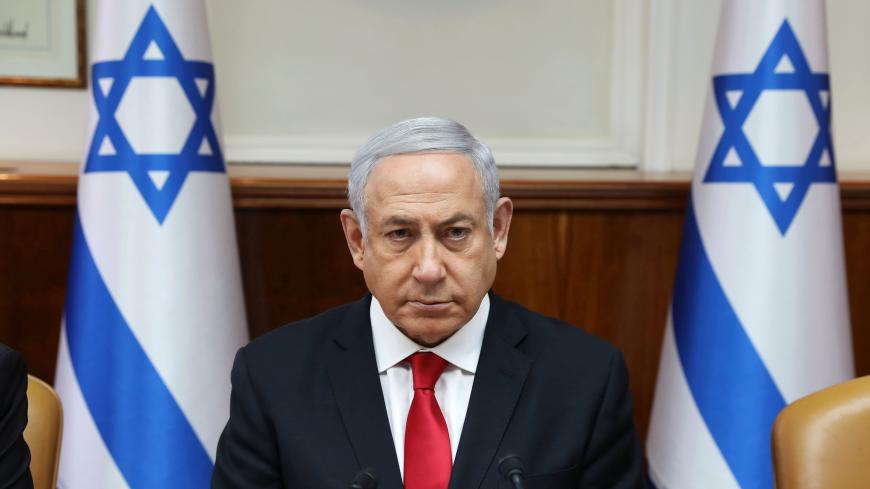 The Facebook page of the Poleg Ir-Yamim neighborhood, in the coastal town of Netanya, is generally used to issue warnings about community hazards and to offer recommendations for plumbers and the like. This week, it was tainted by a political warning-cum-recommendation when Deputy Mayor Aharon Orgad of Kulanu shared his impressions of a meeting with Prime Minister Benjamin Netanyahu about preparations for the Sept. 17 election.

Given that the meeting with the 15 politicos had been closed to the public, Orgad apologized for having to scrimp on details, but still had to offer up some sort of tidbit: “You know what? Take one sentence from the meeting.… ‘Listen, in another two-three days, or another month or two, [President Donald] Trump’s peace plan will be published soon,’” Orgad wrote, quoting Netanyahu. ‘Now, I ask you — Whom would you want to see conducting negotiations on this plan?!’”

Obviously, the question was rhetorical given that Kulanu was recently subsumed by the Likud, and its 15 representatives are willing captives of Netanyahu. The Kulanu joiners, like their fellow Likud candidates, were also instructed on Aug. 4 to sign a pledge of allegiance to the Likud’s supreme leader, promising to support Netanyahu and Netanyahu alone to form the next government. The question the prime minister raised at the closed-door meeting should, however, trouble every Israeli voter who (still) holds out hope for an actual “deal of the century.”

Is Benjamin Netanyahu, indeed, a statesman worthy of conducting negotiations on a plan designed to bring about an end to the Israeli-Palestinian conflict and terminate the suffering of both peoples? Is he willing to offer territorial concessions in the West Bank to enable the establishment of a demilitarized and viable Palestinian state? Is he willing to make the territorial concessions in the West Bank for which he has a partner in the most moderate of Palestinian camps? If the answer is “yes,” does he have the political power to discuss a compromise over East Jerusalem and its holy sites that would be acceptable to the most pragmatic of Muslim clerics?

The formal answer to the first question was splashed across the front page of the Aug. 6 edition of Yisrael Hayom, the pro-Netanyahu freebie tabloid. In a rare opinion piece bearing the prime minister’s byline, Netanyahu pledged to establish a right-wing government and under no circumstances to seek a unity government with the center-left. In other words, he has no interest in political partners for negotiations with the Palestinians.

Such was also the case in February 2015, when Netanyahu declared that he would never form a unity government with Labor Party leader Isaac Herzog and his political partner, Tzipi Livni. “It won’t happen,” Netanyahu insisted. “[There is a] deep ideological rift between us. I am in favor of a united Jerusalem under Israeli sovereignty, they are against. I am against giving up Judea and Samaria [West Bank] because any area given away will become a terrorist base of radical Islam, and they are in favor.”

A month later, Netanyahu reiterated the motif of ceding West Bank territories to radical Islamist control in an interview he gave to the NRG news website a day before Israelis went to the polls. “I think anyone who is going to establish a Palestinian state and to evacuate territory is giving radical Islam a staging ground against Israel,” he warned, also accusing the political left of “burying its head in the sand, again and again.” The “left” included the Labor Party, which he said was fielding “radical and anti-Zionist” candidates. Two months earlier Netanyahu had warned, “There is no link [common ground] between the responsible, national perception of the Likud under my leadership and the leftist and irresponsible list of Tzipi and [Herzog].”

Despite all this, shortly after the swearing in of Netanyahu's fourth government, he asked this “radical left” to join his government, to shore up his shaky 61-seat Knesset majority. Contacts between the sides peaked in mid-2016, when Netanyahu and Herzog flew to Cairo at the invitation of Egyptian President Abdel Fattah a-Sisi. The Egyptian leader promised that if a unity government were installed in Israel, he would organize a regional peace conference with the participation of the Gulf states. During the negotiations on a unity government, Netanyahu pledged to Herzog that he would support a two-state solution and curb construction in the settlements. It all blew up when the Likud’s ultra-hawkish wing found out about the talks and scuttled them.

“I told the prime minister and Herzog that this was not what we had established a government for and this was not what the people wanted,” Minister Yariv Levin recalled in March 2019. “The people elected a right-wing government, and not left-wing policy, and that is why neither the Likud nor the public that voted for us would approve such a document.” Herzog summed up the failed attempt to form a unity government in stating, “Netanyahu ultimately proved that political survival was more important than taking a historic step.”

Following the April 9 elections this year, Netanyahu again turned to Labor, offering its chairman, Avi Gabbay, a seat in the government he was trying to form. When word of the offer leaked, both sides panicked at the criticism leveled at them from the left and the right, and the rest is history. Netanyahu called new elections.

If Netanyahu was troubled in those days by his political survival constraining his freedom to make concessions and talk peace, the pending criminal indictments hanging over his head have clipped his wings even further. One telling example was his Aug. 11 decision to roll back his order, based on the recommendation of security officials, banning Jews from entering the Temple Mount due to the confluence of Jewish and Muslim holy days. He withdrew the order shortly after a junior minister in his caretaker government, Transportation Minister Bezalel Smotrich, lashed out at him: “Mr. Prime Minister, if you do not have the guts to take this decision [to allow Jews to pray at the site] by yourself, convene us and we'll accept responsibility.”

On that same day, Smotrich also reacted to a district court decision against ultra-Orthodox holding a gender-segregated event in the town of Afula. He insulted the court, declaring, “The judicial system is stupid,” and blamed the court’s decision on “a weak prime minister.” Smotrich added, “[t is under Netanyahu that] a hundred percent of this craziness is taking place. Zero leadership. Zero governability.” As prime minister, Netanyahu is the one trusted with Israel’s interests and with defending national pride, but this time around, he looked the other way and made do with a weak apology by Smotrich. He ignored the insults and curses hurled at the court and didn't even demand that Smotrich apologize to the judges.

Dozens of people, including Israeli police officers, were injured in the rioting that erupted on the Temple Mount after Jewish worshippers entered the area in the midst of the Muslim Festival of Sacrifice (Eid al-Adha). Jordan protested the violation of the status quo. Smotrich, however, “praised” Netanyahu for giving the order to open the gates to the site, calling it “a correct decision, proving that political and public pressure have the desired effect.” This dubious compliment takes us back to Netanyahu’s question cited by his impressionable guest from Netanya: “Whom would you want to see conducting negotiations on this plan?!”

In light of the unilateral measures adopted by Trump thus far in supposedly promoting Israeli-Palestinian peace, measures that have bestowed short-term benefits to Israel and created a deep rift with the Palestinians, the correct answer is Benjamin Netanyahu. He is the foreign politician with the most influence over the American president. Obviously, Trump is inclined to please his Israeli counterpart and ally. Nonetheless, the right question is not who is worthy of conducting negotiations with Trump on his crippled, so-called deal of the century, but who is really interested in serious negotiations with Palestinian President Mahmoud Abbas on the basis of a two-state solution. So far, all we have seen is a prime minister enabling the transfer of suitcases full of Qatari money to Hamas, which in turn strives to establish a Palestinian state in the stead of Israel. Thus, there is only one answer to that question. Anybody but Netanyahu.