Israel's year of the undecided voter

Undecided voters will determine the outcome of the April 9 elections and with that the fate of the Arab Peace Initiative, which the Arab League endorsed yet again at its annual summit but has not registered on the radar of Israeli candidates or the media. 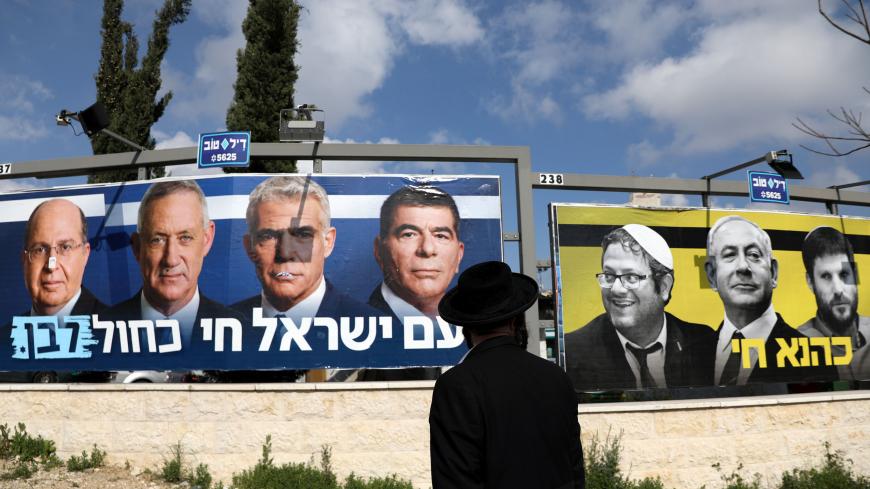 Israeli pundits were busy on March 31 shoveling through the mud that candidates on the right, left and center of the political spectrum have been slinging at each other. The job has been ongoing since the campaign for the April 9 elections began.

There was the latest update on Prime Minister Benjamin Netanyahu’s alleged involvement in the scandal stemming from Israel’s purchase of German naval vessels. Then there was in-depth analysis to be done on why Netanyahu rival Lt. Gen. (res.) Benny Gantz, leader of the Blue and White party, stuttered during an interview and the deconstruction of an interview by Lt. Gen. (res.) Gabi Ashkenazi, a Gantz colleague from the Blue and White. Talk shows and call-in programs speculated about the real reason the outspoken television presenter Oshrat Kotler had taken a leave of absence. Nine days before the elections, news editions also found time to report that a pelican had been found meandering along a major highway. Not a word, however, was said about the final communique of the annual Arab League summit that wrapped up March 31 in Tunis with discussion of the Palestinian issue.

Who cares that the Arab states reiterated support for their 2002 peace initiative with Israel? So what if the Arab League insists on once again offering Israel full diplomatic relations and peace based on the 1967 borders? More so, they are offering it despite the booby traps placed in their path by Netanyahu and his friend President Donald Trump: the relocation of the US Embassy from Tel Aviv to Jerusalem and US recognition of Israeli sovereignty over the Golan Heights.

In November 2017, the Knesset held a special session at the request of more than 40 lawmakers to discuss the “diplomatic challenges facing the Israeli government in view of the latest opportunities” for peace. Knesset member Isaac Herzog, then chair of the opposition and leader of the Zionist Camp, turned to Netanyahu and said, “We are talking about a dramatic regional move and you know it exists.… Since 2009 you have missed historic opportunities time after time.” Herzog was referring to Netanyahu’s last-minute pullback from a regional peace initiative led by Egyptian President Abdel Fattah al-Sisi and Saudi Crown Prince Mohammed bin Salman.

Herzog urged Netanyahu to “make dramatic decisions and answer the question of how to ensure the future of the Jewish people’s nation-state.” He asked the prime minister whether he wanted his legacy to be one of “sit and do nothing until the Jewish majority is lost” and whether he wanted to be remembered for disseminating hatred and incitement against the attorney general, police commissioner and the media. As expected, Netanyahu answered that prime ministers can only be replaced at the ballot box and boasted that due to “our tremendous achievements, the public has decided over and over that I will stand here [at the Knesset podium], and you will sit there [on the opposition benches].”

Indeed, in democratic regimes, voters choose their leaders. The upcoming elections will not, however, be determined by the achievements of Netanyahu governments over the past decade in the healthcare, education, transportation and economic sectors. Defense will not be determinative, nor will his government's contribution to resolving the bloody conflict with the Palestinians and bringing about regional peace. Instead, the electoral outcome will be determined by those Israelis torn between casting an “ideological” vote or a “strategic” vote.

Poll findings announced March 31 on Channel 12 News revealed that 25% of voters are not enthusiastic about Netanyahu or Gantz as prime minister, with 38% preferring a fifth term for Netanyahu and 36% wanting Gantz to replace him. The rest do not support either candidate or are undecided.

On the left wing, the undecided voters are torn between supporting parties that reflect their views — such as Labor, Meretz or the Gesher, led by Knesset member Orly Levy-Abekasis — or voting for Gantz’s Blue and White, which prides itself on the hollow, “pragmatic” slogan “There is no left, and no right.”

On the one hand, these undecided voters are being told that a significant electoral advantage for Gantz and his running mate Yair Lapid over the Likud would boost their chances of forming the next government and getting rid of Netanyahu. There is also concern about “wasted” votes, those cast for small parties that ultimately do not garner enough votes to enter the Knesset. “Everyone understands that the only way to replace Netanyahu is to vote Blue and White,” Lapid, a centrist, declared on March 31. “There is no choice, even Labor Party people should vote Blue and White because a Labor vote ensures Netanyahu will remain in power.”

On the other hand, the left remembers that the same Lapid had joined Netanyahu's right-wing government in the past and incited against the human rights organizations Breaking the Silence and B’Tselem. Not only that, Channel 13 aired recordings of Gantz talking in private meetings about the possibility of including Netanyahu’s Likud in a government that he would head and even possibly joining a Netanyahu-led government. The Labor Party then warned, “Anyone voting Blue and White will be responsible for forming the next Netanyahu government.” An undecided leftist would therefore do better voting his convictions, saving himself from a morning-after election hangover.

Perhaps, however, it is important to ensure that the Defense Ministry not be put in the hands of the hardliner and New Right leader Naftali Bennett and that the nationalist Knesset member Bezalel Smotrich not be entrusted with the Education Ministry. Maybe it would be better to leave the door open for the “deal of the century” Trump’s administration is cooking up for Israeli-Palestinian peace.

Labor and Meretz argue that if Gantz is successful in cobbling together a government coalition, left-wing liberals must join it in order to counterbalance the Blue and White, which is heavy on right-wing conservative candidates. Life is hard for the undecided. Having a far easier time of it are those who have concluded that this is not the time for such “luxuries” as peace and human rights and that removing Netanyahu is the only goal.

On the right on the political map, the undecided voters are vacillating between a strategic vote for the Likud and a vote for one of the more radical parties, such as the New Right, the United Right, Zehut, led by the libertarian Moshe Feiglin, or Yisrael Beitenu, led by former Defense Minister Avigdor Liberman. Then there is the option of Kulanu, the ‘softer’ right party headed by Moshe Kahlon.

The considerations for the right resemble those for the left: the desire to ensure that their leader, Netanyahu, is able to form a government that embraces the dream of a Greater Land of Israel weighed against reservations about the corruption scandals dogging him and his extravagant lifestyle. This camp, too, fears that voting for a small party could be a wasted vote if the party fails to get into the Knesset. On this side, as well, life is much easier for the “Netanyahu at all cost” voters, whose loyalty to their leader blinds them to the clouds of corruption and hedonism engulfing him.

From now until April 9, the two major parties will focus their efforts on attracting supporters of their satellites on the left and right but without removing the satellites from the running altogether by denying them sufficient votes to cross the electoral threshold and enter the Knesset. And what about the historic initiative for Arab-Israeli peace that was once again endorsed this week? It is not even in the running on April 9.