The cameras in Arab-majority voting stations are a ploy to excite the Likud's base while high voter rates in the settlements — where votes shouldn't even legally be cast — pose a much bigger electoral issue. 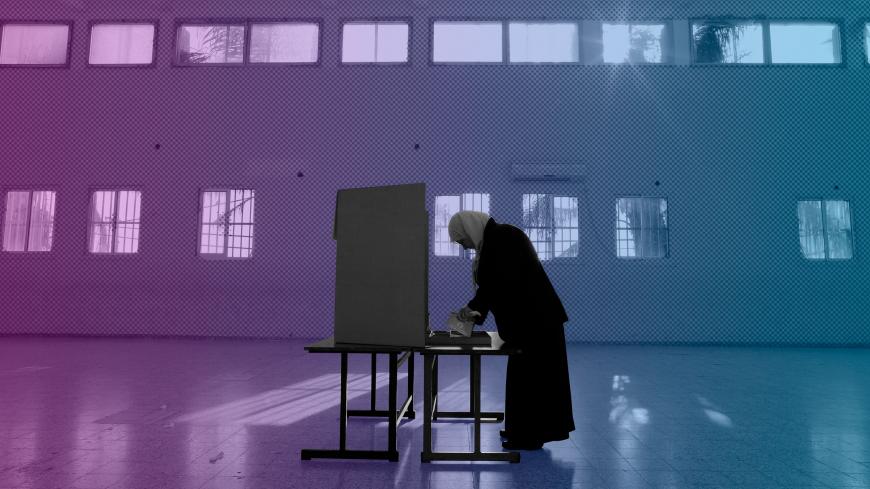 An Arab Israeli woman stands at a voting booth before casting her ballot at a polling station in the northern town of Umm el-Fahm, Israel, March 17, 2015. - REUTERS/Ammar Awad

It seems Prime Minister Benjamin Netanyahu will do anything to avoid a hearing before the attorney general and to gain the immunity that will keep him from having to stand trial. But in order to promote a law that would grant him that immunity, he needs to head the next government. That is why he and his Likud party hit the pause button for the entire country by holding two consecutive elections. It is also why the Likud has made efforts to install cameras in polling stations throughout the Arab sector the hot issue of the day in the Central Election Committee’s deliberations.

The Likud has said that the cameras are intended to increase transparency and preserve the integrity of the election, but the real reason is to discourage potential Arab voters. Such voter suppression is similar to the way black voters were treated in the United States in the late 19th and early 20th centuries.

This is exactly what Netanyahu wants. It is in his interest to keep the voting rate among the Arab population low, as it was in the April election at less than 50% (compared to a national rate of 68.5%). Polls suggest that if the voting rate among the Arab sector reaches that of the Jewish population this September, it will be practically impossible for Netanyahu to form a government, since he will not have a right-ultra-Orthodox bloc of 61 seats.

After the April election, Likud campaign manager Ofer Golan admitted that cameras had been installed in the Arab sector, explaining, “It was clear to us that this was a very powerful project that could change the outcome of the election.” The Kaizler-Inbar public relations firm, which was responsible for the move, boasted openly on Facebook that the cameras dropped the voting rate in the Arab sector to below 50%, or as they put it, “the lowest in years!” It is also worth noting that owner Sagi Kaizler is a former secretary general of the Samaria Settlers Committee.

Anyone involved with Arab society knows that Arab citizens have little motivation to go out and vote, and for good reason. Even if voter turnout among Arab Israelis is higher in September than it was last April, it does not look like an increase in their numbers will be enough to suddenly grow the center-left bloc at the expense of the right. Nevertheless, it is important for Netanyahu and the Likud to keep the camera issue alive because in today’s politics, the harassment and intimidation of minorities are key to exciting voters. Certain voters have a thirst for xenophobia and a hatred of minority groups. By getting these voters all worked up, the Likud will encourage them to vote for Netanyahu. It's exactly what Trump does with his supporters and what Netanyahu infamously did in 2015 by warning, “The Arabs are heading to the polling booths in droves.”

Netanyahu tends not to rely on the same trick twice, so it should come as no surprise if Netanyahu is busy working on some other ploy while distracting the public with talk about cameras. It is not beyond the realm of possibility that the Likud will send observers to Arab polling stations to provoke the kind of reactions that will force the police to intervene. It would impact the orderly voting process and possibly even result in the closing of certain polling stations.

If the Likud really wants to use cameras in polling stations to ensure the election’s integrity, why not install them in all polling stations? Why only in Arab towns and villages?

And since when is one party or another responsible for electoral integrity in the first place? That is why the country has law enforcement. Attorney General Avichai Mandelblit said as much in an official opinion he sent to the chairman of the Central Election Committee, Justice Hanan Meltzer, stating that legislation is required to install cameras in polling stations and that administrative rulings by the Election Committee are not enough to make these cameras legal.

Another question worth asking Netanyahu and the Likud is whether anyone considered what happens in the settlements. After all, while the nationwide voting rate in April 2019 was about 68%, it was about 78% in the settlements, with some locations even exceeding 90%. Such a vast discrepancy in the voting rate should raise red flags for those calling for transparency.

We should probably also ask why there are polling stations in the settlements in the West Bank in the first place. After all, their legal status is in question. The State of Israel never annexed them, it never imposed Israeli law there and they are not legally a part of the State of Israel. According to Israeli law, only Israeli official envoys, diplomats and citizens on official state business can vote outside of Israel. All other Israelis can only vote in place. Why is the right to vote for the Knesset denied to any citizen overseas but granted to people who live outside Israeli territory in the settlements, where the government puts polling stations right next to their homes? That no one demands that the settlers show up to vote in the State of Israel proper is evidence of a clear case of discrimination in their favor, and that the motivation is entirely political.

In the end, people insisting on electoral integrity should check into what is happening in their own backyard before going after a minority group.