The response of Prime Minister Benjamin Netanyahu to revelations about past visits by Knesset members to Palestinian security prisoners is a blatant attempt by him to delegitimize the left. 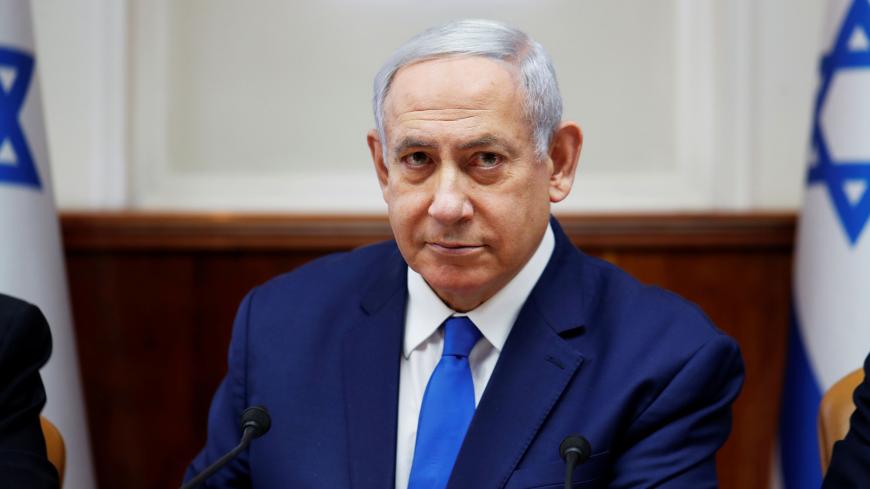 On Aug. 6, Channel 12 News released a list of Knesset members who had visited Palestinian security prisoners in Israel in past years. Soon after, Prime Minister Benjamin Netanyahu tweeted an incendiary response, targeting the left: “Tonight’s news about past visits by Knesset members from left-wing parties to prisoners convicted of murdering Jews shows how warped and dangerous the left is.” Netanyahu was referring to two people in particular: former Meretz Knesset member Haim Oron and the current chair of Labor-Gesher, Knesset member Amir Peretz, who is also a former defense minister. Both men had met with Marwan Barghouti at Hadarim Prison.

The list recorded more than 200 visits to Israeli prisons from 2010 to 2016. Some were to prisoners who had been involved in deadly terrorist attacks that claimed the lives of dozens of Israeli citizens. Most of the visitors were Knesset members from Arab political parties, including Ahmad Tibi, Jamal Zahalka and Aida Touma Suleiman. Barghouti, serving five consecutive life sentences plus 40 years for alleged involvement in terrorist attacks, was cited in the report as the prisoner who had received the most visits. In 2016, Internal Security Minister Gilad Erdan banned Knesset members from meeting with prisoners convicted of terrorism or security-related offenses by preventing them from invoking parliamentary immunity to skirt the restriction.

The timing of the story — released in the heat of an election campaign — was hardly by chance. It had the clear political motive of serving the interests of the Likud and its leader. Netanyahu's despicable response, targeting the left — Peretz and Oron are, in fact, Zionists and patriots, acting for what they believe to be in the interest of the state — was intended to harm Peretz in particular. As expected, angry reactions from the right flooded social networks, with much of the wrath and indignation aimed at the Labor-Gesher leader.

Netanyahu, fighting for his political life, will go to battle over every vote to ensure that the right-wing and ultra-Orthodox parties win 61 seats on Sept. 17 without the cooperation of Yisrael Beitenu leader Avigdor Liberman. He will wage this war on every imaginable front, both publicly and far from the spotlight. He attacked Peretz, because Peretz is trying to win support from voters on the soft right and even from traditional Likud supporters. Netanyahu lashed out at him in an attempt to scare off those potential defectors.

Netanyahu is well aware that there was nothing warped or dangerous about Peretz and Oron visiting Barghouti. True, Barghouti, as head of Fatah’s military wing, the Tanzim, during the second intifada (2000-2005), was thus responsible for many deadly attacks. That said, it is impossible to ignore his stature among the Palestinian public. He may be a convicted terrorist, but he is also a relevant political leader.

Oron, speaking on Channel 12 News, to explain his visits, said, “Many people consider him to be one of the most prominent figures in Palestinian society. I thought it was important for him to have a connection with Israeli officials, so we had dozens of meetings on a regular basis. In fact, we had more meetings than you listed.”

What Oron did not say was that meetings with Barghouti — which took place under Prime Ministers Ariel Sharon and Ehud Olmert — were held with the knowledge and approval of Israel’s leadership. In fact, the visits were used to relay messages back and forth and to mediate between the parties. Israeli leaders were fully aware of the influence Barghouti wielded over Palestinian security prisoners, not to mention the Palestinian leadership.

Peretz hinted as much in his own response to the article, when he tweeted that he had made the visits for the sake of national security. He asserted that they focused on issues he can't publicly discuss and were held with the full knowledge of the highest echelons of the Israeli defense establishment, which received reports on everything said.

Barghouti didn’t just receive visitors. Some Knesset members, and ministers as well, also called for his release. The most prominent of these was Binyamin Ben Eliezer of the Labor Party, who argued as far back as 2007 that Barghouti’s release would be in Israel’s interest, estimating that he could be cultivated to become the next Palestinian leader. Ben Eliezer, in defense of his position, said, “If we were willing to speak with [PLO leader] Yasser Arafat, whom we considered the greatest murderer of Israelis, we can discuss the release of Marwan Barghouti.”

Ben Eliezer, who died in 2016, had been a brigadier general who, like Peretz, served as defense minister. He was also a patriot who believed in the diplomatic process. In 2009, two years after Ben Eliezer's call to release Barghouti, he joined Netanyahu’s second government and served as a Security Cabinet member. He supported Labor forming a government with the Likud after Netanyahu managed to convince him that he intended to launch a historic diplomatic initiative. Netanyahu was certainly aware of Ben Eliezer’s feelings about Barghouti, but that did not prevent the prime minister from including him in his government.

Since then, Netanyahu’s rhetoric against the left has become increasingly extreme for decidedly political reasons. The problem is that this style of campaigning comes with a cost. He may be able to stop a few votes on the soft right from drifting to Labor-Gesher, but he is delegitimizing Peretz along the way.

On another front, Netanyahu has been busy looking for ways to reduce the number of votes cast in the Arab sector, based on the understanding that the higher the percentage of voters in that sector, the bigger the center-left bloc will be. In the April election, the Likud invested millions of shekels to install surveillance cameras at polling stations in Arab towns and villages, allegedly to prevent voter fraud. Many Arab voters were, in fact, intimidated by the cameras and relinquished their right to vote. It is one of the reasons that the voting rate among Israeli Arabs in the last election registered an all-time low, at less than 50%.

With the September election approaching, the Likud moved to re-create this “success” by increasing the number of cameras. On Aug. 8, the Central Election Committee met to discuss petitions claiming that the cameras infringe on the right to a secret ballot. The committee's decision is forthcoming in days. It seems likely that the cameras will be banned this time around, at the recommendation of the attorney general.

Without polling station cameras, Netanyahu will have to find other, more creative ways to suppress the Israeli Arab vote, while at the same time increasing the percentage of votes on the right as much as possible. If he succeeds in delegitimizing Arab members of the Knesset and parties on the left, he can get his base to run to the voting booth to “keep the right in power.” That is why, as the election nears, Netanyahu’s campaign to delegitimize the Arab Joint List and the center-left parties will gain momentum.

Judging by the tactics he has thus far employed, including leaking the list of Knesset members who visited security prisoners and his efforts to install cameras in polling stations, there is much more to come.