The problem that most concerns Israel's Palestinian citizens is personal safety, an issue on which the Blue and White could make significant positive contributions and in doing so attract Arab voters, potentially breaking the prevailing electoral deadlock with the right. 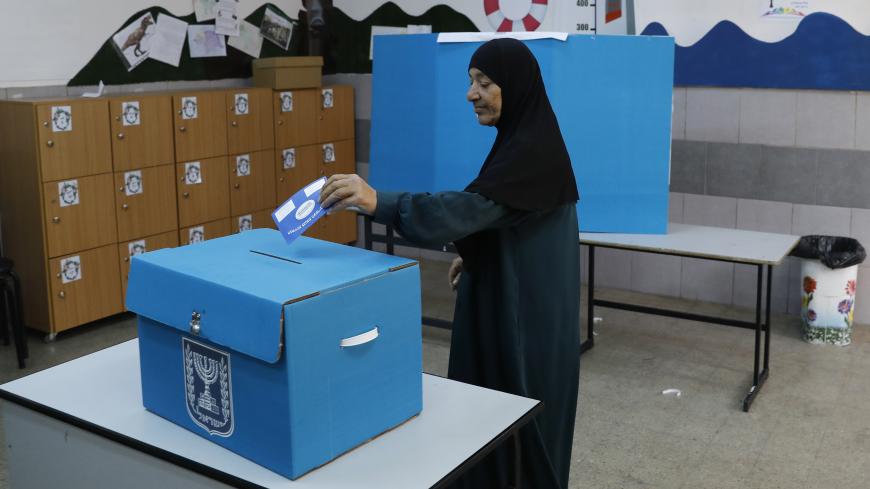 In the past as Israeli elections approached, television news programs would begin with the anchors promising to share new poll results during the broadcast. The audience would anxiously wait for the predictions, generally until the latter half of the broadcast. Viewers had no choice but to sit through all sorts of other, usually less interesting stories. The hearts of politicians would skip a beat during each sampling, and viewers could feel tensions rising as election day approached. This campaign season, however, with elections for the 22nd Knesset rapidly approaching, it is hard to find anything more boring than the polls.

Survey results these days are consistently similar, even when compared to those from weeks and months earlier. The right and center-left blocs each poll at 54 to 56 seats, and Avigdor Liberman’s Yisrael Beitenu polls at 10 seats. It seems highly unlikely that any of the major parties will fail to pass the electoral threshold. If anything is happening, it is taking place within the blocs.

The Blue and White’s promise to attract votes from the right, and Labor leader Amir Peretz’s assurances that Labor-Gesher can win support from the periphery have yet to be realized. The same dynamic holds on the right, where none of the parties has managed to draw siphon from the other bloc. This includes the religious Yamina (Rightward), which had selected the secularist Ayelet Shaked as its leader in the hope that it would win votes from secular Jews who respect tradition.

While the media is pouring enormous resources into trying to generate interest in the election, it appears to be in vain. To date, the most newsworthy stories seem to be the decision by the Labor-Gesher chair to shave his trademark mustache and the bizarre phone calls made by the wife of Minister Rafi Peretz slandering Yamina's Naftali Bennett, who was forced to relinquish his brief tenure as leader of the religious right. What could break the standoff between the blocs is voter turnout.

The greatest unexploited potential for increasing the number of votes is turnout among the Arab population. That more than half of this voting bloc stayed home for the April 9 election means that under certain specific circumstances this sector could determine the outcome of this month's election. That sector would, however, have to bring the same percentage of voters to the polls as the Jewish sector.

Ostensibly, circumstances have changed for Palestinian Israeli voters. The creation of the Joint List was one reason for an increase in voter turnout among this sector in 2015. The party breaking up before the April elections contributed to the decline in voter participation, but the party has reemerged, meaning more Arabs could again come out to vote.

All indications are that the Arab parties will not reject every opportunity to block the right from forming a government. They might even be willing to join a new government, as infuriating as that sounds to many Arab Knesset members and as much as they half-heartedly deny it. All of this could change the overwhelming feeling among many Palestinian Israelis that their representatives have no impact in the Knesset.

Furthermore, on Aug. 26 the chairman of the Central Election Committee barred the deployment of cameras in polling stations in Arab communities. The use of cameras in these stations during the April 9 elections was a clever move by the Likud. It caused many voters to fear that the prying eyes of government were watching them vote, even though there were no cameras in the actual voting booths. Without the deterrent of Likud activists filming, it is safe to assume that the number of Arab voters will increase.

On the other hand, the Blue and White is still indicating that it wants nothing to do with the Arabs. It has said that it will not coordinate in advance with the Arab parties to block the formation of a right-wing government and that under no circumstances will representatives of the Joint List be part of a new center-left government. Such a position could discourage Arab voters from going to the polls.

Over the last few years, considerable effort has been made to understand why Arab voter turnout is so much lower than Jewish voter turnout. On the face of things, the Arabs would seem to have a greater stake in government decisions. They certainly face discrimination in budgeting. On the other hand, if they had more Knesset representation — or rather, if the number of Arab representatives faithfully represented their actual percentage of the overall population — they could have greater influence on budgets allocations for their sector.

The fact is, however, that many in the Arab community feel that there is no real difference between the Israeli right and the left and that their own representatives have let them down time and again. As happens in other sectors, the only time Arab candidates visit their constituents is right before an election, after which the politicians forget about them until the next election. Furthermore, while everyone makes promises to the Arabs, the only person to have actually kept his promises was Prime Minister Yitzhak Rabin, and he was assassinated … by Jews.

As it turns out, Arab voters’ priorities are quite different from those of Jewish voters. What makes this interesting is that most parties and politicians on the center-left, as well as others, could promise to address these voters’ agenda and actually keep their promises. The results of an in-depth survey conducted two months ago and recently released by Channel 12 found that Arab voters have one key issue: personal safety in Israel’s Arab towns and villages. No other issue — not health care, education or peace between Israel and the Palestinians — polled anywhere near as important.

Over the years, Arab localities have become a battleground between gangs, racketeers and frustrated youth. Vast stockpiles of small arms, which are used without the slightest hesitation, have been assembled. At some point, the leaders of the Arab community decided to try to sweep the problem under the rug. They claimed that it was not as bad as it seemed and that they could take care of it. They would speak with the heads of families and put an end to the violence plaguing their communities.

Today, Arab leaders admit that the problem is too big for them alone to handle. They speak openly about how serious the situation has become in the “Wild West,” which is how many of them describe it. The same environment is prevalent among the Bedouins in the south, in the Triangle (in Israel’s Central District) and in the north. All too often, innocent bystanders get caught in the middle of these feuds, some sustaining serious injuries or paying with their lives. Parents are unable to control their kids so people are afraid to walk the streets at night. They need the government to intervene.

Israel Police stations have become the focus of people's rage toward the government. Whenever there is an eruption of violence, public rage is first directed at the police station and then at the local social security office. The outnumbered police officers in these towns are unable to respond to large mobs and often require reinforcements. The bottom line is that meeting the internal security needs of Arab towns and villages will require much more resources than what has typically been allocated. The larger towns need much bigger police stations, and new stations should be established in smaller towns where there are none.

If a party like Blue and White were to recognize this problem and express a willingness to advocate for the resources and funding necessary to ensure a greater and more effective police presence in the Arab sector — proposing practical plans for dealing with the problem over the next four years — it would be an important contribution to improving the living conditions of the Palestinian citizens of Israel. This, in turn, could encourage these voters to take part in the upcoming election.