The Al-Abbas Combat Division, which is part of the Popular Mobilization Units, has no link with Iran and has a long history of cooperation with the Iraqi army and the US-led coalition against Islamic State. 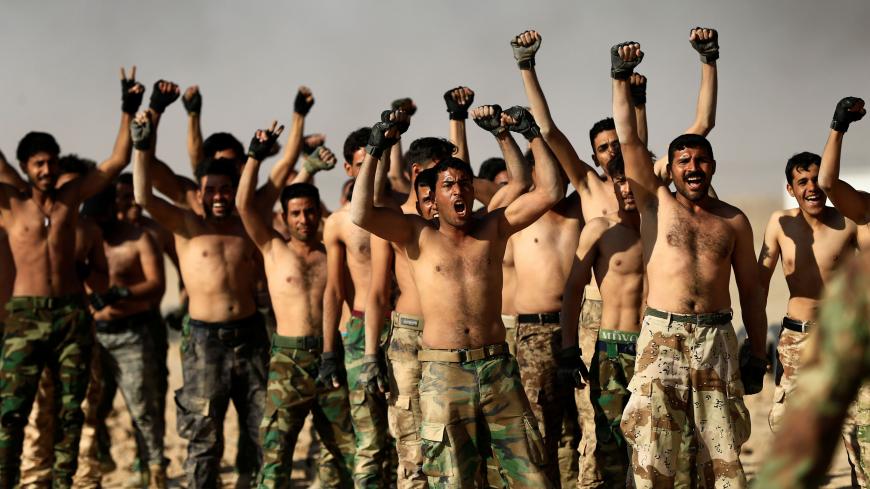 Along the 220-kilometer (137-mile) main road from Karbala to the border with Saudi Arabia there is a vast open desert that also extends to Syria and Jordan. While some of the checkpoints on the road are manned by the Iraqi army or police, most are controlled by a Popular Mobilization Units (PMU) group known as the Al-Abbas Combat Division. The organization is funded and politically backed by the custodian of the shrine of Imam Al-Abbas, Sayyed Ahmed al-Safi, Grand Ayatollah Ali Sistani’s representative in Karbala.

Every few kilometers, the flag of the group could be seen at a checkpoint, along with a group of fighters with military-style clothing. Sajjad, a fighter at the al-Nukhaib crossroad, 120 kilometers (75 miles) from the Saudi border, said he had chosen to fight and sacrifice his life for Al-Abbas ibn Ali, who was killed in the Battle of Karbala in 680. Al-Abbas ibn Ali was the son of Shiite Islam's first imam, Ali ibn Abi Talib. Sajjad said his commitment to the Al-Abbas Combat Division is a commitment to the maraji, the senior Shiite clergy headed by Sistani. The fighter indicated that he wanted to fight for Iraq, and that with this faction he is not linked to any outside, foreign agenda.

It is rare for a PMU group not to have links with Iran, and this makes the Al-Abbas Combat Division one of few exceptions within the PMU, which reports directly to the Iraqi prime minister.

“We were normal people who decided to fight to preserve their dignity after Daesh (the Islamic State) took wide areas of Iraq,” said Abu Ali, a field commander. Abu Ali said the Al-Abbas Combat Division and the Imam Ali Brigade, whose main operations are in Najaf, were the first to respond to the call to battle the Islamic State in 2014 by Sistani, who is based in Najaf. Abu Ali said, “One of Daesh's main goals was to enter Karbala and Najaf and destroy the shrines to humiliate our people; we left everything and took to the fronts to prevent this from happening.”

The commander started explaining how the faction fought across Iraq, and that today it operates drones and uses night vision binoculars, among other equipment. When asked about the source of financing for the group, he said, “The Imam Abbas shrine pays for all these; we are part of that establishment, they pay our salaries, finance our operations. In addition, other investments are being made to take our work a step further. We recently launched our first military tank.”

The tank, the Al-Kafeel 1, was unveiled by the group June 3. Maythan al-Zaida, the group's secretary-general, said the project involved upgrading an old Russian T-55 tank using Iraqi ingenuity. Zaidi said the project produced a “tank that competes with modern tanks such as the M1 Abrams in military surveillance,” adding to it a camera with a 360-degree field of vision and extending its range of vision to 4 kilometers (2.5 miles).

On the road, several buses carrying pilgrims returning from Mecca passed by. A retired colonel in charge of the division in the area told Al-Monitor that one of their main duties is securing the hajj road. He added that before his division took responsibility for the road, very few pilgrims used this route because of the threat the Islamic State posed in the area. The officer, a veteran from the 8-year Iran-Iraq War in the 1980s, recalled how he joined the division back in 2014. “I retired several years earlier, but when the IS surge started, I and other veterans were contacted by the Abbas shrine to help organize this division; we joined knowing that this is a sacred mission, and we’re going to continue to do our duty until the maraji tells us that we can rest.”

The colonel, who introduced himself as Col. Mohammed, hinted that the division is in direct coordination with Iraqi national security and military forces, where every move is agreed on. He said whenever the group foils an attempt by the Islamic State or arrests any of its operatives, the Al-Abbas Combat Division hands the militants over the Iraqi government. He said the division never holds onto the militants “because this isn’t our job, we hand them to them; our main duty is to help the government keep the area that was put under our control safe, and not to imprison and interrogate suspects.”

The commander Abu Ali told Al-Monitor that the government provided the division with night vision equipment, reconnaissance planes and weapons, and that when there is a need for other equipment, “The Abbas shrine allocates funds for us to buy and upgrade, all under direct auspices of the government.” He said there are no operational relations with any foreign states.

On Aug. 3, Iraqi Defense Minister Najah al-Shammari visited the division’s headquarters in Karbala, stressing that the ministry will continue to support the division. Zaydi said Shammari gave the group full authority and instructed the military to use the Al-Kafeel tank and to take advantage of the technological experiences and capabilities of the division.