The Mandaean community in Iraq is dwindling to such low numbers that its members fear extinction. 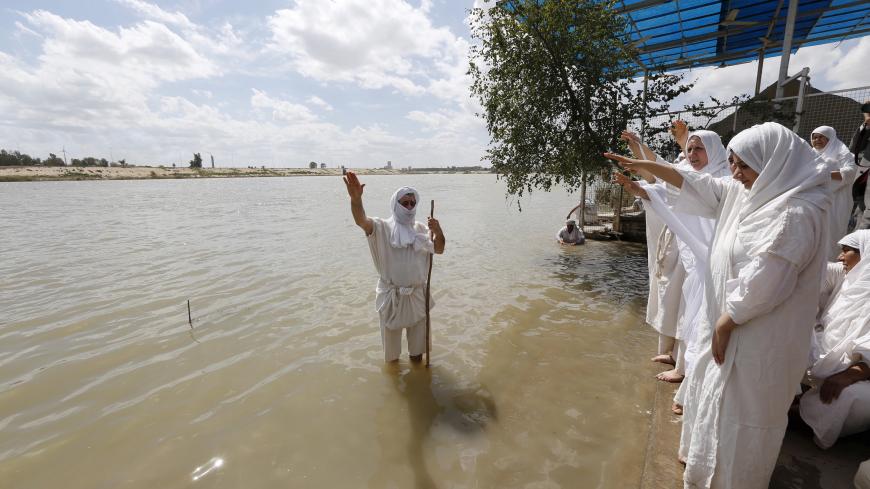 Between 2003 and 2019, 90% of the Mandaean religious minority left Iraq, according to Sattar Jabbar Helou, who heads the sect worldwide. This migration has had a profound impact on the Mandaean community in Iraq.

Neglected by the Iraqi government and even the international community, "the UN, the US and the EU rarely show concern for the future of the Mandaean minority, while unfairly focusing on the challenges facing Christians and Yazidis,” said Nadia Fadel Maghamiss, director of the Divan for Endowment of Mandaeans in Iraq.

Mandaeans fear the implications of such statistics on their dwindling community in Iraq. They fear extinction and political marginalization, as political demands in Iraq are often linked to demographics.

Mazen Nayef, the head of the Mandaean sect in Basra, told Al-Monitor that the province of Basra is now home to the most Mandaeans in Iraq. Even in the eastern province of Maysan, which borders Iran and has been a historical Mandaean stronghold, numbers have decreased. The Mandaean population in Baghdad has decreased since the US invasion in 2003, although two-thirds of Mandaeans had settled in the city since the 1960s.

Ghazi Laibi, the head of the Sabian Mandaean Council in Basra, told Al-Monitor that due to the relatively high Mandaean population in Basra, it is necessary to demand a Mandaean seat in Basra’s provincial council.

Helou expressed his concerns about the neglect of Mandaeans. “The Iraqi government believes that there is only a few thousand of us left and it does not pay attention to our demands," he said. "It would be much worse if there is proof that even less of us remain.”

A number of Mandaean political candidates in Basra previously joined other parties' candidate lists, but their efforts failed, as votes often take place on an ethnic or sectarian basis. It is hard to imagine Iraqis voting for a Mandaean candidate. Since the Mandaeans' demographic weight is weaker than other sects, it is unlikely that Mandaeans can win an election, even if all the Mandaeans in Basra voted for their candidate.

Nizam Kreidy, the head of the Mandaean sect in Maysan province, told Al-Monitor that Basra is attracting a wide number of Mandaeans from other provinces such as Maysan. Kreidy said that Mandaeans have migrated from Maysan in recent years to Erbil, the capital of the Kurdistan Regional Government (KRG), and abroad.

There are 400 Mandaeans in the Erbil government, stated the Ministry of Endowments and Religious Affairs. Approximately 35-40 Mandaeans are in Sulaimaniyah and four in Dohuk. Such modest figures explain why Mandaeans fear extinction. Al-Monitor estimates that 3,000 Mandaeans remain in Iraq.

Mandaean elites outside Iraq released "The Mandaean Pledge for Hope" document in July 2018, hoping to sound a warning cry about the danger of extinction. The document outlined the challenges of the Mandaean diaspora, noting that the extinction of the religion is imminent. “The Mandaean community has become scattered in small clusters in foreign countries where other values, traditions and religions prevail," the document reads. This has led "to the rupture of the Mandaean social fabric, and their customs and traditions have almost faded away."

Over 130 Mandaeans from 11 countries attended the Mandaean Hope Conference in Amsterdam Aug 18-19 to discuss the future of Mandaeans globally and in Iraq. The World Mandaean Youth Association was established with the aim of unifying the identity and efforts of Mandaeans around the world.

Debates during the conference demonstrated the need for internal reform. For a minority that embraces an ancient religion, with rites dating back 2,000 years, it must embrace the spirit of modernity.

The conference's final communique stressed “the positive handling of the data of the modern era with confidence and a firm desire for flexible integration, which preserves Mandaean cultural identity and supports Mandaean excellence and creativity for new generations.”