Iraqi minorities cancel celebrations of major events such as Christmas and New Year's in support of the protesters. 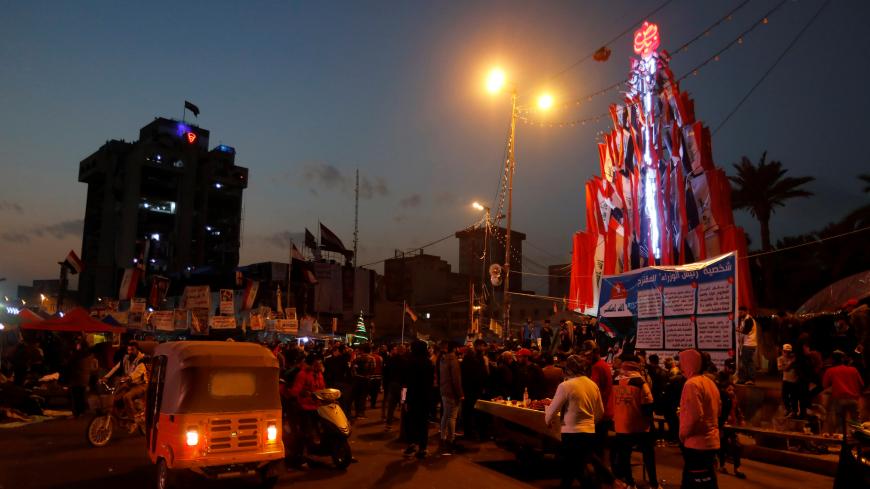 BAGHDAD — As young people in Tahrir Square were getting ready to erect a giant tree to celebrate their revolution in parallel with Christmas and New Year's Day, Christians in Iraq announced that they won’t be celebrating the two holidays this year out of respect for those who died during the demonstrators that broke out over the past two months in the country.

Despite the escalation of violence, the rising number of dead and wounded among the protesters and the uncertainty about the course of events, leaders of religious minorities announced their solidarity with the popular movement and said they would call off religious celebrations this year.

Cardinal Luis Rafael Saco, the Chaldean patriarch of Iraq, decided to call off the Christmas and New Year celebrations out of respect for the blood of those who died and for the wounded and in solidarity with the pain of their families.

A statement published on the website of the Chaldean Patriarchate said that there would be no decorated Christmas trees in churches and squares and that no parties or official receptions would be held at the headquarters of the Patriarchate. "This year, we will only pray for the souls of the victims and wish the wounded a speedy recovery. We will pray that normal life will be restored and that a homeland that includes all sects will be created.”

The patriarchate also called on Iraqis to “donate to orphanages and hospitals so they can purchase medical supplies for the wounded.”

The church also announced on its website that no night masses would be held at the churches of the capital, Baghdad, given the current sensitive security situation in Baghdad.

The statement said, “Mass will be held on Dec. 25, and we will be praying for an honorable solution to the existing crisis and for life to return to normal. We pray for the souls of the victims who fell, be they demonstrators or security forces, and we wish the wounded a speedy recovery.”

It also said, “We would like to remind everyone that we have called off all celebrations, including 'social parties' and decorations out of respect for the blood of the martyrs and in solidarity with the families of the wounded.”

Earlier, the presidency of the Sabian Mandaean community canceled the celebration of Dehwa Honina, observed Nov. 2. The Mandaeans instead held a collective prayer to ask that Iraq be protected and that the country be spared additional misery and destruction.

Sattar Jabbar Helou, the head of the Mandaean community worldwide, told Al-Monitor that the Mandaeans prayed “for the legitimate demands of the people to be fulfilled through services, equal opportunities and reforms that eliminate corruption.”

He said that the Mandaeans canceled ceremonies celebrating Dehwa Honina in Iraq and around the world.

Helou said that only religious rituals would be held in solidarity with the demands of the masses and out of respect for the lives of the victims.

Nadia Fadel Maghamiss, director of the Divan for Endowment of Mandaeans in Iraq, said the Mandaeans showed the highest level of solidarity with the demands of the masses, although most of the group migrated as a result of the chaos and poor conditions they faced in recent years.

However, she added, achieving reforms and fulfilling the vast demands of the masses may contribute to the formation of a government that represents the will of the people and does not reflect the wishes and interests of the political parties. This, she said, is a matter that would have a positive impact on the conditions of the Mandaeans inside Iraq as it would get rid of hate speech.

Maghamiss said this would also restore trust among Iraqis from various religious affiliations on the one hand and would restore confidence in a government that represents all of the Iraqi spectra on the other.

She said that this would encourage minorities, especially the Mandaeans outside the country, to return, particularly those who are still in neighboring countries such as Turkey and Jordan, before they take a one-way ticket to the West.

For their part, the Yazidis canceled the celebrations of the Fast of Ezi, which the supreme religious authority of the Yazidis announced would take place Dec. 20. This holiday is usually preceded by a three-day observance of fasting during which the Yazidis refrain from eating from morning until evening. When the fasting is over, Yazidis hold celebrations and exchange visits.

In addition, the social councils in the predominantly Yazidi towns of Bashiqa and Bahzani decided to call off the Fast of Ezi festivals in solidarity with and out of respect for the blood of those killed in the demonstrations in Baghdad and the south of the country. They said the celebrations would be limited to religious ceremonies only.

Saman Daoud, editor-in-chief of Ezidi 24, told Al-Monitor that this is an expected step in solidarity with the revolutionary young people who rose up against the sectarianism that destroyed the country. The Yazidis, he added, have suffered enough sectarianism in recent years; he also said they have worked on creating a comprehensive identity for all, although this is something that successive Iraqi governments have been unable to achieve.

The minorities, being indigenous to Iraq, are very aware of the importance of their land, Daoud said.

And despite being subjected to genocide in 2014 and to forced displacement operations since 2003, the minorities feel these protests have restored their link to the land of Iraq.

Saco said in an interview with Al-Monitor that he called on all political and security officials to take into consideration the seriousness of the situation and to listen to the voice of the young people in the protest squares.

He stressed the importance of avoiding a military solution that would lead to more casualties and called for “a rescue initiative with a new vision that can weather the crisis through dialogue with the demonstrators to achieve a comprehensive national project that saves the country and delights Iraqis.”

It should be noted that the protesters in Tahrir Square celebrated the Fast of Ezi through a march in support of Christians and announced that celebrations would be different this year as they mark “the return of the homeland.”