Is positive sentiment toward Israel on the rise in Iraq?

After an Iraqi ambassador made seemingly friendly comments about Israel, Iraqi politicians have made it known that Iraq will not stand for normalization. 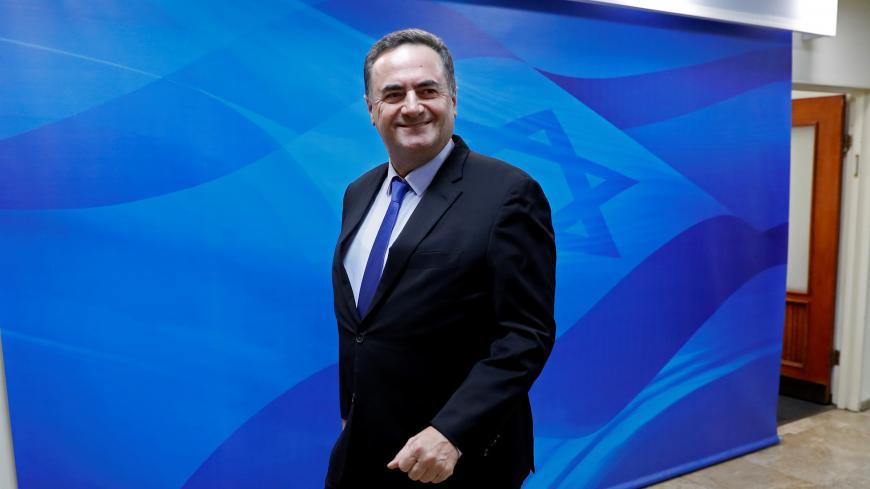 Israel's Transportation and Intelligence Minister Yisrael Katz arrives ahead of the weekly Cabinet meeting at the prime minister's office in Jerusalem, Sept. 12, 2018. - Thomas Coex/Pool via Reuters

Israeli Foreign Minister Yisrael Katz expressed his gratitude to Iraqis on Facebook July 24, stating he was thankful for Iraqi participation on the Israeli Foreign Ministry's "Israel in Iraqi Dialect" Facebook page. The message came on the first anniversary of the creation of the page, which gained notoriety last July for its broadcasting that a delegation of unnamed Iraqi journalists had visited Israel.

Meanwhile, in Iraq, the controversy surrounding normalization with Israel is heating up. The Iraqi ambassador to the United States, Farid Yassin, spoke at a Virginia seminar on Iraq's relations with Israel in July. In a video of the seminar released July 6, Yassin said, “There are objective reasons that may require establishing relations between Iraq and Israel, including that there is an important Iraqi community in Israel, who still cherish their Iraqi characteristics and traditions, especially in weddings and other events.”

However, the ambassador said that these reasons are not enough to establish relations with Israel, citing “moral and legal reasons that prevent any ties."

Yassin's statements were viewed by many in Iraq as a call for normalization with Israel. At the official level, Iraq does not recognize the state of Israel. In official positions, Israel is described not as a state but as the Zionist entity or occupier. The Iraqi state is well aware that even if it wanted to establish relations with Israel, the current popular mood would not allow it. Yet Israel removed Iraq from its list of enemy states in 2019.

Ahmed al-Sahaf, a spokesman for Iraq's Foreign Ministry, declined to comment on the matter to Al-Monitor. “We will not comment and we content ourselves with the ministry’s official statement,” he said.

Hussein al-Kaabi, the deputy speaker of the Iraqi parliament, requested that the ambassador be summoned. “These statements will not be part of our culture and our ideas," he said. "They are not part of the Iraqi state policy.”

Ronen Zeidel, an Israeli historian specializing in Iraqi history at Tel Aviv University, told Al-Monitor, "The statements expressed the ambassador's personal opinion, which I consider to be positive, although not consistent with the official position and policy of Iraq."

On the possibility that Iraqi Jews in Israel could contribute to establishing a relationship between Baghdad and Tel Aviv, Zeidel said, "Some of them could do so, but this is not enough. The ambassador's statements alone are not sufficient for the success of normalization. What Farid Yassin expressed is an opinion shared among the various liberal intellectuals in Iraq."

The State of Law coalition, led by former Prime Minister Nouri al-Maliki, called for the summoning and replacement of Ambassador Yassin.

At the grassroots level, Yassin’s statements failed to stir any reaction that paralleled the political reaction. Yet this does not mean the Iraqi public accepts normalization; the ambassador's statements merely occurred in tandem with other events that received wider coverage on Iraqi social media.

The current controversy over normalization dates back to January 2019, when local and international media reported on an alleged visit of an Iraqi delegation to Israel. Israeli journalist Edy Cohen published a list of these delegations. Yet these visits, if they did happen, would not be the first. Iraqi Ummah Party leader Mithal al-Alusi has talked openly about his visit to Israel.

Iraqi writer Sarmad al-Tai told Al-Monitor that the Iraqi ambassador in Washington was rational on the prospects of a relationship with Israel. He described some of the benefits that such a relationship could entail regarding the situation of Iraqi Jews and technological progress.

Rahman al-Jubouri, a senior researcher at the Center for Regional Studies at the American University in Sulaimaniyah, said, “It is important that we have a non-emotional diplomacy that gives Iraq a new improved image while at the same time preserving Iraqi interests and respecting the Iraqi public’s will and feelings. The Iraqi ambassador in Washington did not call for normalization and did not promote it. All that he talked about was the existence of factors that could favor normalization in the event Iraq wanted to normalize ties.”

Iraqi politician Ibrahim Sumaidaie told Al-Monitor, “The political uproar against the ambassador is a furor aimed to overthrow the Iraqi state. We all know that what connects us with Israel is limited to the Iraqi citizens who live there and have been deprived of their Iraqi nationality.”

In an article in Israeli Maariv newspaper, Jackie Khoji, an Israeli researcher in Arab affairs, wrote, “The statements of the Iraqi ambassador may be seen as an Iraqi trial balloon. Official relations are still farfetched. Yet they set a ground that can be built on in the future.”

Iraqi politicians’ reactions toward Ambassador Yassin were exaggerated. Yassin did not call for normalization and did not advise the Iraqi state to do so. He was speaking, instead, to the commonalities between the two countries if such a relationship were to be established.