Iraqi Jews in Israel see an opportunity for Iraq in the protest movement, a chance for a more tolerant Iraq to emerge from the crisis. 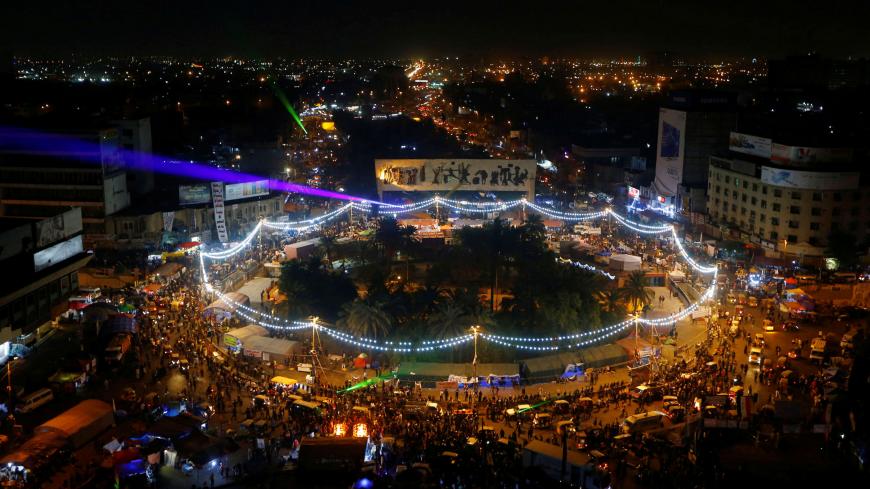 The protests in Iraq have drawn the attention of a minority group that emigrated decades ago. Although Iraq’s Jews could not return to Iraq for reasons beyond their control, they have showed wide support and interest in the protests.

Iraq’s Jewish emigrants in Israel have displayed varied feelings toward the protest movement. In addition to their amazement at seeing a national identity rising from the ashes of wars and conflict, they watched with heavy hearts as the protesters were brutally suppressed, with up to 600 people dead and more than 25,000 wounded, recalling the painful reasons they left their mother country in 1950-1951.

The current number of Iraqi Jewish in Israel is estimated at about 600,000. The Jewish population of Iraq was about 150,000 in the middle of last century. Now, there are very few of them left in Iraq, mostly very old people living under other religious identities.

Linda Menuhin Abdul Aziz, an activist and political analyst, sees herself present among the demonstrators in Tahrir Square in Baghdad. She bets that the protest movement will ultimately lead to a new political system that is representative of diversity, supportive of a civil representation of all of the components of the Iraqi people and will move the country forward.

Abdul Aziz, whose father was kidnapped in Baghdad shortly after she left the country in the early 1970s, expresses deep sadness at the deaths in the squares. She says, “The news on daily casualties at the protest squares is agonizing. It recalls the hanging of Jewish corpses in Tahrir Square itself, where innocent victims fell today as well.”

Lily Mindlawi Shor, director of external relations and events at the Babylonian Jewry Heritage Center in Tel Aviv, attributed the Jewish community’s considerable interest in the protest movement to its sense of belonging to Iraq as part of a mosaic identity. Although the suppression of the demonstrators brings back painful memories, “it created within them the very great hope that the situation will get better in their homeland where their ancestors contributed to the creation of an Iraqi historical identity for thousands of years, [an identity] that the Jews will undoubtedly remain a part of.” The Babylonian Jewry Heritage Center was initially set up to document and promote the long-lasting historical and cultural connection between Iraq’s Jews and the history and heritage of the country of their fathers and grandfathers.

Shor believes that Iraq forms a major part of her identity. She says, “How can I forget where I was born and raised? I still have great nostalgia for it.”

Ofra Bengio, a professor at the Moshe Dayan Center for Middle Eastern and African Studies, called the protests “a movement for the right cause.” Bengio questioned whether it could succeed in creating a new political reality anytime soon, yet she does see it as a sign of a broad societal change toward democracy.

Commenting on the interaction of Iraq’s Jewish community in Israel with the protest movement, Ronen Zeidel with the Moshe Dayan Center at Tel Aviv University, said, “Its aspirations represent a new model for the region upon which a liberal political reality can be built.” He added that it affects many more people than just Iraqis because it aims to end the Islamist project that has been so detrimental to the whole region.

Zeidel follows the protest movement and posts daily analysis on Facebook. The large number of Iraqis reacting to his posts, written in Hebrew, surprised him. His Iraqi followers use Google Translate to read them and then they post positive comments of support.

Interestingly, Iraqis are widely reacting on a Facebook page Israel's Ministry of Foreign Affairs created to encourage Israeli-Iraqi dialogue. An Iraqi activist also created a Facebook page for a "virtual embassy" of Iraq in Israel.

Jewish Iraqi researcher and author Khodr (David) Basson said that Iraq’s Jews were hopeful with the fall of the Baathist regime in 2003, which they perceived as the beginning of change, not only in Iraq but in the whole region. Yet such hopes faded with the sectarianism, civil war and terrorism that followed.

Nevertheless, he sees Iraq’s protest movement as a return to the right path. The participation of young people in the protests has showed the world that there is a national identity that can overcome the divides among Iraqis and stands against terrorism, corruption and militancy. Basoon said, “If the youth managed to bring down the deep state represented in the militias and corruption and replace it with a liberal, secular, civil system, Iraq will be able to rise again and take an active role in the comprehensive reform movement in the region as a whole.” Basoon supports the protest movement with writing and poetry as well as seminars for the Iraqi Jewish community in Israel.

These indicators show that Iraqi Jews in Israel still have a deep connection with their ancestor's homeland. Likewise, the protest movement in Iraq has built a bridge to other Iraqis living outside of the country, even those who left Iraq decades ago.