Iraqi citizens' sentiment may be softening toward Israel

Grass-roots support for improved communications seems to be growing in both Iraq and Israel, though officially they have no diplomatic relations. 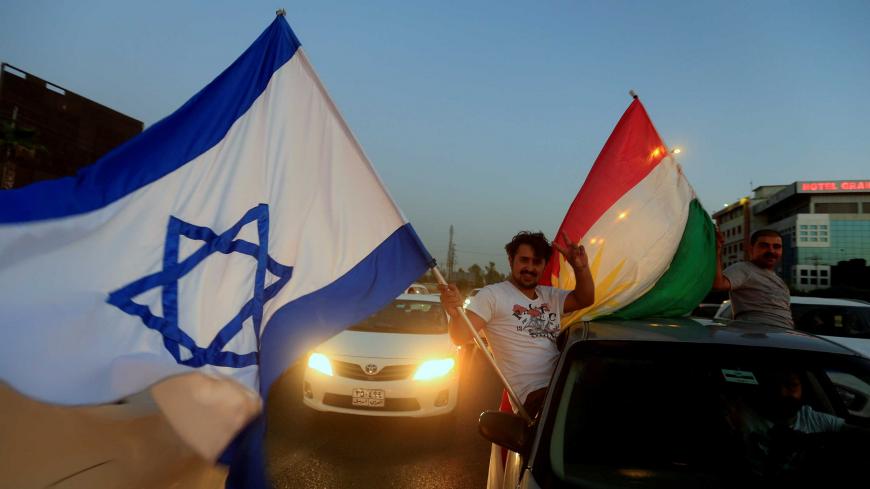 A Kurdish man holds Israeli and Kurdish flags on Sept. 22, 2017, during a rally to show support for the Sept. 25 independence referendum in Erbil, Iraq. - REUTERS/Alaa Al-Marjani

BAGHDAD — Some Iraqis are calling for closer relations with Israel, feeling a common bond of past persecution and a desire for peace and stability. Many people might find two factors cited in this change quite surprising: Iraqis' guilt, and some resentment of Palestinians.

"There is a dramatic shift that has changed [Iraqi] public opinion [toward Israel] as a result of the Palestinians' involvement in supporting the [late Iraqi] dictator Saddam Hussein and thus getting involved in terrorist operations," writer and political analyst Ali Mared al-Asadi told Al-Monitor recently by phone.

"Most Shiites in Iraq have a sense of guilt because they did not support the peaceful Jewish community with whom they lived for hundreds of years in peace and harmony in one homeland, but who were persecuted and displaced during the monarchy [1958-1963] and the Baathist regime [1968-2003] eras.”

Much of the fanaticism and hostility toward Israel appears to have declined in central and southern Baghdad, where the majority of people are Shiite.

On Sept. 9, Asadi wrote, “It is not in the interest of Shiites to antagonize Israel. Shiites and Jews ought to reach understandings based on common humanitarian grounds that guarantee peaceful coexistence in the Middle East.”

Asadi told Al-Monitor by phone, “If we put the influence of Iran and the remnants of the Baathist culture aside, Iraq would have no excuse to keep officially antagonizing Israel, especially since the majority of the Arab states, [even] the Palestinian state itself, hold relations with Tel Aviv.” Asadi apparently was referring to Arab states having contacts or other ties with Tel Aviv, because most Arab states do not formally recognize Israel..

Many Sunnis also seem to favor closer ties. Political analyst Maher Abed Jawdah told Al-Monitor, “Even Iraqi Sunnis are in tune with Sunnis in Saudi Arabia, Jordan and the Gulf countries in establishing good relations with Israel, mainly because they are driven by the same hate toward Iranian Shiites, who are very hostile against Israel.”

Much of the favorable sentiment in Iraq is coming from Kurds. Israeli Prime Minister Benjamin Netanyahu supports the Kurdish quest for an independent state in northern Iraq. This has pushed some Kurds to promote the idea of openness to Israel and to call for turning their relationship into an official one. Some media outlets even showed Kurdish cities raising the Israeli flag next to the Kurdish flag as they prepared for a Sept. 25 vote on a nonbinding independence referendum, which passed overwhelmingly.

As for Iraq’s official position, Maher said, “The Iraqi state rejects relations with Israel. The influential, Iran-backed Shiite factions in Iraq would not allow any friendlier official stance toward Israel.”

He added, "But the [Iraqi] Shiite public opinion is no longer as hostile to Israel as it was in the past, because of the participation of Arabs, especially Palestinians, in the bombing of Iraq,” he added.

Shuruq al-Abayji, an Iraqi parliamentarian, told Al-Monitor, “There are many individuals in Iraq calling for establishing relations with Israel, though they don't represent the official state position. However, Israel is seeking to galvanize these individual views through special agendas.”

Mithal al-Alusi, a former Iraqi parliamentarian and longtime outspoken advocate of normalizing ties with Israel, sees communication as the key to achieving that goal.

“The need to communicate and have dialogue with everyone at the level of states, parties and individuals, including Israel, is the way to solve problems in the region and achieve a secure future for all peoples,” he told Al-Monitor. "The current communications revolution means everyone has become able to express their opinion freely, regardless of the official stance of a government or a state. Many positions and stances have [become] pro-Israel.”

Linda Menuhin, a Jewish writer and former journalist born in Baghdad and based in Israel, told Al-Monitor by phone of her experience with the issue. “Many of the Iraqis I am in touch with encourage good relations with Israel. Many of them also want to visit Israel and even settle there.”

Aziz, who studied public administration in the United States, added, “I think relations between Israel and Iraq will flourish in the future, and I hope by then I will be the first Israeli ambassador to Iraq."