Rouhani backpedals on suggestion of talks with Trump

The Iranian president has conditioned any meeting with his US counterpart on sanctions removal, a clear shift from an earlier statement that he was prepared for any meeting that might help his country. 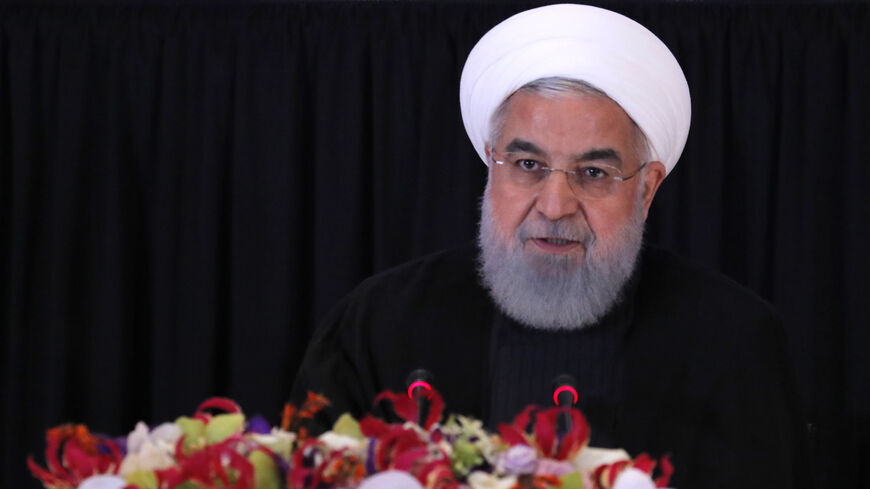 Iran's President Hassan Rouhani speaks at a news conference on the sidelines of the 73rd session of the United Nations General Assembly at UN headquarters in New York, Sept. 26, 2018. - REUTERS/Brendan Mcdermid

"If someone is merely seeking a photo opportunity with Hassan Rouhani, that is not possible, unless they lift all the unjust sanctions," said the Iranian president in reference to speculation about a possible meeting with his American counterpart Donald Trump.

Rouhani noted that as for Iran-US ties, "the key to positive developments" is in Washington's hands. "Those who have waged economic terrorism against the Islamic Republic … need to repent and reassume their obligations," he added.

Rouhani's Aug. 27 comments were a reversal of his softening a day earlier when he expressed readiness to sit down with anyone if a meeting would benefit his country. "If I know that meeting with a certain person will resolve my country's problems and makes Iran a more developed country, I will not shy away from it, because what counts most is my country's national interests." In the same speech, Rouhani admitted that Iran is experiencing hard economic times and asserting that the country will continue to seize all diplomatic opportunities.

Rouhani's speech was taken as a response to French mediation meant to end the Iran-US impasse and salvage the fragile nuclear accord. The French initiative demands that the United States ease its "maximum pressure" campaign in return for Iran's resumption of full adherence to the deal. On the sidelines of the G-7 summit in Biarritz, French President Emanuel Macron expressed hope that in the coming weeks, "we can manage to see a summit between President Rouhani and President Trump."

Unsurprisingly, the president's words unleashed a collective barrage of furious attacks from Iran's hard-liners. Javan, run by the Islamic Revolutionary Guard Corps (IRGC), quoted him in a biting editorial, warning, "Iran will not become a 'more developed country' with photo diplomacy, Mr. Rouhani!"

Similarly, Kayhan, which is closely linked to the supreme leader's office, told Rouhani, "What makes Iran a 'more developed country' is hard work at home rather than negotiating with this and that leader." Kayhan reminded the president that months of talks with the previous US administration culminated in a nuclear deal that produced no tangible results for Iran. "Unfortunately, the government has fallen for the treacherous and humiliating Trump-Macron plot. It should withdraw from the nuclear deal and end the one-sided compliance to its commitments."

While Iran's Reformist camp has been supporting the French initiative, the more powerful conservatives are highly cynical. France, according to the pro-IRGC Fars News, is an "old bad cop" now reemerging as a "stubborn mediator."

Under the norms and rules dominating Iranian politics, it is the Supreme Leader Ayatollah Ali Khamenei who will issue the final verdict over whether Rouhani could meet with his US counterpart. Khamenei has yet to officially react to the French proposal. But his latest stances have been vigorously opposed to any rapprochement with the current US administration.

Iran's political elites are already united in the belief that negotiation under pressure will bring Iran nothing but humiliation. Some also maintain that US pressure has done all it can and Iran should refrain from offering unnecessary concessions. This view was echoed in an editorial by conservative Khorasan that argues that Iran's economy has already survived the worst and is no longer vulnerable to political developments, as seen in the case of the forex market, which despite heightening tensions is significantly rebounding.