Intel: Why military confrontation between Turkey, Kurds in Syria might be good news for Russia 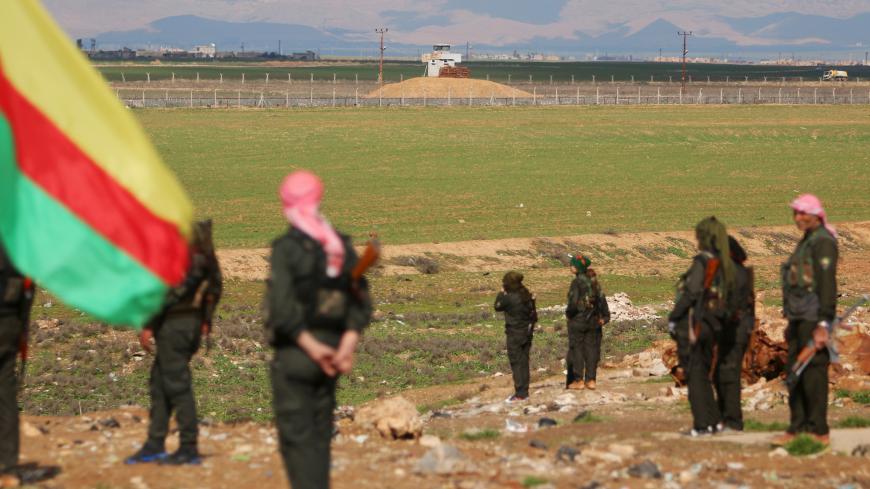 Kurdish members of the Self-Defense Forces stand near the Syrian-Turkish border in the Syrian city of al-Derbasiyah during a protest against the operations launched in Turkey by government security forces against the Kurds, February 9, 2016. - REUTERS/Rodi Said

Turkish President Recep Tayyip Erdogan’s repeated threats to attack Kurdish forces in northeast Syria depend on Ankara’s ability to meet certain conditions if they’re to become reality. Several of these, particularly air support for the ground operation and the use of pro-Turkish Syrian opposition groups, are possible only through respective nods from Washington and Moscow. This comes as Washington and Ankara continue negotiations on a safe zone in northern Syria — talks that have made “important progress” in recent days, according to US Secretary of State Mike Pompeo.

Why it matters: Russia believes that both US support for the Kurds and Turkish support for Syrian opposition groups contribute to continued foreign interference in Syria and threaten the unity of the country. Moscow’s official position is that neither Washington nor Ankara have a legal basis for their military presence in Syria. Russia also accuses both parties of contributing to the looting of the country’s resources to buy the loyalty of local tribes in the Euphrates area. Nevertheless, Russia has been making deals with Turkey to help Ankara prepare for a potential assault in the northeast of Syria, including a recent — and tenuous — agreement to impose a temporary cease-fire in Idlib that would help Turkey free some Syrian opposition forces for their deployment to the Euphrates area.

The rationale seems to be that the start of Turkish military operation may in fact benefit Moscow. The calculation is that once Turkey launches its assault and the Americans are unable to provide a cover for them, the Kurds may turn to Russia, empowering Moscow to try to create the conditions for yet another attempt at a rapprochement between the Kurds and Bashar al-Assad’s government. Until now, Russia sees the Kurds as having adopted “maximalist positions” in their dealings with the Syrian government. “Of course, we’d like to avoid casualties. But the Turkish operation could, perhaps, help us settle some issues,” a senior Russian diplomat told Al-Monitor on the basis of anonymity. “If the Turks attack the Kurds, this may make the latter more flexible in terms of reaching an agreement with Damascus.”

Bye-bye, USA: Russian Foreign Minister Sergey Lavrov voiced Moscow's view of the desired outcome shortly after US President Donald Trump announced the withdrawal of US forces from Syria last December. “The weapons, the territories and the military facilities that are owned by the [United States] in Syria should be passed over under the control of the Syrian authorities, Syrian military and the Syrian administrative structures, with understanding that the Kurds residing in their traditional areas should be provided with all necessary [living and civic] conditions,” Lavrov said at the time. In other words, Russia is willing to guarantee Kurdish rights in exchange for the US departure and Assad reclaiming full control of Syria — a position based on the presumption that neither party trusts the Americans.

What’s next: As Russia seeks to expand its cooperation with Turkey beyond Syria, Moscow is unlikely to deter Ankara from a new offensive against the Kurds should Turkey decide to take action. But the Russians eye a subsequent mediation role between the Kurds and Damascus should hostilities resume. Two key unknowns remain, however: First, how would the United States see its own role on the ground in case of a Turkish incursion? Second, can the Kurds and Damascus break with precedent and demonstrate that they can get over their disagreements and strike a deal?

Know more: Read Ayla Jean Yackley’s piece on how Ankara negotiated the buffer zone in Syria with the United States.