Whether Ankara will stage an operation east of Euphrates depends on diplomatic efforts with Washington and Moscow. 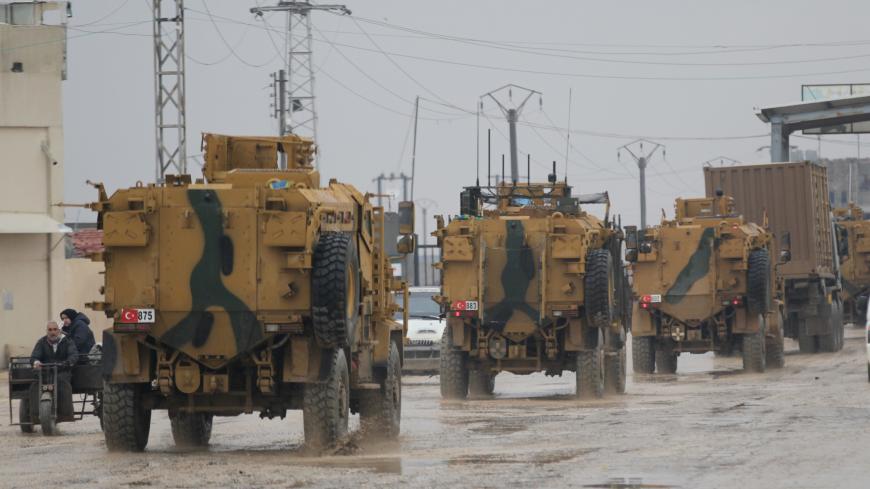 Turkish military vehicles move at the Bab al-Salam border crossing between the Syrian town of Azaz and the Turkish town of Kilis, in Syria, Jan. 1, 2019. - REUTERS/Khalil Ashawi

It was 50 days ago when Turkish President Erdogan warned of an imminent military operation east of the Euphrates in a matter of days.

Turkish forces continue to mass in the region but there is no a sense of an imminent operation. As I emphasized in my Jan. 2 article, there is no perceptible reconnaissance, surveillance and target-acquisition activities by the Turkish air force over a potential area of operations. For Ankara, close air support for ground forces is essential. Such preparations are usually the most significant signals of an imminent operation. So far there is none of that.

In the latest summit between Presidents Recep Tayyip Erdogan and Vladimir Putin on Jan. 23 in Moscow, which Turkey had high hopes for, it appears Erdogan was unable to get what he desired. It was obvious that Moscow did not outright give support to Turkey’s proposals for a safe zone in northeast Syria nor to Turkey's free use of Syrian airspace.

At a joint press conference in Moscow, when asked how Russia evaluates the proposed safe zone, Putin said, “The treaty between Syria and Turkey of the year 1998 is still valid. And it deals, in particular, with the fight against terrorism. Today we have been discussing this issue quite thoroughly, fully and actively.”

In the Moscow meeting, Putin’s mention of a 1998 bilateral anti-terror protocol between Turkey and Syria has been interpreted by Ankara as a green light given by Moscow to a Turkish military operation into Syria's northeast. A day after the Moscow meeting, Turkish Foreign Minister Mevlut Cavusoglu told private broadcaster A Haber, “We think he [Putin] referred to this [protocol] implying that Turkey can intervene in [Syria]. And this is positive for us.”

Yet there is another interpretation of Putin’s reference to the Adana protocol. Putin is likely emphasizing the urgent need for normalization between Ankara and Damascus when tackling the problem of the Kurdistan Workers Party-affiliated People's Protection Units (YPG) in northeastern Syria. Furthermore, more cooperation and coordination between Ankara and the Assad regime is a must for Moscow to settle things down in and around Idlib. One may simply suggest that Erdogan went to Moscow with high expectations about the safe zone and that he flew back to Ankara with empty hands but with two tasks: first, to normalize ties with Assad regime as soon as possible, and second, to prioritize Idlib instead of northeast Syria.

The road map with Washington on a possible safe zone did not become clearer with US national security adviser John Bolton’s visit to Ankara at the beginning of January nor after US Sen. Lindsey Graham’s Jan. 19 Ankara visit.

Sources in Ankara told Al-Monitor that although there is an understanding between Ankara and Washington to form a safe zone that will be 35 to 40 kilometers (20 to 30 miles) deep in Syria, there are still unsolved issues.

These sources, who did not want to be identified, said Washington is prepared to agree to the withdrawal of the Kurdish YPG from the area between the Turkish border and Syria’s east-west M-4 highway. It also appears that the United States will not oppose patrolling by Ankara-backed Free Syrian Army groups and some Sunni tribal units in areas where Kurds are not in the majority. But Washington doesn’t envisage the safe zone as an area where Turkish soldiers will operate independently on their own. Washington wishes to have French and British soldiers operate jointly with the Turks in joint patrols. Also, Washington and Ankara can’t fully agree on whether Turkish troops can independently patrol in Kurdish-majority towns such as Kobani, Qamishli, Al Malikiyah and Amuda. The United States doesn’t approve of the idea of patrols by Turkish troops in town centers.

Moreover, the United States has not yet decided to hand over to Turkey 14 bases it had set up in northern Syria .

Has the United States come up with a proposal that will persuade Ankara and eliminate its security concerns? Ankara is hearing reports that Washington is seriously considering the formation of a security force made up militants allied with Iraq's Barzani family; these forces are linked to the Kurdistan Democratic Party (KDP) and the Kurdish National Council. This might be accepted by Ankara because of Turkish opposition to the YPG. The Rojava Peshmerga, allied with the KDP and the council, are in northern Iraq for the time being.

The Rojava Peshmerga force, formed in 2012 and trained both by NATO and the anti-IS coalition, now fields 6,000 fighters.

Kurdish National Council officials have already been saying that Rojava Peshmerga would move west across the border and may play a role to initiate a dialogue between the PYD and Turkey.

Ankara and Washington have agreed on transferring Rojava peshmerga to northeast Syria but they still have not decided on the missions and area of operations for these fighters.

Another issue subject to negotiations between the United States and Turkey is the local governance that has gained strength in northern Syria under US auspices and political post-conflict reconstruction. US army defines its operation in post-Islamic State northeast Syria as “Kurdish governance and stabilization efforts.”

This is a vast, comprehensive capacity building effort covering local governance, education, taxation, health care, infrastructure, agriculture and industry. The United States fears that Turkey, by settling in the area, may eradicate all these efforts. The United States is seriously worried that the political, security and economic void that might be left following the US pullout from the area might be filled by pro-Iran armed groups.

Finally, a most serious issue of contention between Ankara and Washington is the establishment of a no-fly zone in some critical areas of northeast Syria. Ankara, because of its experience in northern Iraq, is against this proposal, while Washington is seriously working on it.

What is clear is that the possibility of a Turkish military operation east of the Euphrates is not dependent only on Turkey’s military capacity on the ground but also on the diplomatic efforts it has to exert to persuade both Washington and Moscow.