Can this documentary bring Iran its third Oscar?

The documentary "Finding Farideh" has been chosen as Iran's submission in the international feature film category to the Academy Awards, but some argue that the movie does not fit the criteria. 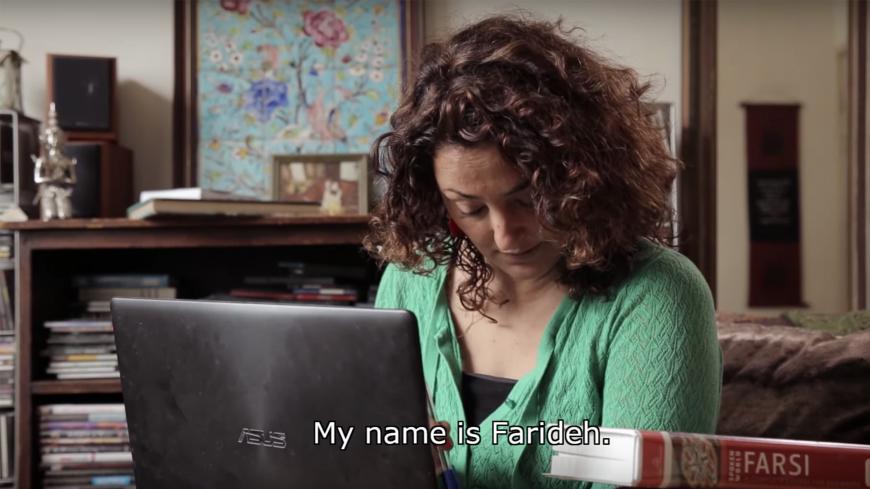 A scene from "Finding Farideh," which Iran has chosen to submit for the Oscars' international feature film award. Posted July 23, 2019. - YouTube/Journeyman Pictures

The selection of a documentary instead of a feature film to represent Iran at the Oscars has stirred negative reactions in some Iranian cultural circles, with the choice of “Finding Farideh” being likened to a coup.

Every year, the Farabi Cinema Foundation, which is affiliated to the Culture Ministry, forms a committee of eight to select the country’s nominee for the Academy Awards. Iran has nominated 25 films for the foreign film Oscar and walked off with the statuette twice — with “A Separation” in 2012 and “The Salesman” in 2017.

But this is the first time that Iran has chosen to submit a documentary for what is now called the international feature film award - the new name for "the foreign language film award" since April. The submission criteria allow animated or documentary feature films to be submitted as long as they are feature-length motion pictures produced outside the United States with a predominantly non-English dialogue track. The Oscars also have another award for short documentaries.

Raed Farid Zadeh, the secretary and spokesperson for the committee, said in a statement Aug. 18 that the committee first selected a shortlist of 10 films out of an initial 70, then debated the final three - “Castle of Dreams,” “6.5 Per Meter” and “Finding Farideh.”

The feature-length documentary by Azadeh Moussavi and Kourosh Ataee narrates the story of Farideh, a woman who was abandoned in the holy shrine of Imam Reza — the eighth Shiite imam — by her parents 40 years ago. She was adopted by a Dutch couple, but later returned to Iran to find her biological parents.

Right after the announcement, Moussavi released a statement on Instagram that both directors were jubilant. “This is an important and historic event for Iranian documentary cinema,” she said, “We hope that this selection will be a great step to make Iran’s documentary cinema even more famous in the world.… We will do our best to be the competent representatives of Iran’s cinema.”

But others were disappointed, particularly the directors and fans of “6.5 Per Meter,” a social drama whose plot revolves around a drug dealer. The film won the audience award at Iran’s Fajr International Film Festival in February.

Navid Mohammadzadeh, a leading actor in the film, and Saeed Roustayi, its director, protested the decision with statements to the local media, calling it a “coup.” Both claimed that there had been irregularities, saying that the winner was announced one month earlier than usual.

In response, the selection committee's spokesperson told the semi-official ISNA news agency Aug. 18 that the process had been sped up this year because of changes in the Academy Awards' procedures. Zadeh said that in previous years the countries were given more time to select their nominee, but this year, they had a shorter deadline.

The controversy was further heightened by an Aug. 19 report on the Iranian website Film News that there had been serious disagreements among the members of the selection committee. The report said that the supporters of award-winning director Reza Mirkarimi’s “Castle of Dreams” and “6.5 Per Meter” in the committee were in severe disagreement and that in the end, committee members backing “6.5 Per Meter” decided to vote for “Finding Farideh” in order to prevent “Castle of Dreams,” a family drama, from being selected.

Hamed Behdad, the leading actor in “Castle of Dreams,” published a short statement on his Instagram page demanding that the Cinema Organization of Iran, which has more political power than Farabi, to release details of the discussions of the selection committee.

On Aug. 19, in a tweet believed to be a response to Behdad’s request, Cinema Organization of Iran Director Hossein Entezami praised “transparency in culture,” saying, “Some people oppose transparency ... but they ignore the positive impact of media surveillance.”

Despite Entezami's backing of “transparency,” details of the discussions in the selection committee have not been released.

Adding to the controversy, Bahman Ghobadi, an acclaimed film director, slammed the selection committee for its lack of “awareness,” saying Aug. 22 that the international feature film award is a competition for feature films, not documentaries, and that Iran’s nominee would be left out of the running.

The I Cinema news website, however, argued that under Academy Awards rules, “Finding Farideh” and other documentaries can be submitted as long as they are feature-length.

Film critic Arameh Etemadi told Al-Monitor that “Finding Farideh” indeed meets the Oscars' criteria. She also said the real story depicted might help the film stand apart from the others, “There are lots of action/crime movies, and the world isn’t exactly clamoring to see still another action film from Iran."

The eyes are now on the shortlist for international feature film that is expected to be released in December. If "Finding Feridah" is not on it, the Ministry of Culture and the selection committee can expect to come under more heavy attacks and criticism.