As Egypt’s parliament prepares to vote on a bill to establish a new Senate, some say it would be beneficial for the country, while others believe it would add more financial burdens on the state. 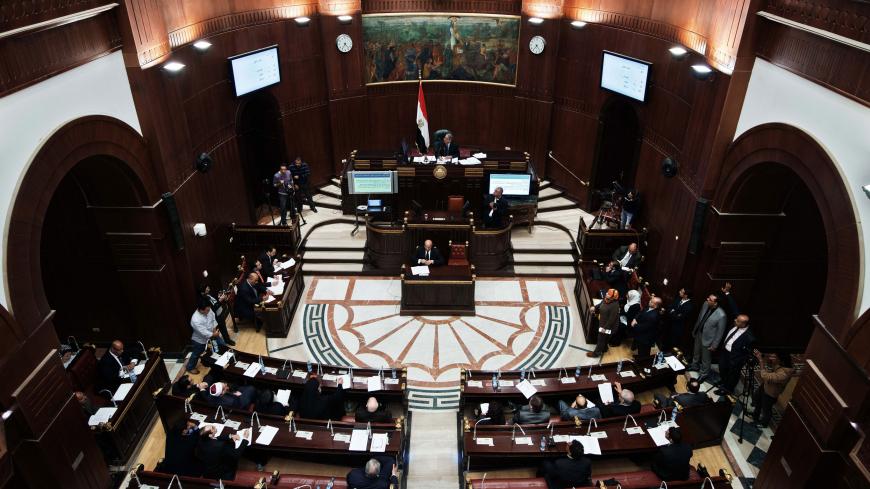 Members of the Egyptian constitutional panel vote on a new constitution at the Shura Council in downtown Cairo, Nov. 30, 2013. - GIANLUIGI GUERCIA/AFP/Getty Images

Egypt is preparing to pass a law on the establishment of a new Senate as a second chamber of parliament, amid a debate over the purpose of its return mentioned in the 2013 constitution that was drafted following the ousting of President Mohammed Morsi.

On July 12, the Egyptian government submitted to the House of Deputies (parliament) the Senate bill, which was referred by Speaker Ali Abdel Aal to the Legislative and Constitutional Committee for discussion and preparation of a report for presentation to the plenary.

The House of Deputies was expected to pass the law at the end of its fourth session of convening on July 15. But the nongovernmental organizations law as well as the Insurance and Pensions Act were given priority, and so it is expected that the bill will be approved by the parliament in its October session.

Under the 2014 amended constitution, the Senate is concerned with examining and proposing what it sees to be boosting the pillars of democracy, promoting social peace, the basic elements of society and its supreme values, rights, freedoms and public duties, as well as deepening the democratic system.

The opinion of the Senate is taken when proposals are made to amend one or more articles of the constitution, the draft General Plan for Social and Economic Development (an annual plan prepared by the government for the country’s social and economic issues), treaties related to alliance and reconciliation with other countries and all treaties related to sovereignty.

The Egyptian authorities appear to want to complete the Senate elections before the end of this year or at the latest at the beginning of next year, according to sources.

The majority of the members of the 50th Committee, which wrote the 2013 constitution, considered the Shura Council as a means used by the former ruling regimes to provide political favors to loyalists.

According to the amended constitution, the Senate is to be composed of a number of members determined by the law of not less than 180 members. Two-thirds of its members are to be elected by public voting while the president is to appoint the remaining third, with a term of five years. The potential members are businessmen, legal experts, members of political parties, representatives of the Coptic Orthodox Church and Al-Azhar. According to the constitution, members of the Senate should be at least 35 years old.

Members of parliament have praised the initiation of the two-chamber system as it will strengthen and promote democratic practice, because it diversifies the political representation of different groups of society and achieves equality between citizens demographically and geographically.

“The new Senate will include a wide range of veteran experts in various fields, businessmen and intellectuals who will represent a think tank that is concerned with research and policymaking decisions before submitting them to the government and the House of Deputies,” Mohamed Abu Hamed, a member of parliament, told Al-Monitor.

Speaking during a national youth conference on July 31, President Abdel Fattah al-Sisi said the Senate would bring together considerable expertise in various fields to help the House of Deputies and the government make appropriate decisions.

Sisi ruled out the participation of the young people in the Senate, saying that young people's participation in the House of Deputies and also in the upcoming local elections due by the end of this year will be large.

Abu Hamed said that there is a possibility for the new Senate to revive partisan life after the stalemate that hit it over the past years, referring to members of opposition parties who have recently disappeared, and to benefit from the revolutionary movements that emerged after the two revolutions of Jan. 25, 2011, and June 30, 2013. “All these political movements and groupings can be used to serve the country so as not to remain just protest movements,” he said.

Abu Hamed also discarded comments claiming the new Senate would add a financial burden to the state, highlighting that when the new Senate law goes into effect, the number of members of the House of Deputies would be decreased.

“Now the number of members of parliament stands at 596 and when the new Senate law goes into effect this number would be divided among the two chambers,” he noted. “That would be the same number and no extra expenses would be needed.”

Businessmen and bankers are expected to take part in great numbers in the new Senate as they did before in the previous Shura Council.

Ahmed el-Shami, an economist and professor of feasibility studies at Ain Shams University, told Al-Monitor it would be tremendously important for businessmen and economists to take part in various activities — whether industry or financial institutions — in the new Senate in order to give reliable insights into economic decisions.

“That would definitely add to the draft laws pertaining to the economy and would maximize their benefits as they would be looked into by experts and professionals working in this field,” he said.