How many houses does Egypt's legislature need?

Proposals to revive Egypt’s Shura Council are stirring controversy over whether the body would help or hinder the legislative process. 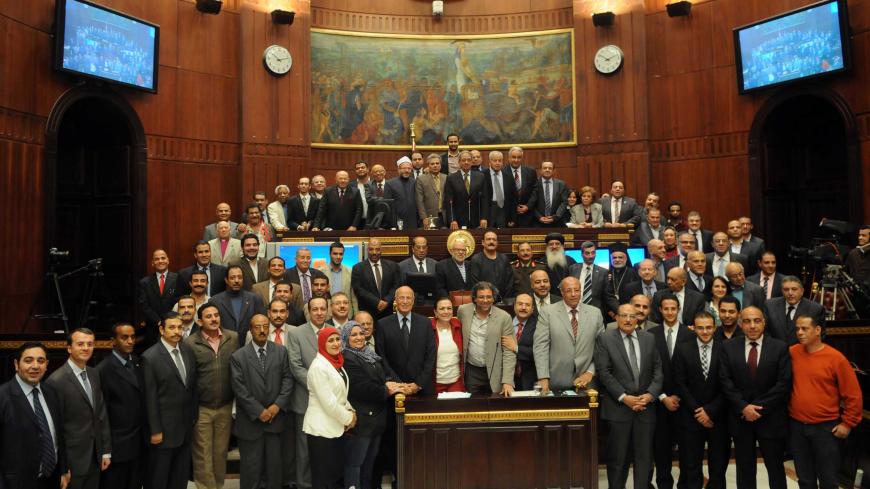 Members of the assembly writing Egypt's new constitution pose for a group photo after finishing their vote at the Shura Council in Cairo, Egypt, Dec. 1, 2013. - REUTERS/Stringer

CAIRO — Some members of Egypt's parliament are lobbying — once again — for the return to a bicameral legislature by reinstating the Shura Council, which was the structure under former President Hosni Mubarak.

The Shura Council's experts were tasked with discussing draft laws and the state general budget. After having been dissolved by interim President Adly Mansour in 2013, the body was permanently abolished when a committee drafting the 2014 Egyptian Constitution determined the number of parliament members was becoming a financial burden on the state. Committee members also said the bureaucracy and red tape involved in continuing to have two houses could hinder the promulgation of laws.

However, some parliament members now believe the Shura Council actually helped improve the process by which bills were approved, allowing them to be thoroughly considered.

Hamada Gulab, a member of parliament's Constitutional and Legislation Affairs Committee, has called for reinstating the Shura Council. Gulab told Al-Monitor that bringing back the council wouldn't cost the Egyptian state anything beyond spending on elections for council members. He pointed out that all the administrative staffers who were working for the council when it was dissolved were moved over to become employees of parliament, where he said they aren't needed.

However, Gulab didn't mention the costs of paying the salaries, transportation fees and insurance costs of the Shura Council members to be elected.

He explained that the Shura Council could be made up of a select number of experts from all fields. “Our need for such a body became apparent when we found ourselves spending a lot of time trying to understand and evaluate issues we are not expert in, such as aspects of law and matters relating to education, health, transportation and others. The council [would] act as a key partner in the discussion, voting and amendment of draft laws," freeing up parliament members to oversee the government.

Gulab’s request isn't the first of its kind. In September, Ahmed Hilmi al-Sharif, deputy of the Constitutional and Legislation Affairs Committee, had also submitted a proposal to bring back the Shura Council, citing the same reasons and objectives as Gulab. His proposal wasn't discussed because of parliament’s busy schedule at the time.

But the separate proposals by Gulab and Sharif have sparked a debate among parliamentarians and other politicians.

Alaa Abed, head of parliament's Human Rights Committee, told Al-Monitor he prefers a second chamber in the form of a senate. He noted that many countries have two houses, or chambers, with the first comprising parliament members and the other senators or lords. “A senate must consist of experts who contribute to legislative functions,” he added, noting the great pressure on parliament now to issue and approve myriad laws.

“The 50-member committee tasked with drafting the 2014 constitution did not anticipate the scale of the problems that would confront Egyptian society and that have necessitated a legislative reform of dozens of laws,” Abed said, adding, “I think [parliament members] have borne enough of these burdens. They have achieved a record rate in issuing laws from 2016 up until now, leading to a paralysis in their role of monitoring the government’s performance.”

Indeed, since the current parliament was seated in January 2016, until January 2018 it enacted some 700 pieces of legislation in a bid to modernize Egypt’s legal system. Among these are the health insurance law and the unified investment law. It's also amended the anti-terrorism law and the code of criminal proceedings and has made dozens of amendments to the penal code.

Hassan Nafaa, a political science professor at Cairo University, told Al-Monitor that forming a two-chamber parliament is primarily a technical issue. However, "discussion about reviving the Shura Council is a political luxury Egypt can't tolerate in light of the current [political and economic] conditions," he said.

“The [volume] of laws passed doesn't reflect the real activity" of parliament members, Nafaa continued, adding, “Rather, it's a dangerous indicator of the absence of a full opposition in the current parliament, making it easier for the majority, even unorganized, to pass laws quickly and without any real discussion with the opposition. Forming any other council, whether the Shura or a senate, will just be an experiment in cloning more of the same. What we need is to strengthen political parties to create real opposition both inside and outside parliament.”

Rami Mohsen, director of the National Center for Parliamentary Consultancy, pointed to a dearth of professionalism among some political parties that led to multiple splits. He told Al-Monitor, “The experience of electing a Shura Council would not yield any better or stronger partisan experiences. To some extent, the country would bear the burden of this council through the salaries of members, … election expenses and the necessity of amending the 2014 constitution.”

Agreeing with Mohsen, member of parliament's Local Administration Committee Abdul Hamid Kamal said the public will reject the call to reinstate the Shura Council. He told Al-Monitor that many Egyptians are already critical of parliament members' expenses, which reached 1.1 billion Egyptian pounds (around $61.6 million) for fiscal year 2017-2018. That amount includes members' salaries, transportation fees and insurance.

Hamid Kamal asked, “How will Egyptians see the allocation of new expenses for the Shura Council?” He said the state won't be able to bear any new financial burdens. “Any new funding that could be spent on the Shura Council is already being exhausted by the parliament,” he added.

The idea of reinstating the Shura Council may still be premature, said Khaled Hanafi, a member of parliament's Constitutional and Legislation Affairs Committee. He told Al-Monitor, “The matter will take time to debate and needs a constitutional amendment."

Such an amendment would require the approval of two-thirds of parliament and a popular referendum, in accordance with the constitution. “The process of persuading such a number [of members], as well as carrying out the referendum, will be lengthy,” Hanafi concluded.