Egypt flips its wig over cost of imported cosmetics

Economists say Egypt's trade balance needs to be reduced, and some see one way of doing this by reducing imports of cosmetics and wigs. 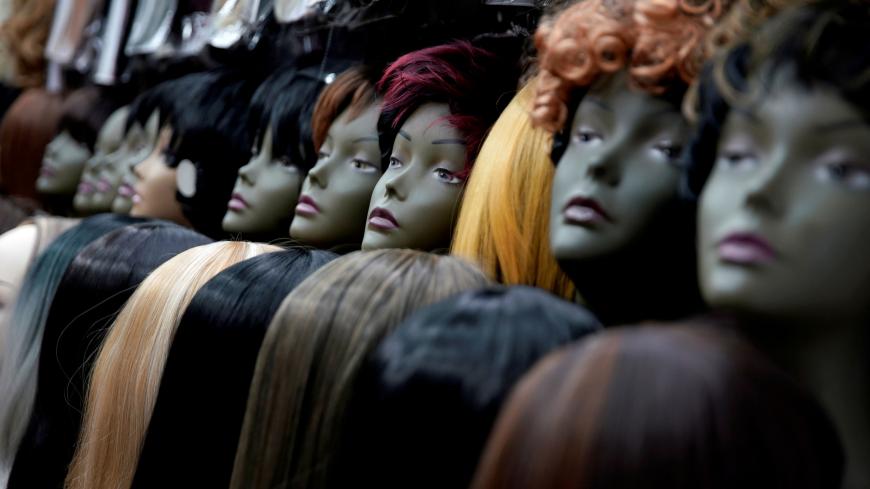 Mannequins with wigs are seen in a stall at the Yiwu Wholesale Market in Yiwu, Zhejiang province, China, May 9, 2019. - REUTERS/Aly Song

CAIRO — Egyptian economic observers have agreed that it is important for Egypt to start reducing the trade deficit by increasing exports and reducing imports.

Ahmed Shamseddine, head of research department at Egypt’s EFG-Hermes Bank, said in a press statement July 27 that the bank’s research shows that achieving the highest rates of economic growth and raising the standard of living requires reducing the trade deficit by half.

In early July 2019, CAPMAS estimated Egypt’s imports of wigs, mostly from China, to be worth 3 million Egyptian pounds (about $181,000), or about 7.5% of Egypt’s total imports from China during the first quarter of 2019. Analysts, however, believe that the real volume of Egypt’s imports is far greater than the CAPMAS figure, especially since the total trade of wigs worldwide exceeds $80 billion annually.

Mahmoud Sirag, assistant economics professor at al-Arish University, told Al-Monitor, “This is not about the wig industry in particular but about the media campaigns needed to raise awareness among Egyptian women about the consumption of luxury goods and the need to reduce the importation of such goods through the imposition of higher customs duties or dumping fees. This merchandise, such as wigs, makeup products, clothes and perfumes weigh heavily on the Egyptian economy and cause part of the deficit in the non-oil trade balance in the country.”

Sirag said, “According to a study conducted by students of the Department of Economics at the Faculty of Commerce at Al-Arish University, the cost of importing such goods stands at 5.46 billion pounds [$330 million], 0.74% of the total deficit of the non-oil trade balance of about $44.7 billion. Although this figure appears to be small in comparison with the total trade deficit, the sales of a large sample of traders of these goods who were the targeted population of this study show that 3.5 times that amount [$1.155 billion] of goods is smuggled into the Egyptian market without any official records. Importing such goods costs millions of dollars that the Egyptian economy is wasting.”

Maryam al-Wakil, a manager at a pharmaceutical company, told Al-Monitor, “The Egyptian government and economic pundits exaggerate the impact of some imported goods for women on the Egyptian trade balance.”

“According to my readings of newspapers, these imports do not eat up a huge budget of the hard currency. Perhaps the crisis lies in the fact that Egypt has the ability to produce many of these goods locally, including cosmetics, wigs and clothes. The state ought to encourage local alternatives, instead of pressuring citizens to stop importing them, as this step would not reboost the Egyptian economy,” she added.

Safinaz Mansour, owner of a hairdressing salon in Giza, concurred with Wakil, telling Al-Monitor, “The bill of imported wigs and cosmetics, for instance, had fallen significantly in comparison with earlier times when Egypt imported the products from the US and Europe.”

“Egypt is currently importing many of these goods, namely wigs from China, at modest prices compared with the prices of the US and Europe, taking into consideration that these industries in Egypt are facing many difficulties,” she added.

“Many clerics forbid the industry the manufacturing of wigs and cosmetics because wigs are basically made from donated natural hair, which is seen as part of organ trade from a religious point of view,” Mansour said.

She added that some sheikhs also prohibit the use of makeup and cosmetics as they are considered to be a tool used by women to conceal their real appearance.

Wael al-Nahas, a financial and economic adviser to several investment institutions in Egypt, told Al-Monitor that reducing the imports of luxury goods would contribute to reducing the trade balance deficit, but not so much in terms of boosting the Egyptian pound and achieving economic recovery. He said he believes the best option would be for the state to conduct an extensive study about imported goods and which ones could be locally made.

Nahas added that the state should encourage small manufacturers or international companies to manufacture these products locally and support them, and to benefit from the Egyptian commercial representation offices for providing export opportunities. This could reduce imports and achieve an export surplus at the same time, boosting the trade balance. Nahas said imposing high tariffs or dumping fees would be contrary to the General Agreement on Tariffs and Trade, which Egypt joined in 1970.

Hani Abu Raya, manager at a beauty center in Cairo, told Al-Monitor that some of the products and cosmetics that are imported become much in demand in Egypt depending on fashion trends, which usually are launched abroad before Egyptian artists on TV start following them and then the viewers copy them.

“This includes the wig that Dina al-Sharabini used in its 2019 Ramadan show,” Abu Raya said.