A former homeless survivor of rape and other violence not only got herself off the streets but established a foundation to help others do the same. 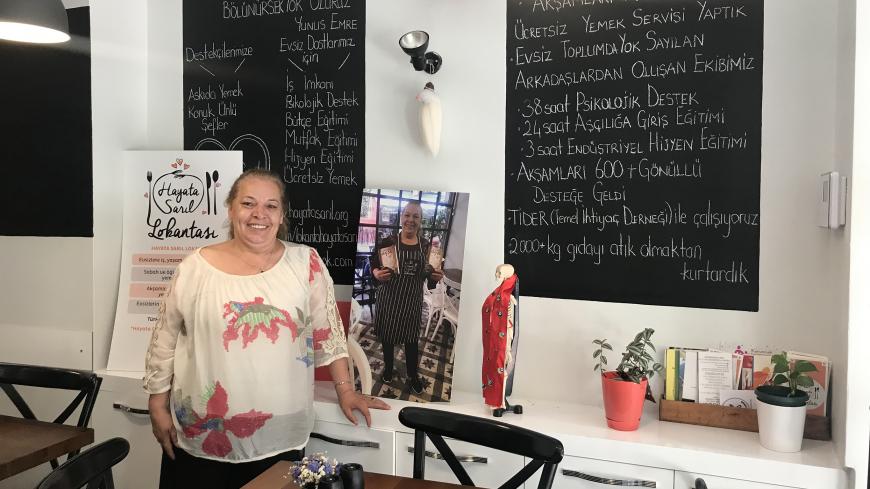 Ayse Tukrukcu, the owner of Hayata Saril, is seen in her restaurant that provides meals and other services to homeless people in Istanbul. - Riada Asimovic Akyol

In a small side street off Istanbul’s Taksim Square, Ayse Tukrukcu welcomes patrons to her cute and cozy restaurant. In the bustling Beyoglu area, there is a plethora of spaces offering diverse food but the mission of Hayata Saril (“Embrace Life”) stands out. The restaurant serves regular meals to customers from 11:00 a.m. to 6:00 p.m., but later the meals are served to “homeless friends.” There is no official registry, but estimates suggest that there are around 7,000 of them in Istanbul. Tukrukcu welcomes them with open arms. More importantly, she employs them — without asking too many questions.

“We don’t have the right to judge the people who work here. Your past is behind these doors, we say to them. We learn about them as much as they share,” she told Al-Monitor.

Besides offering a chance for work, the Hayata Saril community shares information about other job opportunities. It also offers psychological support, financial training and hygiene education. All of it is part of Tukrukcu's vision, which is to not only feed the homeless, but also to try and help put their lives in order. Her restaurant is part of a foundation of the same name and represents a thriving social responsibility project, inspired by the owner’s own life story, now the subject of a popular local TEDx talk, a book and a documentary.

Tukrukcu is a survivor of domestic abuse and rape by her uncle when she was nine years old. She left home as a teenager, but ended up being forced into prostitution in 1993 in the southern town of Mersin by her second husband, and had to do sex work for three years. She was sold to seven brothels around Turkey.

“It wasn't work, it was slavery 365 days a year,” she told in an intimate conversation with Al-Monitor. “According to the law, the working day is eight hours. Why then did I work 16, 18, 14 hours per day?” She pointed to legal and general hypocrisy about women’s place and worth in society.

In 1996, she “bought herself out” of the brothel where she worked and married one of her customers. After suffering years of physical and verbal abuse from her husband, she left him in 2001, bruised and with nothing but the clothes she had on. “There was nowhere I could go, anything I could take. But my life was in danger and I was grateful to have saved it,” she said.

The next year, 2002, she came to Istanbul with the help of Sefkat-Der, an association that helps the homeless and the victims of abuse. For the next few years, she worked odd jobs in Istanbul, but more often than not she was unemployed, hungry and without a roof over her head. She stayed homeless on the streets of Istanbul for four and a half months in 2003-2004, with no money for a bath, eating table leftovers in restaurants and sleeping in hospital emergency rooms. But in mid-2000s, she reconnected with Sefkat-Der and took leadership of the initiative that in 2014 started distributing free soup to homeless people in Istanbul. For a whole year without a day of break, she would make soup and distribute it to the homeless until 4 a.m.

In 2016, she attended a conference as a speaker where she introduced her dream of opening a restaurant that would share food with the homeless and employ them. She soon got support from individual donations and corporations, and in November 2017 established a foundation and opened the restaurant.

Since then through June 21, with help of over 600 volunteers, the foundation has delivered at least 41,330 plates of food to “homeless friends” and provided 38 hours of psychological support, 24 hours of introductory cooking classes and three hours of industrial hygiene education. In cooperation with the TIDER food bank, the initiative has saved more than 2,000 kg of food from being wasted. Six days per week, 100-120 people benefit from free meals, with a record of 183 people in one day. Many top chefs from Istanbul have supported Tukrukcu’s efforts since the restaurant’s opening. A renowned baker provides bread and companies provide sponsorships. Most recently, an eight-month cooking collaboration program was created by the restaurant and the Radisson Hotel Group and started in May this year. Two executive chefs cook and serve a special menu for the guests at her restaurant for a day each month.

Tukrukcu has been attracting media attention thanks to her tireless efforts, and her ambition is to create even more sustainable and meaningful change. Her next project for 2020 is to create a laundromat and shower space that would work similarly to the restaurant — serving paying users during the day and people without means at night.

She also hopes to open a rehabilitation center offering services that help address the various kinds of trauma facing the homeless.

The activism that stems from her own personal experiences has helped raised awareness, shedding light on the hardships of those who are ignored by the state and society. Tukrukcu was also an independent candidate for the parliamentary elections in 2007, driven by her mission to humanize women who have been living fates similar to hers and give them visibility.

Today, she often speaks at different universities around Turkey. She enjoys interacting with young people because they are receptive to her storytelling, she told Al-Monitor, adding that there are still thousands of women out there in situations like hers.

In her appearances, she urges a change in narratives about the marginalized and ostracized and the lifting of prejudices and judgmental attitudes. Whether she's talking about people experiencing homelessness or women who are raped or sold as sex workers, she fights labeling without nuance. She calls out cultural prejudices and invites both the state and those in the audience to support her restaurant by eating there as a customer, volunteering or by spreading the word about similar projects.

“I am not an educator. I can tell my experiences and you will draw your lessons from that,” Tukrukcu told Al-Monitor. “We didn't come to this world to be humiliated, ostracized and trampled on. There are so many homeless graveyards in Turkey! And I don’t want to go there. Let that be my last word.”