In Turkey, soup is more than a dish; it is the bearer of a vast culture. 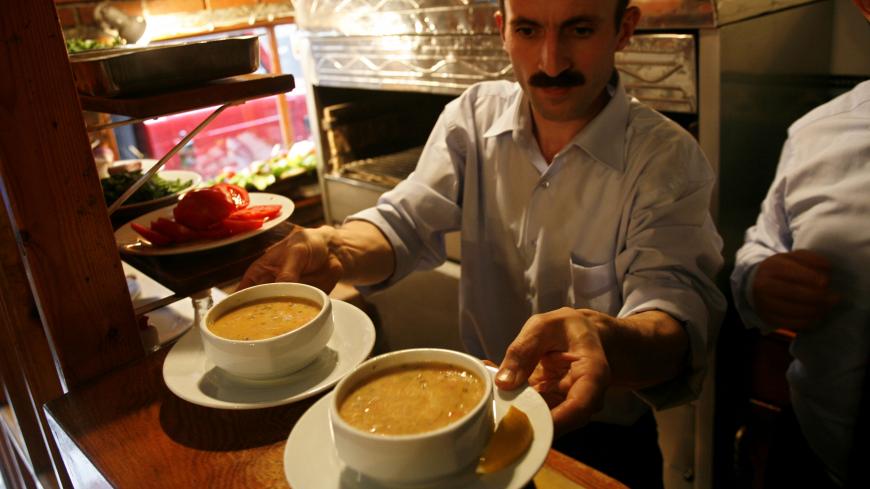 Turkish breakfast today is famed for its wide range of selections, with two dozen or more small plates of everything from crumbly cheese to fried garlic sausage to a mixture of tahini and molasses all found on the same table. It is not unusual to begin late, particularly on weekends after a late night. The meal is slow-paced and communal, and often enough to keep one full until dinner.

But in the city of Gaziantep, considered by many to be Turkey's culinary capital, the most prized breakfast is a serenely spicy and hearty soup called beyran, and only the early bird gets it. Tender strips of lamb are topped with rice and then drowned in a fiery broth teeming with red pepper flakes. The best spot to get it is a restaurant called Metanet — which aptly means “strength” or “backbone” in Turkish — in the heart of Gaziantep's old city, but the morning rush begins at the crack of dawn and it tends to sell out quick.

In Turkey, soup is more than dish or even a meal. It is the bearer of a vast, rich culture and an indispensable pillar of the Turkish culinary fortress. There are countless recipes from every pocket of the country made from a dazzling wealth of ingredients, from the familiar to the unlikely.

“In every region, soup is atop the list of essentials. If there are many things we long for, the absolute must for everyone is the soup of their land. People really love it and long for it,” said Musa Dagdeviren, the owner of Istanbul's celebrated restaurant and culinary institution Ciya and an eminent scholar on the cuisines of Anatolia.

Ciya is renowned for its extensive variety of dishes from all over Turkey, some of which have been rescued from near extinction by Dagdeviren and preserved in the restaurant. Within this canon is a rotating cast of soups culled from regional recipes. According to a customer's tally, Ciya has served over 400 different kinds since its inception.

“When no one except from the region it came from knew that there was soup made from mulberries, we brought it here and served it,” Dagdeviren told Al-Monitor.

“There are cold soups consumed during the August heat, there are soups made for weddings and those made from raisins or apricots,” Dagdeviren said, adding that there are hundreds of varieties of tarhana alone, a dried powder blend of yogurt, tomato paste and grains used to make soup.

“Soup is clearly a crucial part of Turkish food culture. It seems to be eaten at almost any time of day, from breakfast to late at night. Any restaurant will always have at least one soup on offer,” Vidar Bergum, an Istanbul-based Norwegian food writer, told Al-Monitor. Bergum has garnered more than 9,000 followers on Instagram, where he showcases his creative, colorful takes on Turkish cooking. One of Bergum's first encounters with Turkish cuisine was a bowl of iskembe, a pungent tripe soup often consumed late at night as it is believed to stave off hangovers.

Iskembe is one of the four classic soups served in Istanbul restaurants, according to Dagdeviren. The other three are tavuk suyu corbasi (chicken noodle soup), paca (sheep's foot soup) and mercimek corbasi (lentil soup). At affordable restaurants all over the city, a common on-the-go meal is a bowl of lentil soup with a couple wedges of crusty bread baked that day, invigorating fare that can be had for pocket change.

In an unassuming, compact two-story storefront in the heavily gentrified Istanbul neighborhood of Karakoy lies the Karakoy Corba Evi, which opened around the time that the area was being inundated with hip bars and coffee shops. This “soup house” serves 20 different varieties, which range from 6 to 15 Turkish lira ($1.5-3) a heaping bowl. The menu includes the classics as well as less common soups including karalahana corbasi (kale and bean soup), a Black Sea specialty. Full or half portions can be ordered, allowing diners to sample one or more.

On the cover of the latest issue of Yemek ve Kultur (Food and Culture), a quarterly magazine that Ciya produces, a group of people in the 1930's crowd around a pot of tarhana. Inside is an article about the varieties of soup in Turkey, including a hunger-inducing list divided by ingredients for soups from all over the country.

“It's more economical and filling compared to other foods. If there's nothing at home, there are absolutely the ingredients with which we can make soup,” writes academic Gunay Kut.

Dagdeviren calls soup culture in Turkey “sacred,” adding that it was common for mosques to distribute soup after the first prayers of the day and that a special soup is often the first thing consumed on Kurban bayrami or Eid al-Adha, the holiday of sacrifice.

Divine as it may be, soup in Turkey is a simple yet cherished part of the land and the people who live on and cultivate it.

“When I travel abroad, the one thing I miss is soup,” Dagdeviren said.