Turkey's hostility to Libyan forces led by Khalifa Hifter is part of an ongoing strategic power struggle in the region. 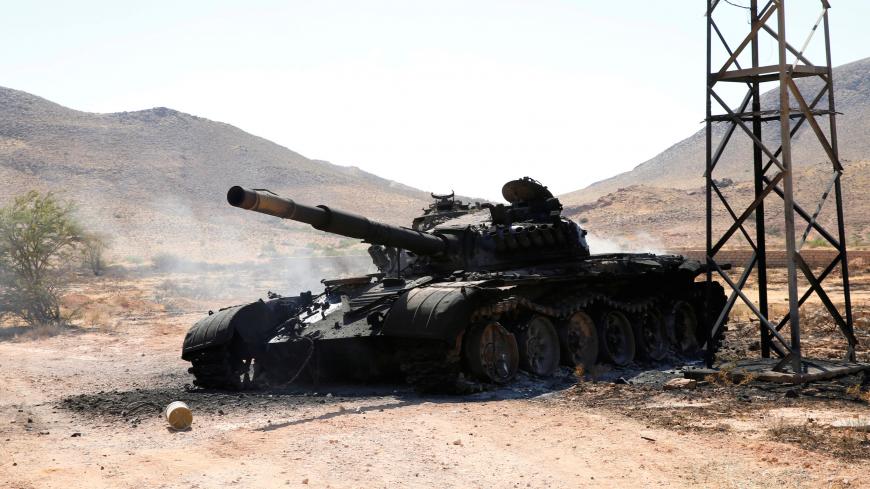 Turkey isn’t hesitating to escalate the situation in Libya even though the Turkish government is already under pressure on multiple fronts. Why? Ankara's reasoning has to do with issues far larger than Libya itself.

Currently, two rival seats of power are contesting for supremacy in Libya: Tripoli, the seat of the UN-recognized Government of National Accord, and an “interim” government led by Gen. Khalifa Hifter, supported by a parliament based in the eastern city of Tobruk. Hifter leads the Libyan National Army of the Tobruk government and controls much of the country’s eastern and southern regions. Starting in January, the Libyan National Army launched a military campaign in the Libyan south to secure oil fields and eliminate groups that he defined as “criminal gangs.”

At the beginning of March, the Libyan National Army announced it had taken full control of southern Libya after capturing several cities and oil fields. This military offensive angered the Government of National Accord, which has pinned its hopes on Ankara's help, military and otherwise.

Over the last month, the crisis between Ankara and Hifter, who is backed by Egypt and the United Arab Emirates, came to the brink of armed clashes.

The latest incident was on July 1, when six Turkish citizens on a ship in Libya were detained by the Libyan National Army. The Turkish Foreign Ministry confirmed that six Turks were taken hostage. Ankara reacted strongly.

“The detention of six Turkish citizens by Hifter's illegal militia in Libya is an act of banditry,” the Turkish Foreign Ministry said in a separate statement. “We expect our citizens to be released immediately. Otherwise, Hifter elements will become legitimate targets.” Turkish media reported that Ankara had given the Libyan National Army 72 hours for the release of the hostages.

The six Turkish hostages, said to be working for a Libya-based oil company, were released and returned to their ship after the Turkish side’s strong reaction.

But why is Ankara paying so much attention to Libya? Why is the Turkish side not hesitating to escalate the situation at a time when the Turkish government is already under deep pressure stemming from problems in its Syria policy?

According to international media, this is because of the ruling party’s policy of supporting Libyan tribal and political groups with Islamist leanings. However, considering the actors involved in the balance of power, this is not enough to explain the Turkish position.

Turkey’s interest in Libya is more related to strategic balances in the power struggle going on in the eastern Mediterranean. While it is true that Turkey is supporting pro-Islamist groups in Libya, the Turkish actors involved in the conflict are not limited to the Islamist government in Ankara. They have connections with the Turkish military, especially its navy, which is certainly more secular than Turkey's ruling Justice and Development Party.

For Ankara, the worst-case scenario in the eastern Mediterranean is a possible agreement between Greek Cypriots and Greece on sharing of naval sovereignty areas. This could threaten Turkey’s and Turkish Cypriots’ rights and interests in naval sovereignty zones in the region, which is believed to be rich in terms of hydrocarbon resources.

According to a naval strategist, Greece has claimed rights over a naval zone of some 39,000 square kilometers (15,000 square miles) north of Libya following Libyan leader Moammar Gadhafi's 2011 death.

“Especially after 2013, Greece slowly but decisively filled the vacuum left behind by Libya and began to consider the international waters north of Libya as if they are its own territorial waters,” the strategist told Al-Monitor on condition of anonymity. “While there are rich natural gas reserves in the eastern Mediterranean, Greece’s seizure of Libyan territorial waters contributes significantly to its power south and southwest of Crete island that is seen as the gate to eastern Mediterranean.”

Thus, Turkey is trying to reach a deal with Libya about coastal sharing to curtail Greece’s naval sovereignty claims over the region. This could allow Ankara to increase its influence in the region to counter the pressure stemming from the Greek Cypriot-Greece-Egypt-Israel bloc and confine Egypt to the south.

Turkey’s Mediterranean coastal towns of Marmaris and Fethiye face Libya’s Derme, Tobruk and Bordiya and it could be possible to devise a demarcation accord between the two countries (although Greece's island of Crete lies in between). Ankara also thinks that given that Libya’s coast from its Egyptian border to Derne and Turkey’s coasts from Deveboynu at the southwest of Marmaris face each other, a demarcation of naval sovereignty zones is the most basic right of Turkey and Libya. Ankara says this is also in Libya’s interest as it could have a further 16,000 square kilometers of naval sovereignty if it signs such an agreement with Turkey.

Moreover, if Libya, with Ankara’s support, reaches a demarcation agreement with Greece using the mainland shores as basis, its cumulative naval sovereignty area could increase by 62% to reach at least 40,000 square kilometers.

In November 2018, Akar went to Libya to explain these options to the Government of National Accord. Sources said that during his visit, the Turkish defense minister tried to assure the Libyans that there would be substantial Turkish assistance for Libya’s capacity building and security efforts and called on Libyans to cooperate with Ankara in the eastern Mediterranean.

However, these efforts spearheaded by the Turkish military were undermined when Hifter attacked the Tripoli government. Hifter not only is supported by Egypt and the UAE but also gets along well with Greece and Russia. He is a respected military man in the eye of the Western world due to his pro-Western and secular stance.

In response to Hifter’s attacks, Ankara began providing the Government of National Accord with needed assistance; some say this included arms and soldiers. Some Greek and Egyptian media outlets even claimed that Turkish officers are actively involved in combat and are not just providing training and equipment support. Government of National Accord forces also are being equipped with sophisticated weapons systems, including Turkish-made armed drones.

All this shows that Ankara’s interest in the Libyan conflict is not based simply on politics or ideology but also on geostrategic concerns.

According to Ankara’s strategic mindset, if Turkey loses in Libya, it will be tightly confined to a limited area in the eastern Mediterranean. Thus Turkey will likely increase its support to the Tripoli government and its forces in the coming days.