The visit of the prime minister of Libya's Government of National Unity highlights an ongoing, close relationship with Turkey, with implications for the Libyan political process, and a likely signal to Egypt and the United Arab Emirates. 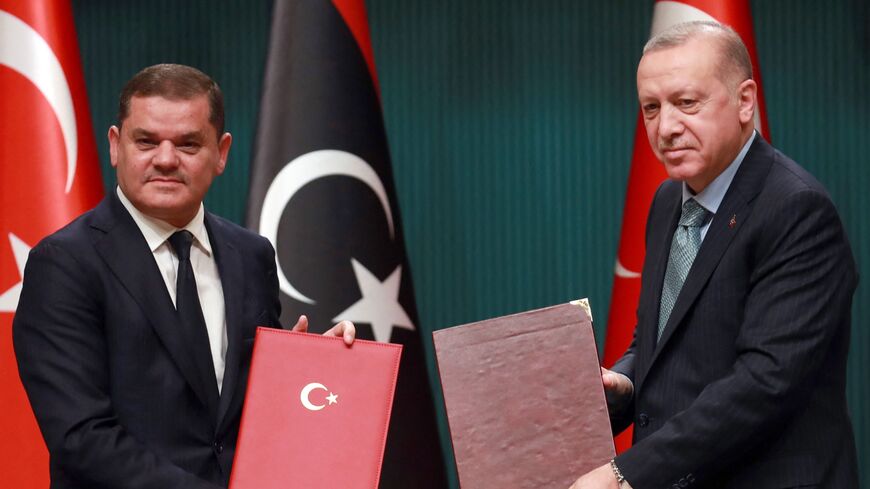 The prime minister of Libya's Government of National Unity, Abdul Hamid Dbeibeh, led a large delegation during Dbeibeh's visit to Turkey on April 12. The visiting officials took part in the first meeting of the recently formed High-Level Strategic Cooperation Council between the two countries.

At least five memoranda of understanding in economics, reconstructions, trade, and diplomacy were signed during the high-level talks in Ankara in another sign of the closeness of the two countries.

The size of the delegation and the commitments made by both sides provided a clear contrast with Dbeibeh's visit to the United Arab Emirates the previous week.

If anything, the size of the delegation sends the message that the Government of National Unity is inheriting the body and soul of its predecessor, the Government of National Accord. Dbeibeh not only committed his government to what Fayez Sarraj, the former prime minister, committed to with Ankara but redoubled his efforts to embrace Turkey. The former government was very close to Turkey in areas of defense and economics.

This contrasts starkly with Dbeibeh's visit to the UAE and his meeting with Crown Prince Mohammed bin Zayed Al Nahyan on April 8. While Dbeibeh’s inner circle was present, not a single other Libyan Cabinet minister was there. Not much was discussed other than how the UAE should stop supporting Field Marshal Khalifa Hifter and his Libyan National Army.

The UAE was one of the countries that publicly welcomed the new Government of National Unity when it was sworn in March 15.

The Government of National Unity was seeking its welcome by the UAE upgraded into more unequivocal support by having the UAE cut all links to local proxies in Libya, including Hifter.

However, Dbeibeh clearly was rebuffed by his host in Abu Dhabi, which still does not see the Libyan National Army as expendable yet.

The Ankara visit was, in a way, a strong message to Abu Dhabi and Hifter that Tripoli is getting even closer to Ankara. Hifter and his foreign backers, particularly the UAE, ferociously rejected Ankara’s close ties to Tripoli, particularly the military ones.

In November 2019, Sarraj signed a security memorandum and a maritime border deal delineating the sea borders between Libya and Turkey. The security deal gives Turkey the right to station troops on Libyan soil, train Libyan armed forces and freely use the country’s airspace. The maritime agreement marked each country’s exclusive economic zone in relation to the other — it is an extra bonus to further encourage Ankara to help defend Tripoli against the Libyan National Army.

When Sarraj signed both documents, his government was facing an existential threat and Libyan National Army forces were less than 10 kilometers (6 miles) from the center of Tripoli. Sarraj needed urgent military help to repel Hifter’s troops.

At the same time, Turkish President Recep Tayyip Erdogan was desperate for any political support to back his energy exploration efforts in the Mediterranean Sea. (Last summer, Ankara’s dispute with its neighbors peaked over the borders of its exclusive economic zone. At one point the diplomatic confrontation risked dragging Ankara and Athens, its historical regional enemy, into a military fight.) Ankara needed other regional countries to support its claims in the eastern Mediterranean. Tripoli needed military help to fight a conquering army — both sides needed each other; a deal was the obvious outcome.

Tripoli University law professor Fatima Adeeb told Al-Monitor, “Libya is like a superpower given its long Mediterranean coast” and getting Libya’s endorsement by signing a deal recognizing Ankara’s [exclusive economic zone] claims is a huge boost for the latter.”

A borders demarcation expert in the Libyan Foreign Ministry who spoke on condition of anonymity told Al-Monitor, “The deal between Libya and Turkey does not infringe any Libyan interests” in terms of the exclusive economic zone while giving extra legitimacy to Turkey’s claims.

Turkey has been unable to come to an agreement on the borders of its maritime exclusive economic zone with any other Mediterranean country except Libya.

Greece, Cyprus, the European Union and France have all rejected Turkey’s maritime deal with Libya. Greece says Turkey’s claims into wider exclusive economic zone areas infringe on Athens’ rights, particularly around the island of Crete, the closest European shore to Libya. Greece was so angry over the Libya-Turkey deal that it expelled Tripoli’s ambassador in Athens, Mohamed al-Menafi, who later became chairman to the newly formed Libyan Presidential Council — effectively Libya’s president

At first, Egypt joined the band of protesting countries but later kept quiet as it received the newly elected Dbeibeh in Cairo. Cairo saw the benefits of being close to the Government of National Unity outweigh any disadvantages caused by the maritime deal between Tripoli and Ankara. This point was demonstrated by the visit of Egyptian Prime Minister Mostafa Madbouli to Tripoli, where various economic deals were signed on April 20.

Libya’s Government of National Unity is clearly counting on long-term Turkish commitments to Libya’s security and sovereignty even though such close ties with Ankara are likely to anger the UAE in particular. Abu Dhabi is an ideological rival to Ankara and both capitals are seeking dominance in the eastern Mediterranean and North Africa, where Libya is an important country. If it continues its support of Hifter’s Libyan National Army, Abu Dhabi can make life very difficult for the Government of National Unity and Dbeibeh himself, perhaps further pushing him into Ankara’s open arms.

On April 22, Government of National Unity Foreign Minister Najla al-Mangoush, speaking before a group of Italian members of parliament in Rome, was quoted as saying something that appeared contradictory to the Government of National Unity's official policy toward Turkey. Commenting on the departure of foreign troops from Libya, the minister is quoted as having said, “We asked everyone, including Turkey, for cooperation to get all foreign forces off Libyan soil.”

A day later, on April 23, the Foreign Ministry issued a clarification in which it said the Government of National Unity considers “all foreign mercenaries and troops to be the same.” Crucially, the statement, at the end, says, “The Foreign Ministry respects relevant valid international agreements.” The reference to “international agreements” here is what sets Ankara’s deal with Tripoli apart from Abu Dhabi’s support to the Libyan National Army. Ankara publicly signed a deal with a legitimate government recognized by the United Nations while Abu Dhabi is secretly dealing with a military man that neither the Government of National Unity nor the UN recognizes in any official capacity.

Still, the Government of National Unity did discuss the idea of Turkey pulling its troops and mercenaries from Libya in exchange for economic contracts. A political adviser to Libya’s former government with firsthand knowledge of the 2019 security deal told Al-Monitor on condition of anonymity, "Ankara was not very keen on having troops on Libyan soil” but was keen on having close economic and security links with Tripoli.

When asked if Turkey insists on keeping its troops in Libya, the advisor said, “Not at all as long as the security memorandum that brought them in is upheld and Ankara is given favorite economic” status. This, in part, explains why multiple economic deals were signed during Dbeibeh’s visit to Ankara.

On the other hand, Abu Dhabi and Moscow have no legal defendable position when it comes to why they are supporting the Libyan National Army and Hifter, who has no official portfolio in the Government of National Unity.

Supporting him, in any way, violates Libya’s sovereignty and several UN resolutions, including Resolution 1973, banning the supply of arms to Libya. The most recent measure is Resolution 2571, adopted April 16. It reemphasizes the arms embargo while renewing calls to other countries to refrain from meddling in Libya’s domestic affair. A point to keep in mind is that Hifter is considered by many countries to be a renegade general bent on ruling Libya by force.

The formation of the Government of National Unity, while it might be good news to Libya and bring a glimpse of hope for ending Libya's decadelong bloodshed, does not represent any guarantee of such a positive outcome.

Over the last 10 years, the Libyan conflict became a proxy war between regional and international powers. At the same time local actors lost their ability to decide for themselves.

Any new government that will result from the planned Dec. 24 elections will inherit most of what the Government of National Unity did, just like what the current government inherited from its predecessor. Unfortunately, much of the Government of National Unity’s legacy will likely make life even more complicated for any new authority that might emerge if the December elections take place. An independent Libya, even if foreign meddling ceases, still has a long way to go.