Can Tunisia get back into international good graces after imprisoning UN expert?

Following the release of UN expert Moncef Kartas, Tunisia was elected a nonpermanent member at the UN Security Council, which some say should help it regain the trust it lost on the international scene. 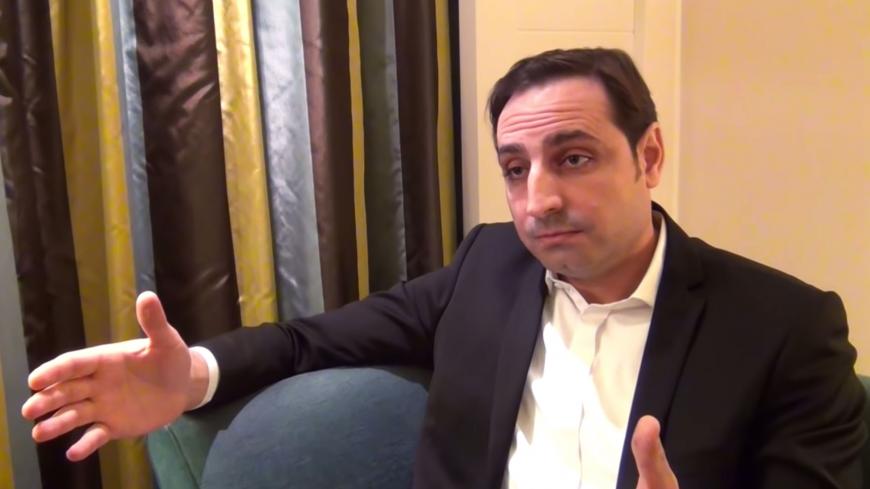 UN expert Moncef Kartas takes part in an interview, seen in a still from video recorded in the Netherlands, Jan. 22, 2015. - YouTube/War and Peace Talk

When Tunisia was elected as a nonpermanent member of the UN Security Council on June 7, it was under the cloud of the Moncef Kartas affair.

In January 2020, Tunisia will take its seat on the Security Council — it will be Tunisia’s fourth tenure as a nonpermanent member of the international body, but its first as a democratic republic. The question is whether the emerging democracy can redeem itself in the eyes of the international community in the coming six months, before Tunisia begins its two-year tenure at the Security Council.

On the afternoon of May 21, prior to the vote at the United Nations, Tunisian Foreign Minister Khemaies Jhinaoui was visiting Oslo, Norway, while back at home the scandal was still raging over Tunisia’s detention of Kartas — a member of the UN Panel of Experts on Libya — for 56 days on charges of treason and espionage.

Jhinaoui was referring to a visit he later made to the United Nations, where the vote on new Security Council members took place June 7.

His concerns would not have centered on whether or not Tunisia would be elected to the Security Council, because Tunisia was running unopposed. Judith Vorrath, a senior associate at the German Institute for International and Security Affairs, told Al-Monitor that in such a situation, where Tunisia was one of two states vying for two empty seats in the Africa group, “It’s very hard not to get elected.”

Jhinaoui’s solace rather would have come from being relieved of the tensions involved in possibly having to represent his country at the United Nations while holding a UN employee in Tunisia’s notorious prison for terror suspects (Mornaguia Prison) — an act that contravened UN rules regarding immunity of employees on mission.

The Kartas affair had created deep diplomatic tensions between Tunisia and both the UN and Germany, as Kartas holds both Tunisian and German citizenship. His arrest has had “a negative impact on the [UN] panel's work,” Deutsche Welle quoted a UN source as saying.

UN spokesperson Stephane Dujarric told Al-Monitor, “As a matter of principle, we believe that all should cooperate with experts on mission for the Security Council.” He added that “safety is the responsibility of the member state in which they are working.”

Tunisia’s judiciary had not shown any sign of budging since Kartas’ arrest March 26 until May 21, when he was released.

William Lawrence, a professor of international affairs at George Washington University and a former US diplomat, told Al-Monitor that Tunisia’s release of Kartas was because Tunisian officials “wanted to get back into the good graces of Germany and the international community,” confirming that there were “back-channel pressures from Germany.”

Lawrence said Tunisian officials’ insistence on their power to detain Kartas was based on the fact that he holds Tunisian-German dual citizenship. “They lost more internationally than they gained locally,” Lawrence said.

Jurgen Schulz, the chair of the UN Security Council's Libya sanctions committee and Germany's deputy permanent representative to the UN, said after hearing about Kartas’ release, “The arrest and detention of Mr. Kartas is a very serious concern for us.” Schulz said Kartas “enjoys immunity from arrest and detention in his capacity as a UN expert on mission. The immunity of UN staff and experts is an important element of our multilateral system. It must be protected and upheld.” The quotations come from a transcript of an open discussion regarding the situation in Libya at the UN in New York provided to Al-Monitor by the German Foreign Ministry.

By emphasizing the issue of immunity and the need to respect it, the statement seems to be sending a warning to Tunisia. Schulz said he was “encouraged” by the release, but was waiting on further information.

Tunisia has not backed down entirely on the case of Kartas. Weeks after his release, his lawyer, Sara Zaafrani, said the case has not been closed. Lawrence said, “Part of [Tunisia] saving face was to not completely close the file.” But he added, “For all intents and purposes, the case has been dropped.”

In his speech following the UN vote selecting Tunisia for the Security Council, Jhinaoui described his country's role as being “the voice of Africa and the Arabic world” at the council. He emphasized issues such as human rights and women’s rights in conflicts.

Outwardly it would appear that Tunisia wants to take over Morocco’s former role as being a host for important meetings and conferences — in the last few months Tunisia has hosted the Arab Summit, the International Federation of Journalism conference and RightsCon — and to continue to be a hub for dialogue concerning Libya. Lawrence described Tunis as being “Libya’s second capital.”

Tunis hosted talks between the Algerian, Egyptian and Tunisian foreign ministers to discuss a road map for peace in Libya.

However, as Egypt is an ally of the United Arab Emirates and Saudi Arabia — which have been both reported to be supplying arms to the Libyan National Army led by military commander Khalifa Hifter — it is hard to say how independent Tunisia would be on the question of how peace should be achieved in Libya and where Tunisia's loyalties lie.

Vorrath said that “nonpermanent members are not powerless [on the Security Council]” and that “they can be speaking for interests not only their own. They can propose topics and put into focus specific issues.”

Vorrath said that next year, Tunisia will be on the UN Security Council and thus, on sanctions committees and will "have to engage with sanctions in a responsible way.”

The first year of Tunisia’s Security Council tenure overlaps with that of Germany. A German Foreign Ministry source said, “Germany will be working with all member states on the Security Council, including Tunisia, in a constructive and cooperative spirit.” Farrah Hawana, a lecturer in International Politics and Security at Aberystwyth University in Wales, told Al-Monitor that within the formal architecture of the UN Security Council, “Germany cannot sideline Tunisia.”

Should Tunisia wish to fulfill the ambitions laid out by Jhinaoui, the country, like many smaller, less rich nations, has “a qualitative disadvantage,” Hawana said. She said that to operate effectively and have influence at the UN a country “requires expertise and human resources across the domains,” such as experts in international law, security as well as human rights and so forth.

The second half of 2019 presents Tunisia with many opportunities to recuperate its public image. Aside from the elections this autumn — which, if run well, will assert Tunisia's democratic credentials — the country must address primary issues of human rights as per the UN special rapporteur’s call for the Tunisian government to correct the issue of freedom of public assembly and fundamental civil liberties.

Al-Monitor repeatedly tried to get a comment for this story from the Tunisian Foreign Ministry, but was informed that the minister was not available.

As complex as these problems are, they present platforms for Tunisia to prove its worth as a trustworthy democracy ahead of January.

However, the Kartas issue still remains. The Tunisian judiciary must find a way to close the case that rebuilds trust between Tunis on the one hand and the UN and Germany on the other.