The high-level Hamas visit to Tehran does not bode well for the movement's arrangement with Israel. 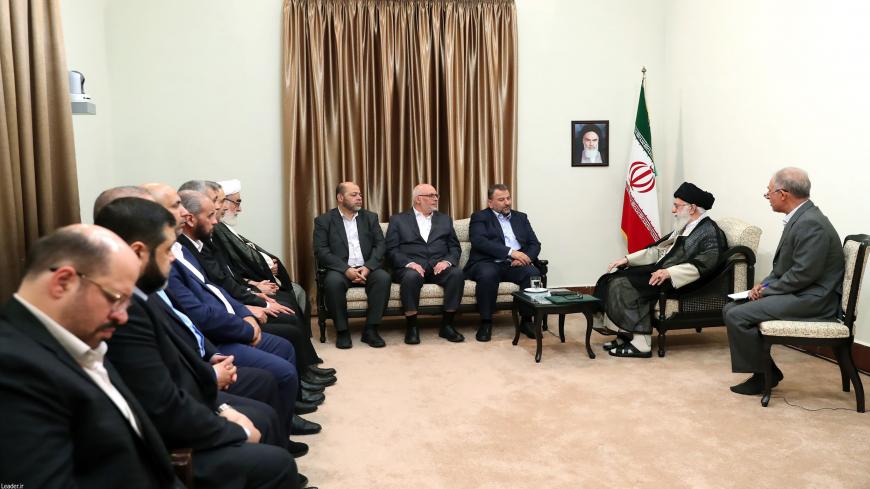 A Hamas delegation went to Tehran this week and met with Iranian Supreme Leader Ayatollah Ali Khamenei July 22. Ever since the deputy head of Hamas’ diplomatic wing, Saleh Al-Arouri, was elected to the position two years ago, his goal has been to tighten contacts with Tehran in light of the disconnection that has prevailed since the days of former Hamas chief Khaled Meshaal, who is persona non grata in Iran.

Al-Arouri has visited Tehran before, but this time he was greeted as an honored ally when he met with Iran’s spiritual leader. Khamenei promised Al-Arouri continued military and economic aid because “victory over the enemy will only be achieved through struggle and resistance” and added, “Only a few years ago the Palestinians fought the Zionist enemy with stones, and today they are equipped with precise missiles.” Tehran gave the missiles to Hamas in part due to Al-Arouri’s reconciliation efforts.

Al-Arouri promised “Hamas will be Iran’s first line of defense in the shadow of the recent aggression of the West” and that “any enemy of Iran is an enemy of Palestine and of the opposition axis.”

Al-Arouri, who has lived in Beirut since being expelled from Istanbul, claims to speak for all Palestinians and proudly praises their strong military resistance versus forces that are ten times larger and more powerful than Hamas, as if Hamas were a world power. Perhaps in Hamas’ present condition, words are important even if they have no connection to reality.

At the meeting, Al-Arouri handed Khamenei a letter from Ismail Haniyeh, chief of Hamas' political bureau. In it, Haniyeh promised that Hamas would assist Tehran in the event of war. He said he wanted to attend the important meeting in Tehran, but was unable to travel there as the Egyptians refused to allow him passage through the Rafah border crossing. Thus Haniyeh was unable to conduct his planned fundraising campaign among Egypt’s sworn enemies: Qatar, Iran and Turkey. Haniyeh did not dare criticize the Egyptian decision that imprisoned him in Gaza — no point in angering the Egyptians. Haniyeh, an enthusiastic supporter of strengthening ties with Tehran, understands that these ties come at a price, especially when Egypt is investing great efforts into reaching an arrangement with Israel and he is forced to watch Al-Arouri fall into Khamenei’s arms.

To judge by the fawning proclamations of the Hamas leaders in Tehran, Al-Arouri and Haniyeh chose their side over an arrangement with Israel. After all, what front does Hamas face except for Israel?

“Israel will need to closely examine what took place this week within Hamas,” an Israeli security source told Al-Monitor on condition of anonymity. According to the source, Tehran's assistance that Hamas boasts about and Khamenei promises to continue “means one thing only, as far as Israel is concerned." He said, "It means that Hamas commits itself to fulfilling Tehran’s demands and pleasing Tehran’s leaders for assured assistance. Khamenei promises precise missiles, money and extended assistance and in exchange, Hamas commits itself to manning the front lines. It’s that simple.”

Hamza Ismail Abu Shanab, the son of Hamas leader Ismail Abu Shanab, who was assassinated by Israel in 2003, wrote an article for the Hamas daily newspaper Al-Risala in which he detailed Iran's generous aid to Hamas. This article was published on June 29, well before the Khamenei-Arouri meeting. According to Shanab, Iran has done the following for Hamas: funded the tunnel project (that has been frozen), assisted the Izz ad-Din al-Qassam Brigades in developing the range and precision of its rockets and trained dozens of fighters in combat methods and intelligence collection. The goal of the article was apparently to show the Iranians that their investment hasn’t gone down the drain. The author clarified to the Iranians that the resources they invested have a purpose, especially on the backdrop of the worsening of the Gulf crisis, while Tehran faces threats from Western powers and with the smell of war in the air.

At this point, the Israeli defense system still has not come out with a recommendation to halt the easements in the Gaza Strip decided in the talks for an arrangement. Instead, another reason to worry has been added to the list.

The meeting in Tehran again revealed the internal controversy within Hamas over several questions: What is preferable — good relations with neighboring Egypt, the country that controls the Strip’s lifeline and can open and close it at will? Or should the movement turn to Tehran, which gives Hamas economic and military assistance with a price tag?

Hamas' Gaza chief Yahya Sinwar is pushing for an arrangement and wants to let Egypt concentrate on negotiations with Israel, hoping to lighten the blockade on the Strip and improve Gaza’s abysmal economic situation. But Haniyeh and Al-Arouri are threatening this process. The danger is real. Israel will not advance to the later stages of the arrangement — such as establishing a joint industrial region, allowing the importation of still-forbidden raw materials (as they could be used to create weapons) and allowing thousands of Palestinian workers from Gaza to work in Israel. All these goals will be impossible if the movement’s leaders decide to dance to Khamenei’s tune.

“Hamas always knew how to sabotage itself, and the Gaza residents are the ones to pay the price,” the Israeli defense source told Al-Monitor. According to the source, Hamas violates the number-one rule written by Hamas’ leader and founder, Sheikh Ahmed Yassin. “Despite his affection and admiration for the Iranian Revolution and the ayatollah regime that rose in Tehran, he was not willing to receive Iranian assistance and thus be subject to Tehran’s dictates,” the anonymous source said.

By contrast, the present Hamas leaders are taking the opposite approach, betting on Tehran while enslaving Gaza and its residents to Iranian interests and endangering the arrangement with Israel.