Where should Israeli Arabs spend the summer?

So long as the Israeli government does not solve the severe housing shortage of its Arab citizens, it is logical that Arab families will try to upgrade their lives by moving to Jewish localities. 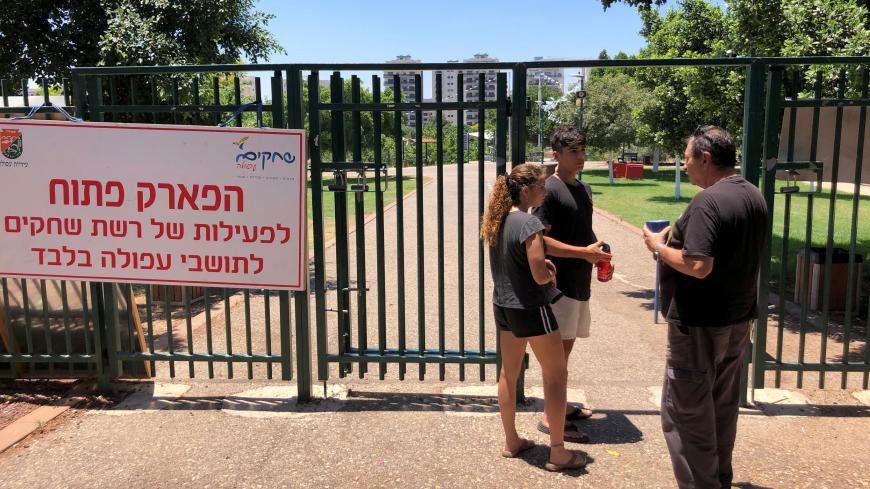 A security guard checks the identification of visitors near the entrance to a park in the northern Israeli town of Afula, July 14, 2019. The sign in Hebrew reads, "The park is open to Shchakim Network activities for residents of Afula only." - REUTERS/Rami Ayyub

The Afula municipality reneged July 14 on its decision to close its municipal park to non-Afula residents, following a petition submitted by Adalah - The Legal Center for Arab Minority Rights in Israel. Judge Danny Tzarfati of the Nazareth District Court made it clear to the municipality that it is illegal to close off a public place and exact payment for entrance. “Just like you don’t close off a street, you don’t close a park, without connection to the discrimination issue,” he said. Israel’s Attorney General Avichai Mandelblit joined the petition, and in the official opinion that was submitted to the court, he wrote that the decision of the Afula municipality to close the park to nonresidents, raises important questions regarding the motives behind such a decision.

The court did not address the issue of motive but restricted itself to determining that the decision to close the park was illegal. Nevertheless, the question still remains of what was behind the municipal decision to forbid entrance to nonresidents of Afula to the park. Was the welfare of the local residents at the foundation of the decision, or the desire to keep out residents of the nearby Arab localities from entering the park?

Past experience shows that the motive for closing the park was racism, pure and simple. Only last month, Afula municipality head Avi Elkabetz, his deputy Shlomo Malachi and other members of the city’s council attended a demonstration against selling a house in the city to an Arab family. The demonstrators waved flags produced by the Lehava organization, known for its racist activities against Arabs. Its chairman, Bentzi Gopstein, expressed support for burning down churches in 2015 and had also been indicted for incitement in the past.

What would be Israel’s response if the mayor of Berlin, for instance, would participate in a similar demonstration against the selling of a house in his city to a Jewish family? Wouldn’t the prime minister rush to tweet that such a demonstration is anti-Semitic with neo-Nazi overtones? He would also probably contact German Chancellor Angela Merkel and express his protests to her about the demonstration and the mayor’s attendance at such a venue.

But when it comes to a demonstration in Afula against Arabs, Prime Minister Benjamin Netanyahu and his ministers are silent. Do they really believe that an Arab family should not purchase a home in the city, like any other Israeli family? How can they remain silent when they are witness to this phenomenon against Arab citizens?

We find other sources that support such a motive by the Afula municipality, such as what the mayor wrote during his election campaign in 2018, in regard to closing the park to outside residents. Then he warned against “taking over the park” and detailed how such a process could be legally fought. In another post, he called the addition of Arabs to the city “destruction of the Jewish character of Afula” and claimed that it is a madness that must be stopped. Let's not forget the private swearing-in ceremony — invented by the Afula mayor — used by the Afula municipality, which includes the sentence, “maintain the Jewish character of the city.”

All this leaves no place for doubt regarding the real motive of the Afula municipality for closing the park to nonresidents of the city.

The Jewish public must understand that when an Arab family decides to move to a Jewish city or neighborhood, it does so because of quality of life considerations. Yes, Arab citizens also deserve quality of life. I suggest that anyone who objects to such a move should himself live in the locality from whence came the Arab family, for at least a full month, before going out to demonstrate.

I often am asked, “Why aren’t there Jews in Arab localities?” The answer is simple: Usually, people want to upgrade their quality of life, and not lower it. By the way, there are some Jews who chose to live in Arab localities such as Tira or Isfiya, for instance; no demonstrations against them or statements by the mayor against the new residents have been reported. I also don’t remember hearing about religious leaders in Arab localities telling the residents not to rent to Jews, as did 50 city rabbis whose salaries are also funded by Arab tax payers.

According to Adva Center statistics, hundreds of new localities for Jews have been established or enlarged since the establishment of the state; the Arabs have not received permission to create new localities, with isolated exceptions, “in order to concentrate the Bedouin in the Negev and Galilee regions.” Similarly, no new Arab neighborhoods have been built in the mixed cities. Although Arab citizens in Israel constitute about a fifth of the population, the jurisdictions in which most of them live does not constitute even 3% of the territory of the state.

Thus, we have reached a situation in which the state suffocates its Arab citizens and turns the current Arab localities into crowded sardine containers. How many people know that in Israeli Arab localities, there are limitations regarding the construction of tall buildings? Approval of master plans for Arab localities is a long process that almost never ends. Even when a specific government promoted a specific, localized solution, it was usually for a very limited or specific initiative that does not fully answer the needs of the local residents.

Does the state encourage entrepreneurs and contractors to found new neighborhoods or residential buildings in Arab localities? The answer is no. This explains why there are almost no parks in the Arab localities. And this is what forces Arab residents who want to spend quality time with their children to search for parks in nearby Jewish localities.

It is important to remember that the diversity of Israel’s population is quite astounding. Instead of exploiting this diversity and serving as a model for other countries, we are occupied with assigning negative labels to each other and hatred of the other, instead of getting to know each other. Unfortunately, everything begins in the prime minister's office that continues to incite the public against Arab citizens. There was testimony to this even in the election campaign last April, when the Likud installed hidden cameras in the ballot boxes of the Arab localities.