Iraq seeks to issue identification papers for IS children

Many children born under Islamic State rule in Iraq do not have Iraqi citizenship, but the government is seeking to change that. 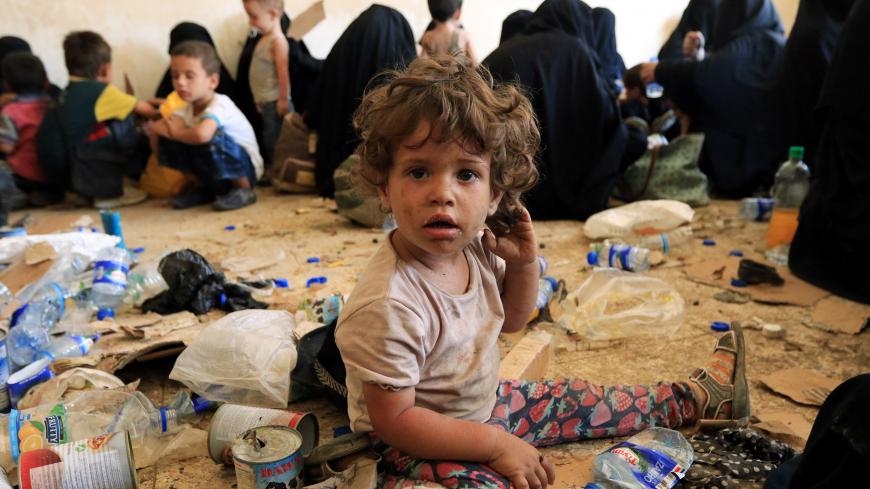 Children of families of Islamic State militants are see after they surrender to the Kurdish peshmerga forces in al-Ayadiya, northwest of Tal Afar, Iraq, Aug. 30, 2017. - REUTERS/Ari Jalal

More than two years have passed since Iraq was liberated from the Islamic State (IS). The Iraqi government is now working to issue identification documents for children born under IS rule.

The Iraqi government has now altered its previously undeclared position — that it would not issue documents to these children — and will move to grant them Iraqi citizenship. Such a step aims to prevent thousands of children from unknown fates.

Rezan al-Sheikh, the rapporteur for the Children and Women’s Affairs Committee of the former parliament, said June 26 that the government has started developing mechanisms to resolve the problem.

“The government adopted fair and just mechanisms away from any personal and sectarian stances," she said. "Hence, those children will be granted identification documents.”

Lawyer Ismail Saad said the Iraqi government’s move to grant these children identification documents is “a positive” step that would save them from living “in limbo.”

“It is necessary for these decisions to be implemented in a way that does not obstruct the issuance of identification documents," he said. "It is also necessary to speed up the issuance of papers for those who need to be enrolled in schools.”

When born under IS rule, the children were registered at IS-affiliated "Sharia courts," which issued them birth documents. The Iraqi government has refused to recognize such documents.

These children, a number of whom continue to live in the camps, have not received any health care and cannot be enrolled in school unless the government issues them identification documents.

Wahida al-Jamili, the rapporteur for the parliamentary Human Rights Committee, said that special tribunals will be established for the registration of children born under IS rule. They will be given birth certificates based on papers and witness depositions, she said, adding that the process will be easier for children whose parents are alive.

"It is unacceptable to leave Iraqi children without identification documents that would guarantee their right to health, education and food," she said.

A source at the Supreme Judicial Council of Iraq spoke to Al-Monitor about how the documents will be issued. “The issuance of documents will be an easy process for those whose parents are still alive," he said. "The parents and two witnesses will need to show up in the courtroom.”

He added, “DNA testing will probably be adopted. This will, however, take a long time and result in months of delay before a number of them get health care and can be enrolled in the government or civil schools and nurseries.”

The judicial source indicated the authorities fear that the parents are affiliated with IS.

This is not a new issue in Iraq. Former Prime Minister Haider al-Abadi said in 2016 that the government does not have a problem registering children born under IS rule in their hometowns.

There are two categories of children in areas IS controlled. First are the children whose parents are known and not affiliated with IS. The Iraqi government is working to issue documents to these children. Next are the children born to Iraqi women and IS foreign fighters who entered the country illegally. Many of the latter parents were killed, detained or disappeared. The children remained with their relatives or foster parents. This category is the real problem for the Iraqi government, as it knows nothing about their parentage.

Women whose partners were either killed or disappeared are finding it difficult to convince Iraqi authorities that their children were born during IS rule in Iraq. These children are probably the last to obtain identification documents, probably because judicial and procedural adjustments are needed, given the absence of one of the parents.