What's behind recent spate of abandoned newborns in Gaza?

Three newborn babies were recently found in the streets of the Gaza Strip, raising questions about the reasons that could either be related to poverty or to illegitimate relations that the conservative society in Gaza rejects. 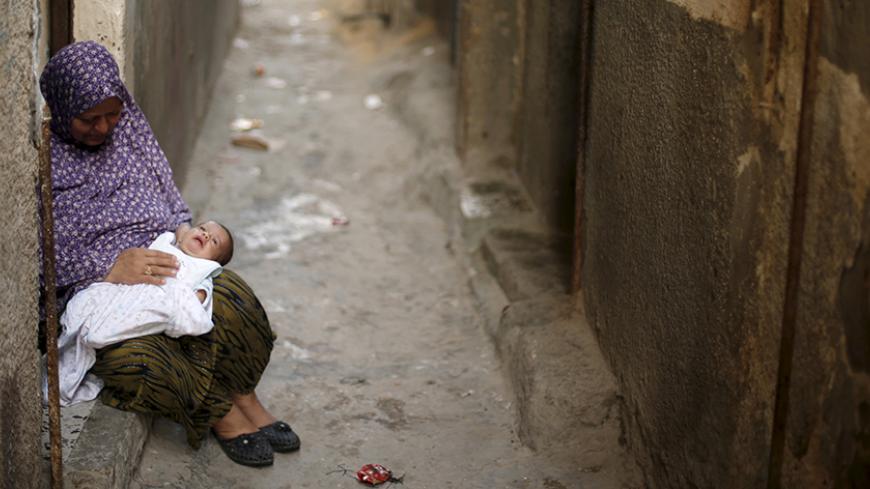 A Palestinian woman holds her grandchild as she sits at the entrance of her house to escape the heat during a power cut at Shatti (Beach) refugee camp in Gaza City, Gaza Strip, Sept. 15, 2015. - REUTERS/Mohammed Salem

GAZA CITY, Gaza Strip — In three separate incidents on Jan. 27, Feb. 4 and Feb. 20, residents in Gaza found three nurslings with unknown parentage left in the streets in the center of Gaza City and in the north of the Gaza Strip. At the end of 2016, another child was found among the olive trees in a deserted region in central Gaza. These cases have opened Pandora’s box.

The director of Mabarra Association that is specialized in caring for children with unknown parentage, Moumen Barakat, told Al-Monitor, “We have been handed two children with unknown parentage from the Palestinian police since the beginning of 2017. One was found in front of Al-Amal Institute for Orphans in Gaza City and the other in front of a mosque in the north of the Gaza Strip.”

He added, “With the two nurslings who were recently found [on Jan. 27 and Feb. 4], Mabarra Association is now home to 15 children with unknown parentage. The association offers the children all services — from medical and psychological care to education — so that they can look after themselves after completing university education. Caretakers who play the role of mothers attend to the children’s needs.”

The association enrolls the children in public schools and universities if they wish to continue their education through donations it receives from Arab, Palestinian and international charities.

On Jan. 27, citizens from Gaza found a newborn child left in front of Al-Amal Institute for Orphans; the baby boy was wrapped in a blanket but had no personal belongings or identification papers.

On Feb. 4, a nursling was found in front of a mosque in the north of the Gaza Strip when worshippers arrived at the mosque to perform the morning prayers. The Palestinian police said the two children were sent to Mabarra Association.

Barakat said that Mabarra Association was founded in 1993 to take care of 12 children with unknown parentage who lived in Gaza hospitals at the time, because there were no care centers to accommodate them. He added, “During the Israeli occupation of Gaza, before Israel’s retreat in 2005, the association would get 11 to 12 children with unknown parentage per year. But after Israel’s retreat, the number gradually dropped. In 2016, we only received one case, and this year two cases, since social accountability — which Israel disregards — is on the rise in Palestine.”

None of the children with unknown parentage who the police sent to the association returned to their families due to the absence of DNA tests. Barakat said that such tests would be available only if the concerned state institutions, such as the police, would request them. Searching for the suspected parents of these children is the job of the police rather than the association that is only specialized in caring for the children.

Ashour told Al-Monitor, “We cannot consider finding two abandoned children in the streets a phenomenon. But it is indicative of an unusual occurrence in the extremely conservative Palestinian society.”

Ashour said the two children who were found might have been conceived in an incestuous relationship. Families can lock up the pregnant woman, hide her from the neighbors and keep the child until birth, then get rid of it. It is illegal for a family in Gaza to cover up for a woman who conceived out of wedlock, which is against the law and Sharia, because in such cases she should be killed to preserve the family’s dignity, or she should abort the baby in the first weeks of pregnancy.”

Psychologist Zuheir Mallakha ruled out poverty as being the reason in the case of the two children who were found recently. Gazan society believes that each newborn brings his own fortune with him.

Mallakha said that the children were likely conceived out of wedlock, and the parents could not find a way to abort the pregnancy. He noted that leaving children in the streets is a scary humanitarian issue and carries negative social implications such as loose morals and easy illegitimate relations.

He described crimes of adultery and rape as barbaric crimes that have no consideration for the outcome. Normally, the culprits would abort the baby or leave it in the street to hide their crime. He added, “Due to the absence of the DNA test in the Gaza Strip, it has become difficult to find the real parents. Therefore, the rapist or adulterer is not worried about being found out.”

Mallakha said that the two children might have been conceived in a rape incident, but it is impossible to confirm this. Normally, the family of the rape victim fear for their daughter in terms of society’s judgmental attitude. They do not kill the woman because she is a victim rather than a culprit, and she resents the pregnancy, which makes it easier for her to give up the child with her family’s help.

After Al-Monitor conducted its interviews, a new case was reported on Feb. 20. A baby was found in front of Al-Amal Institute for Orphans in Gaza City.

Since there are no specialized centers to conduct DNA tests in Gaza, the easiest and safest option is to abandon the children who were conceived in incestuous or adulterous relations or as a result of rape. Palestinian society, after all, hides such crimes to avoid a scandal, and forgets that the biggest crime is abandoning the real victims — the children.