US sanctions on Iran could actually discourage the kind of democratic thinking the free world should want to foster. 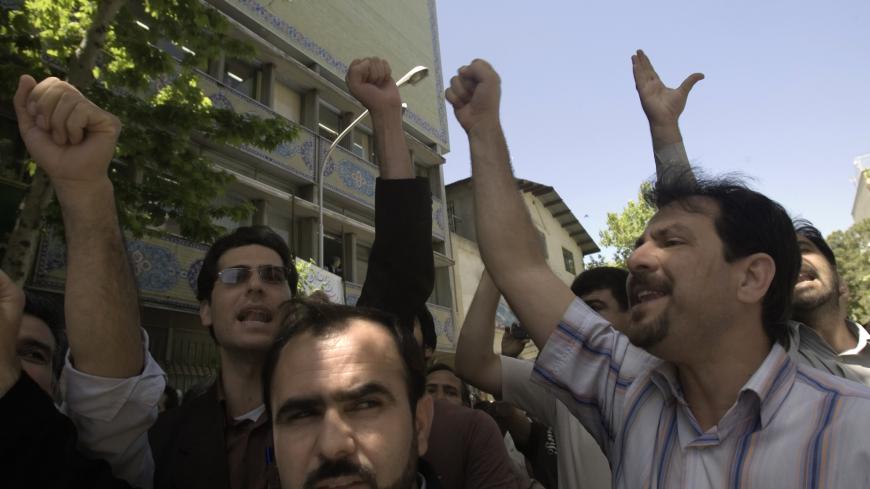 Iranian teachers take part in a rally asking for better pay in front of a Education Ministry building in Tehran, May 2, 2007. - REUTERS/Raheb Homavandi

Although US President Donald Trump’s administration denies seeking regime change in Iran, its “maximum pressure” policy clearly seeks a fundamental shift in Iran's government — which isn’t much different from a regime-change agenda in the eyes of Iranian authorities.

Many analysts don’t believe regime change would even be possible, and certainly not easy. US policy toward Iran hasn’t been able to change Tehran’s attitude, but has had serious social and political implications for Iranian society — which in turn have directly and indirectly caused a decline in civil activism  in new and independent nongovernmental organizations.

US policies, in particular those involving economic pressure, have had consequences for Iranian teachers’ unions and associations.

In 2013, the election of Hassan Rouhani as president paved the way for a relatively open political sphere for Iranian civil and social forces, including teachers’ unions. Many of the unions that were under pressure before then found the opportunity to reorganize and resume their civil actions, such as meeting and negotiating with state officials, issuing statements regarding guild demands and demonstrating effectively in public.

Although some civil activists remained under pressure, the extent of pressure wasn’t as great. In some sectors, the government had even further relaxed its attitude toward civil activists. However, the US reintroduction of economic and political pressures has escalated internal tensions in Iran, and security forces have restricted protests by teachers’ unions. The US maximum pressure strategy, therefore, has disturbed the peaceful process of dialogue between Iranian civil society and the government and hindered gradual, indigenous development of civil organizations, particularly those for laborers and teachers.

The strategies of what Foreign Minister Mohammad Javad Zarif has called the US B-Team warmongers, although incapable of changing the Iranian government’s regional policies, have deprived Iranian civil activists of the relatively open air once provided by Rouhani’s administration.

Second, though teachers’ guilds in Iran date back to before the 1979 revolution, most teachers' and political guild organizations began their activities in the reform era (1997 to 2005). Teachers have organized effective actions for two decades.

During that time, their demands have varied. Although demands for raises sparked their collective actions, they gradually pursued qualitative goals such as higher levels of freedom for collective actions, additional educational facilities, modernized and safe schools, the right to free education for all, educational materials addressing citizenry and human rights and the integration of the teaching approaches of progressive educational systems such as Finland and Singapore.

But the new rounds of US sanctions have created unbearable pressures on Iranian wage earners, resulting in teachers pulling back from their demands for progressive education and focusing merely on financial demands. As a result, the government — which had begun pursuing a modernization program, is now pouring its resources into teacher salaries.

History indicates democracy can’t be imported. Previous US interventions in the region show that neither war nor political/economic pressure can institutionalize freedom, human rights or social welfare.

In contrast to Trump’s claims, democracy emerges from the development of free education, media and civil organizations and is consolidated through gradual domestic practices.

The ongoing crisis won’t lead to the ideals that Iranian society has fought for since the 1905 constitutional revolution. Conversely, it can sabotage neophyte democratic institutions and set the Iranian democratization process back decades.