Iran told a French envoy that it will continue to scale back its commitments under the nuclear deal unless the other signatories honor their end of the deal. 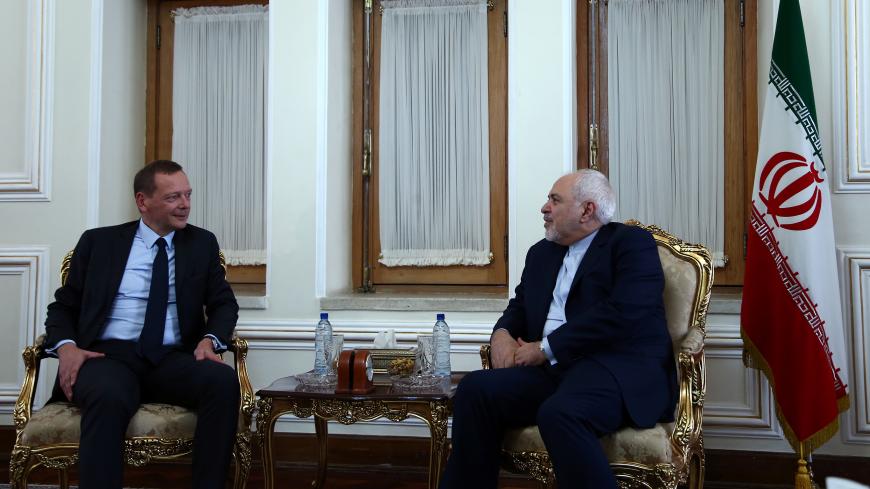 In a sign that Iran is sticking to its guns, one of the country's top officials told a visiting French envoy that Tehran will adhere to the phased process of abandoning the obligations it assumed under the landmark 2015 nuclear deal until "its rights promised by the agreement are fully materialized."

The meeting with Ali Shamkhani, the secretary of Iran's powerful Supreme National Security Council, is part of a two-day mission that French diplomat Emmanuel Bonne has been tasked with by President Emmanuel Macron.

According to Iranian media, Bonne is in Tehran to discuss with Iranian officials how European signatories of the Joint Comprehensive Plan of Action (JCPOA) could implement their obligations and explore ways of salvaging the pact, which has been in tatters ever since the United States withdrew from it last May.

"Iran will no longer unilaterally comply with the accord while the other sides refuse to honor their commitments," Shamkhani told Macron's aide. The Iranian official also downplayed the US "maximum pressure" campaign against his country as "a failed policy," adding that "language of force" will not work on Iran, which has demonstrated its "capacity in fighting off multiple challenges."

Ever since Iran announced its plans to scale back on nuclear commitments in response to what it perceives as inaction from European signatories, France has been in a diplomatic frenzy to keep the deal alive. President Macron was the only European leader to personally contact his Iranian counterpart after the Islamic Republic officially revealed that the level of its uranium enrichment had broken the cap placed on it by the JCPOA.

The official dispatched from Elysee Palace said Macron is seeking joint initiatives for a "cease-fire in the US economic war on Iran" to help de-escalate the situation in the region. But the roots of that escalation, according to the spokesman for Iran's Foreign Ministry, should be traced in the US Middle East policies. "We are not pinning hopes on anyone or any country. But the door to diplomacy remains open," Abbas Mousavi said of the French envoy's visit to Tehran. "If they [Europeans] are worried about the deal's fate, they can take practical steps … and not merely stick to photo opportunities."

In the meeting with Shamkhani, Macron's diplomatic adviser stressed that he was not there for mediation or to deliver a message from the Americans. Iranian media reported that the French envoy had also acknowledged Tehran's "proven power of resistance against 40 years of outside pressure" and that Iran's role in regional and international calculations had significantly grown.

During his phone conversation with President Hassan Rouhani of Iran, Macron proposed that the two sides contemplate fresh initiatives for negotiations in a week's time. Now, Rouhani is under fire by rival hard-liners for giving a green light to the offer. Ultraconservative paper Kayhan likened renegotiation to "driving on the reverse gear" and a "signal of weakness."

To those with moderate political leanings, however, France is trying to exercise its independence from the United States in foreign policy choices and is worried that Iran's phased breaches will eventually lead to a collapse of the JCPOA. Reformist daily Aftab-e-Yazd argued that Paris needs to save the JCPOA to maintain its enormous trade volume with Tehran.

Yet doubts continue to be cast over France's capacities and intention in its push to salvage a deal, which is by many standards on life support. Mizan, a news agency affiliated with the Iranian judiciary, said Paris "had a foot in both camps" and said its role was that of the "bad cop" that went the extra mile to sabotage the 2015 nuclear talks. The conservative outlet said the French government was an "untrustworthy" partner since it refuses to stop hosting annual conventions by the MEK, or Mujahedeen-e-Khalq — an opposition group that took up arms against the Islamic Republic in the aftermath of the 1979 revolution and remained on the US State Department's list of terrorist organizations until 2012.