While politicians in Tehran were seeking a new opening with the UK after Boris Johnson found his way to 10 Downing Street, Iran's media received the news with little enthusiasm. 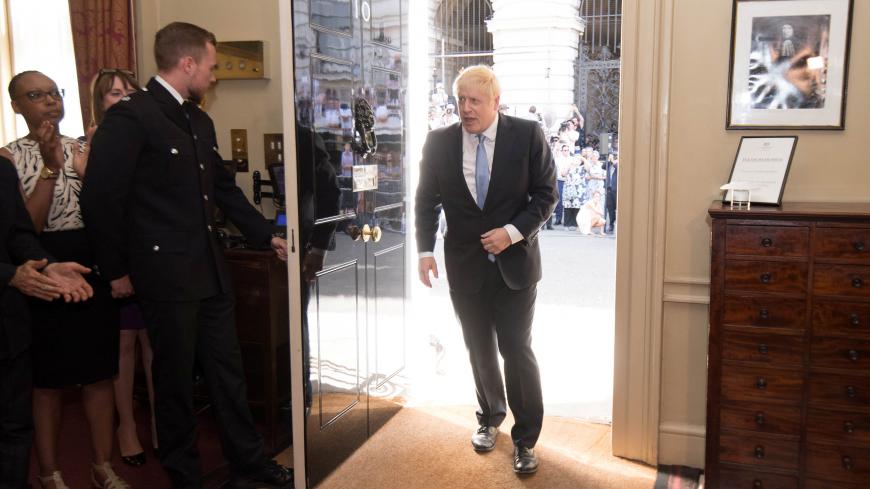 Iranian media outlets were inundated by editorials July 24 on how a Boris Johnson premiership would impact the already turbulent Tehran-London ties. Personal traits and foreign policy approaches that the incoming British prime minister shares with US President Donald Trump shaped the picture Iranian outlets painted of the new Tory leader.

"A new Trump in Europe," "The British Trump," "Trump's duplicate," "Trump reproduced in London" and "Trump's body double" were among a multitude of pejorative descriptions Iranian papers used to underline what they view as the threat of the new UK prime minister to international relations in general and the Islamic Republic in particular.

In a skeptical editorial, Etemad, which represents Iran's pro-engagement Reformist camp, called Johnson the "choice of the extremists." The paper claimed, however, that the new government will be "short-lived" only to be pushed aside by the Labour Party in a snap election. The same prediction was made by London-based former Iranian culture minister, Ata'ollah Mohajerani, who traced the roots of an anticipated collapse of the Tories in their Brexit ambitions.

According to Iranian media, a daunting foreign policy challenge the new British leader is facing, among others, is the ongoing oil tanker crisis, which has strained the UK-Iran relationship. Last week, a British oil tanker was seized by Iranian forces in the strategic Strait of Hormuz. London has called the move a tit-for-tat response by Tehran after an Iranian oil tanker was detained off the coast of Gibraltar over allegations that it was violating EU sanctions by shipping oil to Syria. Iran has denied the tanker was destined for Syria but has refused to identify the destination. It has also offered multiple reasons other than retaliation for the capture of the British tanker.

Unlike the overall negative reception Iranian media thrust upon Johnson's premiership, the country's politicians moved to ease the tensions. In a conciliatory tone, President Hassan Rouhani said the UK will be given a "proportionate response" if it released the Iranian vessel, suggesting that Tehran will do the same for the British tanker. Meanwhile, the head of the office of Iran's supreme leader revealed that London had sought mediation to resolve the crisis, but did not elaborate further. The ultraconservative paper Kayhan earlier quoted Arab media sources as saying that London "appealed" to Iraq's Prime Minister Adel Abdul Mahdi to help free the tanker.

Iran's Foreign Minister Mohammad Javad Zarif earlier expressed a willingness to try diplomacy. Zarif congratulated Johnson, his "former counterpart," and gave him assurances that "Iran does not seek confrontation." But Zarif also made it clear from the outset that Iran has "1,500 miles of Persian Gulf coastline. These are our waters and we will protect them."

In an optimistic message, Iran's Ambassador to London Hamid Baeidinejad also hoped that Johnson's "knowledge and experience" would defuse the UK-Iran tensions. "Apparently he is the sole PM in past [40 years] who has visited Iran and had a direct dialogue with its senior officials," he tweeted. That visit took place last December, when Johnson's mission as the UK foreign secretary to secure the release of British-Iranian national Nazanin Zaghari-Ratcliffe proved impossible. Zaghari-Ratcliffe is serving a five-year sentence at Tehran's notorious Evin prison over espionage charges. After erroneously stating that the 40-year-old mother had been teaching journalism in Iran, Johnson triggered a massive backlash at home from those who noted that the comment exacerbated her ordeal in captivity.

Given the historical complexities in Iran-UK ties, the direction of future relations might be hard to discern. But Johnson's premiership has already opened up a heated debate among Iranians. Some are drawing a bleak picture, in which Johnson will follow the Trump model and depart from the fragile Iran nuclear deal to appease the like-minded US president. But exulting in the capture of the UK oil tanker as a "turning point" in the history of the Islamic Republic, hard-liners argue that Tehran is now in a position of strength, with a valuable bargaining chip to use against a Tory government entangled in multiple foreign policy battles, on top of them a hard Brexit.