After the seizure of a Syria-bound Iranian oil tanker by British Royal Marines off the coast of Gibraltar, Iran's hard-liners are pressing the Rouhani government to drop diplomatic efforts and instead "respond in kind" by holding UK vessels in the strategic Strait of Hormuz. 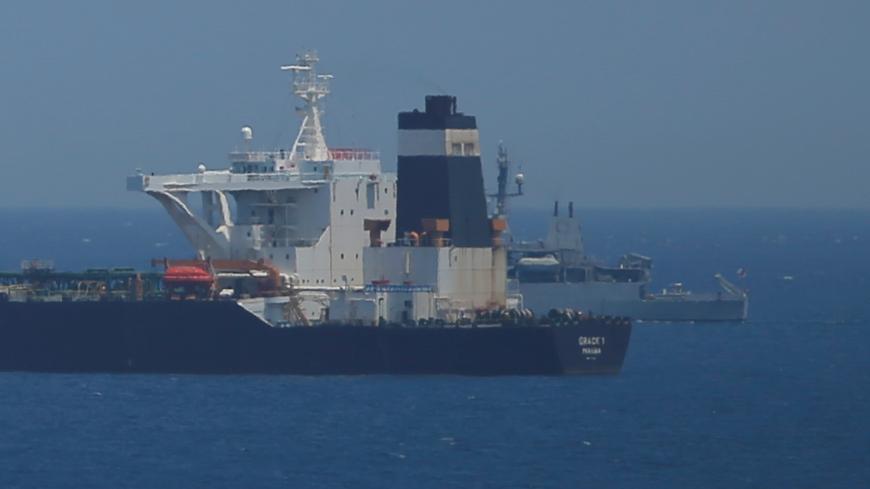 A British Royal Navy patrol vessel guards the oil supertanker Grace 1 that is under suspicion of carrying Iranian crude oil to Syria, as it sits anchored in waters of the British overseas territory of Gibraltar, historically claimed by Spain, July 4, 2019. - REUTERS/Jon Nazca

Calls are growing from Iran's hard-liners for reciprocal action against the United Kingdom's seizure of an Iranian oil tanker. Last week, British marines off the coast of Gibraltar detained the supertanker — which was carrying 2 million barrels of crude to Syria — after it was found in breach of EU sanctions on exports of oil to the Syrian government.

The incident continues to draw the ire of Iranian authorities, who have called it an illegal move amounting to an act of "piracy." The Iranian Foreign Ministry has already grilled the UK ambassador in Tehran, expressing an official protest and demanding the immediate release of the vessel.

Foreign Minister Mohammad Javad Zarif, known for his intense Twitter diplomacy, lashed out at the decision by challenging it from a legal point of view. "Iran is neither a member of the EU nor subject to any European oil embargo," he wrote, suggesting that Tehran is not obliged to comply with EU sanctions on Syria. "Last I checked, [the] EU was against extraterritoriality," he tweeted in his characteristic wry tone. Zarif also warned that the act of "piracy" set a "dangerous precedent" and urged an immediate end to it.

That, however, did little to appease his relentless hard-line critics at home, who are rarely content with the moderate government's approach toward the West. The proper response to the "UK's insolence," according to ultraconservative Kayhan — which has close links to the office of Iran's supreme leader — should be sought in the form of "reciprocal action" rather than summoning the UK ambassador or posts on Twitter. Kayhan argued that a seizure of British tankers and vessels in the strategic Strait of Hormuz is the "legitimate right" reserved by the Islamic Republic: "The Iranian public expects a response in kind that would teach the UK a lesson … one that makes it regret the move." Kayhan did not elaborate on whether that "expectation" was based on an opinion poll.

A similar suggestion was echoed elsewhere in a piece written by Mansour Haghighatpour, an ultraconservative pundit and former lawmaker: "The British have always stood on the frontline of antagonism against the Islamic Republic and have never spared any malign conduct against Iran. … But Iran has every capacity to inflict considerable harm upon British maritime transit in the Persian Gulf." Iran's option, he noted, will be the seizure of UK oil tankers "if London continues to play into the hands of Washington and refuses to stop playing with fire."

The men in uniform have also issued warnings of their own but have kept them as vague as possible. "Iran will consider responding … in the appropriate time and place," said Maj. Gen. Mohammad Hossein Bagheri, chief of staff for the armed forces of the Islamic Republic. In an equally guarded reaction, Defense Minister Amir Hatami earlier declared that the UK capture of the Iranian tanker "will not go unanswered."

Yet the first open call for retaliation came from Mohsen Rezaei, a former commander of the Islamic Revolutionary Guard Corps who now serves as secretary of the Expediency Council. "If the UK refuses to release the Iranian tanker, it is incumbent upon the [Iranian] authorities to respond in kind by detaining a British oil tanker," he wrote on Twitter, sparking fury from users who accused him of offering imprudent proposals every now and then.

Aside from political implications brought about by the Gibraltar drama, every barrel of seized crude could count for an Iranian government already feeling the burden of slashed oil revenues due to the US "maximum pressure" campaign. Still, despite pushes from hard-liners, President Hassan Rouhani's government seems to be exercising caution to avoid moves with indiscernible consequences that could further escalate the already tense circumstances in the Persian Gulf.