Despite a truce understanding, tension is still high on the border between the Gaza Strip and Israel. 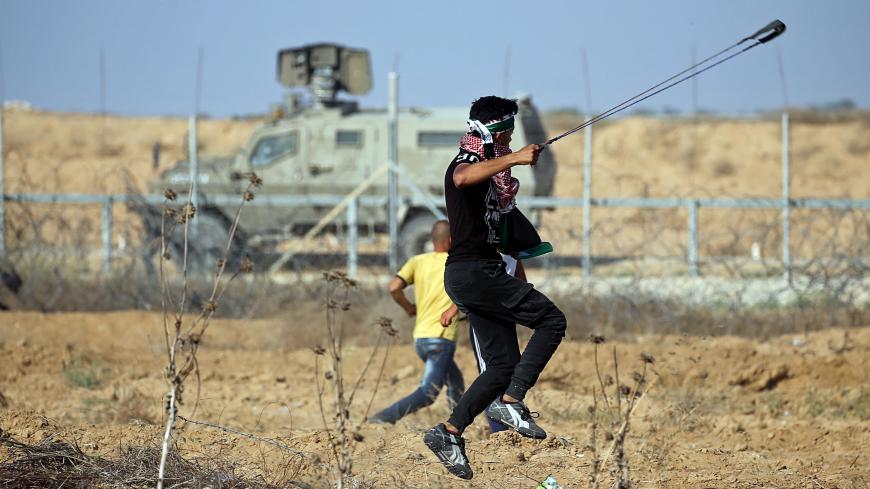 A Palestinian demonstrator uses a sling to hurl stones at Israeli forces during a protest at the Israel-Gaza border fence, in the southern Gaza Strip, June 21, 2019. - REUTERS/Ibraheem Abu Mustafa

GAZA CITY, Gaza Strip — Tension between Israelis and Palestinians continue to threaten the fragile truce reached between the two sides under UN and Egyptian mediation in May.

The July 7 news about new trade measures and an industrial zone in Gaza as part of the understandings was preceded by threats to escalate incendiary balloon attacks on Israeli settlers living in the Gaza envelope. On June 27, a youth movement known as the Jihadist al-Barq Unit said it will continue to send balloons across the Gaza border fence. Meanwhile, Israel has threatened to launch a rocket for every incendiary balloon that reaches its territories.

Despite the flare-up, Israel has approved a series of new measures for the Gaza Strip, Makan revealed July 5. The measures, which come as part of the truce understandings with Hamas, include the entry of new materials to the Gaza Strip that were previously banned. Under the new measures, steel cables — used to build large fishing boats and banned for alleged use in tunnel construction — agricultural fertilizers, iron doors and aluminum household appliances will now be allowed into Gaza.

In late June, Israel has also allowed the entry of fuel to operate Gaza’s only power plant. The move has increased production capacity after Gaza had suffered more than 10 hours of power outages per day throughout the month of June.

Rami, a trader from Gaza who asked that only his first name be used, told Al-Monitor he had to hire a lawyer to collect the money shop owners in Gaza owed him. The trader said some of it was years overdue, but he realizes how difficult his lawyer's task is. “The trade situation in Gaza is getting worse by the day. A large number of merchants went out of business after losing their money, while others left Gaza. We will not be able to collect our money."

Rami explained that nearly 90% of the accessories and chocolates he brings into the Strip through Israeli crossings are sold at cost amid the salary crisis facing Gaza’s government employees.

Spokesman for the Islamic Jihad movement Musab al-Barim did not deny that the political situation in Gaza is unstable. “The Palestinian resistance’s will to fight will prevail over Israel’s insolence and abuse. This is made clear in our political discourse as well as in the messages we sent to the Egyptians who are mediating to break the Israeli siege,” he said, continuing, “There is no turning back. We cannot allow the Israelis to enjoy calm at the expense of the Palestinians’ rights, and we cannot allow them to evade their commitments that were agreed upon to lift the siege on Gaza.”

Hamas spokesman Hazem Qassem told Al-Monitor that the waning of the border protests was a deliberate decision by the High Committee of the Great Return March and Breaking the Siege “to bring civilian casualties to zero and stop the Israeli forces from shedding the blood of Palestinians.”

Asked whether the loss of momentum is linked to the truce agreement, Qassem told Al-Monitor, “The Palestinian factions are committed to the Egyptian-brokered cease-fire agreement of 2014. They have never violated it. The Israeli forces are the ones who lag behind in fulfilling what is required of them, which puts all understandings in danger.”

Qassem emphasized that Hamas does not seek to enter battle with Israel. “But if this battle happens to take place, it is ready to defend the Palestinians.”

Political analyst Talal Okal told Al-Monitor, “Israelis have not complied with the terms of the truce, not even once. The Palestinians, who want it to start lifting the siege on the Gaza Strip, are escalating the situation by launching incendiary balloons and resorting to other means of pressure to force it to meet its commitments.”

Okal, who does not expect Israel and Hamas to engage a military battle in the near future, believes, “The main problem preventing the expansion of these truce agreements is the issue of prisoners exchange. If that happens, I think it will lead to a preconditioned truce, meaning Israel will accept Hamas’ terms — and these include allowing the Qatari grant to be disbursed in Gaza to pay the civil servants’ salaries, allowing the entry of fuel and opening the crossings, among other things.”

Okal concluded, “Israel will keep trying to isolate the Gaza Strip, and thus will keep fueling the internal Palestinian division. Only after it achieves this may Israel start to relieve the pressure on the Gaza Strip.”