Palestinians in Gaza have been trying to sleep through the roar of Israeli jets and bombs, as Israeli settlers wake up to the explosions of grenades in a pseudo-war that might change the rules of engagement. 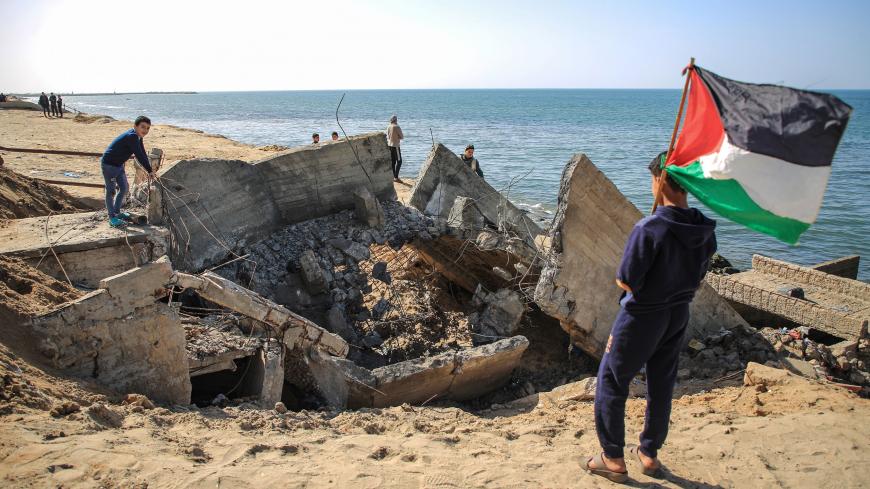 GAZA CITY, Gaza Strip — The Israeli army continued bombing Hamas targets this week in the Gaza Strip, which army spokesman Avichai Edrei said comes in response to rockets and incendiary balloons being launched from the Gaza Strip toward Israel.

Israel's retaliation for earlier volleys included authorities' decision Feb. 2 to keep cement from entering the Gaza Strip and reduce the number of Gaza merchants allowed to enter Israel. On Feb. 5, Israel decided to reduce the fishing zone in the Gaza Strip from 15 nautical miles to 10.

Hamas — which rules the Gaza Strip and concluded truce agreements in March 2019 with Israel under Egyptian sponsorship — said the current escalation stems from public anger at Israel's lack of commitment to the truce understandings, and expresses Palestinians' rejection of the US peace plan announced Jan. 28. Yet Hamas has refrained from making any statements about the escalation. Al-Monitor tried to contact Hamas spokesman Hazem Qassem to ask about the movement’s silence, but to no avail.

Talal Okal, a political analyst and writer for the West Bank-based newspaper al-Ayyam, told Al-Monitor Israel is leading this escalation with the aim of forcing the Gaza Strip into a calm-in-exchange-for-calm equation. But, he wonders, if Palestinians halted their marches and aborted the violence in exchange for Israeli incentives, then what are they expected to do when Israel revokes the incentives?

Asked about Hamas’ silence regarding the current escalation, Okal said Hamas is in a quandary in Gaza, especially as the marches resulted in thousands of wounded and hundreds of dead but failed to achieve any tangible results.

“This is pure failure, a kind of surrender to Israel," he said.

Okal also noted that, as Israel's March 2 general elections approach, its escalation — though limited — aims to demonstrate to voters that it can deter any attacks and protect its people.

At the same time, Israel's unsettled political situation might be contributing to its limited response to the escalation. Tayseer Mohsen, a political science professor at Al-Azhar University in Gaza, told Al-Monitor, “This politically unresolved period on the Israeli side does not give anyone the freedom to decide to wage war."

Hassan Abdo, a political analyst close to the Palestinian Islamic Jihad, told Al-Monitor Israeli drones are constantly hovering over Gaza looking for a target, to drag Gaza into a limited wave of escalation that would allow Netanyahu to gain votes in the upcoming elections. The factions in Gaza are responding with minimal doses of rockets that hardly cross the border.

Ibrahim al-Madhoun, a political analyst close to Hamas, told Al-Monitor, “The Palestinian factions in Gaza are trying to express their anger at Israel’s failure to implement the understandings" and at the US peace plan, and they feel helpless in the face of young Palestinians' anger. It's hard to know if Hamas is even giving the go-ahead for the use of rockets and incendiary balloons coming from the Gaza Strip, though it is likely, he said.

“I think Hamas indirectly approves of whatever is coming out of Gaza. In addition to its military ability to control the field, there is no doubt that the movement should be able to logically persuade the factions to stop firing shells, which up until now have been based on individual actions,” he added.

As for Israel's failure to comply with the truce understandings, Okal said Israel often doesn't commit to its agreements. Netanyahu fears that if he commits to the truce, he could be perceived as weak or as caving in to pressure — especially as he is already criticized heavily whenever Gaza concessions are involved.

Mohsen said, “The Israelis only accepted the truce understandings because they were under pressure, and as soon as calm returned, they reneged on what was agreed upon.” He said Palestinians should continue to place pressure on Israel through mediators. He expected Israel to soon reverse its decisions regarding traders, cement and the fishing zone, for fear the situation in Gaza would deteriorate to the point of affecting Israel negatively.

Madhoun pointed out that Israel is still not good at dealing with Hamas and is trying to pressure it. This could result in four scenarios, he said: The situation remains unchanged; things escalate a bit more; a wide military confrontation ensues; or the nearly 13-year siege on the Gaza Strip is lifted and a long-term calm prevails.