Turkish diplomats swept up in wave of arrests report torture

Evidence is piling up that many of the dozens of former Turkish diplomats recently rounded up and jailed were tortured, and the timing of the crackdown has raised speculation that the government is attempting to intimidate purged officials. 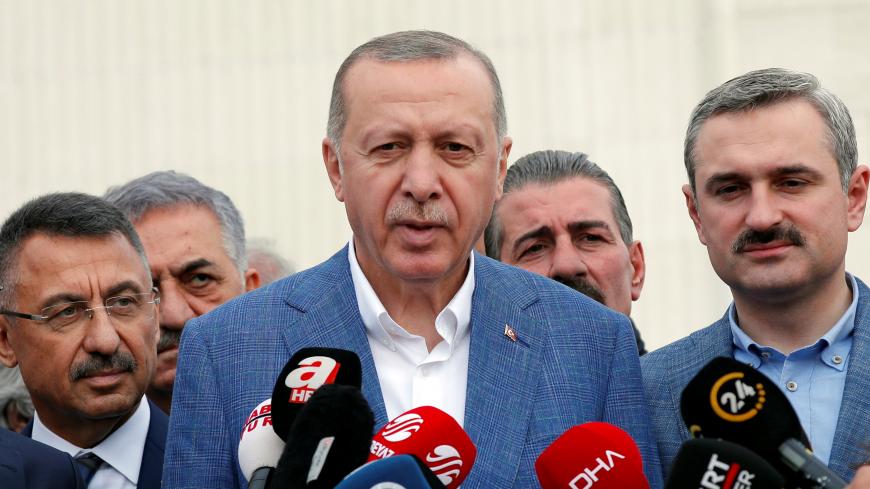 Turkish President Recep Tayyip Erdogan talks to the press after the Eid al-Fitr prayers to mark the end of the holy month of Ramadan in Istanbul, Turkey, June 4, 2019. - REUTERS/Murad Sezer

At least 27 former Turkish diplomats, including one woman, have been arrested as suspects in an alleged conspiracy amid mounting evidence that many of them were tortured and threatened with rape.

The arrests follow the mass detention on May 20 of around 110 former diplomats accused of cheating on the Foreign Ministry’s entrance exams with help from an Islamic fraternity that used to be allied with the government and is now classified as a terror organization known as the "Fethullah Gulen Terror Organization" or FETO.

The timing of the former diplomats’ arrests has raised questions about the government’s motives and there is speculation that the real target may be former Turkish Prime Minister Ahmet Davutoglu. Some believe it's an attempt to intimidate purged officials into not seeking redress.

Most of the detainees joined the ministry between 2009 and 2014, when Davutoglu was at its helm, implementing his ill-fated “zero problems with neighbors” policy. He succeeded Erdogan both as prime minister and as chairman of their ruling Justice and Development Party (AKP) when the latter became president. But Davutoglu was unceremoniously booted out in 2016 amid claims that he was looking to steal the party from Erdogan.

The former political science professor is currently in the process of forming a new party that casts itself as an alternative to Erdogan’s AKP.

Since losing Istanbul and Ankara to the opposition in the March 31 local elections, Erdogan has begun to look increasingly vulnerable but no less ruthless when its comes to self-preservation. A rerun of the Istanbul polls are being held on June 23 after the country’s election watchdog succumbed to the AKP's skimpily evidenced claims of irregularity.

One of the former diplomats who was among those freed agrees that erecting a conspiracy case against the diplomats could conceivably allow authorities to implicate Davutoglu as its mastermind, and by extension a FETO operative, thus nipping his party plans in the bud.

The man, who spoke on condition that he not be identified by name for fear of retribution, told Al-Monitor in a telephone interview, “They did not touch us for three years; it was totally unexpected.”

In the years since the abortive putsch, at least 130,000 government officials have been purged and over 90,000 others jailed, most for their alleged membership of FETO and often on scanty evidence, rights groups say. They include around 550 Foreign Ministry personnel summarily fired under Emergency Decree 672 issued on Sept. 1, 2016.

Like many of his colleagues, the former diplomat was serving in a European capital when he was ordered back home without time to pack his belongings. He had never been to any Gulen-linked schools — attendance is held up as “proof” in FETO prosecutions — and insists he has no connection to the movement, but that it was an open secret in the ministry that Gulen’s followers were among the staff.

He has been seeking redress ever since, lodging appeals with an official commission established to hear such cases and with the Constitutional Court. He had joined the foreign service 2010. “Why did they suddenly decide we had cheated on our exams so long after the fact?” he asked.

Whatever the reason, nothing prepared the detainees for the ordeal that ensued.

Another of the men who was freed described a colleague who had passed out after returning from his interrogation. He told Al-Monitor in a telephone interview, “I am speaking on his behalf, on behalf of all my innocent colleagues. I want the world to know.”

The former diplomat, who was assigned to a Middle Eastern country when he was fired, said, “Our colleague told us that they they had taken him to a dark room, put a sack over his head, then forced him to remove all his clothes. He was then made to crawl on all fours. When he refused to confess, they forced him to kneel in the fetal position. His interrogators then poured lubricant on his anal area and began probing it with a truncheon. They threatened to rape him if he did not admit his guilt. He told us this. It's not secondhand.”

His account matched testimonies of six victims interviewed by the Ankara Bar Association, one of Turkey's few remaining independent legal bodies, which published its findings in a report.

The Turkish Foreign Ministry did not respond to Al-Monitor’s request for comment.

Both of the purged diplomats denied that they had cheated on their exams, saying they could not have do so even if they had tried.

A retired Turkish ambassador who served as an examiner during Davutoglu’s tenure concurred that it would be extremely difficult, if not impossible to cheat on the entrance tests. Speaking on condition that he not be identified, the ex-envoy said, “Our board of examiners determines the questions on the same day of the exam precisely to prevent any mischief.”

The only opportunity for tampering, he noted, would be after the written exams are completed and handed in. “But the window is really too narrow,” he said.

Yasar Yakis, a former ambassador who was foreign minister when the AKP first came to power in 2002, said there was little doubt that Gulen loyalists had entered the Foreign Ministry over the past decade, just as they had other key government institutions. “Certain turns of phrase used in common by many of those who sat Foreign Ministry exams during that period suggests that cheating may have occurred,” Yakis told Al-Monitor, citing the government’s claims against the purged diplomats.

But much of that language is on the Turkish Foreign Ministry's website, where aspiring diplomats typically turn when swatting for the tests. The former diplomat who was yanked from the Middle East said his interrogator asked him why he had used the expression, “Turkey attaches importance to” in his essay. The phrase apparently inculpated him and many others in that year’s intake. “It's ridiculous, the whole case against us is a joke,” he said.

That is not to say that a substantial number of Gulen sympathizers did not join the ministry’s ranks — probably on their own merits. Several of the purged diplomats boast Harvard degrees.

The Foreign Ministry had long been the preserve of a small privately educated elite, mostly graduates from Ankara’s prestigious political science college, the Mulkiye. Proficiency in either English or French was a must. It was Turkey’s finest if haughtiest government institution.

But in 1999, leftist Prime Minister Bulent Ecevit changed the rules for joining the government service. Anyone who passed a national test known as the KPSS was eligible to join, opening the government’s doors to the long-scorned Anatolian underclass.

The Gulenists, long commended for the high quality of the education in their now shuttered schools, exploited the change, steadily expanding their influence in the ranks of the bureaucracy.

Erdogan’s rise to power gave them a big boost as Gulen and the AKP joined forces to defang their common enemy, the Turkish General Staff. Graduates from Davutoglu’s alma mater Bosphorus University were admitted to the Foreign Ministry in growing numbers, as were others from Ankara’s Bilkent and Middle East Technical University. The Mulkiye’s monopoly was shattered.

The former retired ambassador said that while the system became more merit based, the quality of new diplomats began to fall. “Their foreign language skills were not up to par.”

In April 2016, some 95 diplomats of a total 111 failed a test to be promoted to the rank of first secretary, a make-or-break moment in any Turkish diplomat’s career. Their poor language scores were cited. But the purged diplomats insist that year’s exam was made deliberately hard to prevent their rise.

In 2014, as the power struggle between Gulen and Erdogan escalated, the Foreign Ministry switched back to the old rules for entry. But with Turkey's best and brightest leaving the country in droves, it's unlikely the once proud institution will recover its former glory anytime soon.