Ruling party officials have adopted the Kurdish issue as a campaign strategy in the upcoming Istanbul elections. 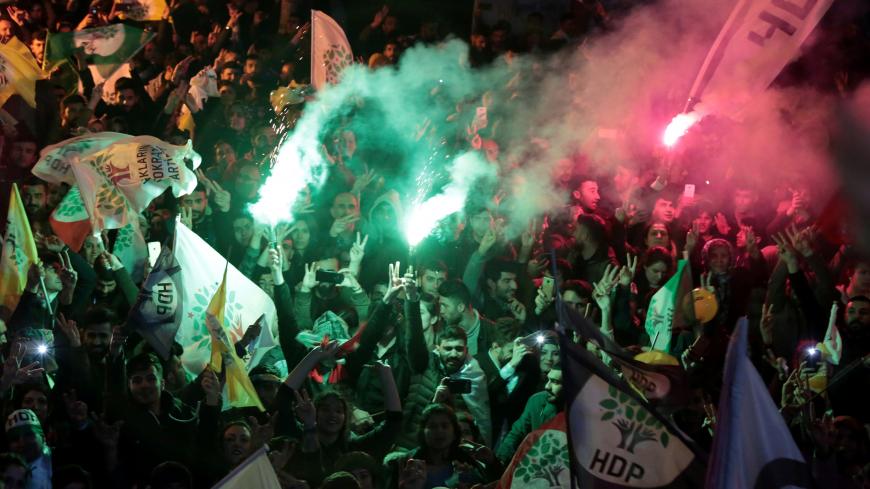 Residents of Istanbul will once again head to the polls on June 23 to vote for the mayor of their city, Turkey’s commercial capital and where Erdogan rose to power after his unexpected mayoral win in 1994. Since then, Erdogan has remained virtually undefeated electorally, save for a major defeat in the June 2015 elections, when his party lost the parliamentary majority needed to form a government on its own. Yet Erdogan didn't concede and forced an election repeat. Five months later, the ruling Justice and Development Party (AKP) won back its parliamentary majority and kicked off Erdogan’s steady march toward one-man rule.

Back then, the defeat was due to Kurdish votes going to the pro-Kurdish Peoples’ Democratic Party (HDP). For the AKP, now is the time to woo the Kurdish vote in Istanbul before the critical rerun, as HDP voters constitute some 10% of total voters in Istanbul. The HDP didn’t nominate any candidate for the March 31 race and instead supported the opposition bloc's candidate, Ekrem Imamoglu.

In response to this state of affairs, the AKP has adopted a new strategy for the election rerun that has three important pillars.

First, Erdogan, an indefatigable campaigner who, before the March 31 elections, had demonized the Kurds, took a step back from his hateful rhetoric.

Second, the AKP mayoral candidate Binali Yildirim has adopted pandering language toward the Kurds to curry their favor. Although he is running in the Istanbul race, he rallied in the mainly Kurdish province of Diyarbakir, known as the Kurds’ capital. In his speech he openly uttered the word “Kurdistan.” Had someone from the opposition said "Kurdistan," he or she would have been charged with "supporting terrorism." Only two months ago Erdogan declared that there is no “Kurdistan” in Turkey and that those who want to call it such should leave Turkey and settle in Iraq.

Third, the AKP hinted that new peace talks with the outlawed Kurdistan Workers Party (PKK) could be initiated after the Istanbul rerun. To heighten expectations, concrete steps were taken, such as improving prison conditions for PKK leader Abdullah Ocalan.

The Kurdish problem has once again made headlines in Turkish politics ahead of the Istanbul vote.

In the meantime, Interior Minister Suleyman Soylu, unlike Erdogan, has not backed off the anti-Kurdish rhetoric. Soylu is fiercely anti-Kurdish and speaks almost every day in a passionate, polemical way. He doesn't hesitate to use provocative anti-Kurdish language against Imamoglu for having close ties with the HDP.

Defense Minister Hulusi Akar is currently engaged in a military campaign against Kurdish militants in Iraqi Kurdistan. He said the Turkish army's recent ground and air offensive is “the most significant offensive Turkey has mounted against the PKK since at least last summer.”

How then should one read all these conflicting signals with regard to the Kurdish issue? Perhaps one must look toward the never-ending struggle within the Turkish security establishment on how to deal with the Kurdish question.

“Certain circles within the state apparatus are deliberately trying to scuttle the steps directed to resolve the Kurdish issue,” wrote Nagehan Alci, a pro-Erdogan columnist. She claimed that Soylu's actions are an attempt at “politically assassinating Binali Yildirim.” Alci's column illustrates the prevailing confusion in the ruling party, and mainly in the state apparatus, concerning the Kurdish issue.

The Kurdish issue not only shapes Turkey's domestic politics, it is also a stumbling block for Turkish-US relations. The predicament is in northern Syria, where US envoy James Jeffrey is trying to reach a deal between Turkey and the Kurdish groups that control the region.

Al-Monitor reported that Jeffrey, speaking at the Middle East Institute recently, "said that the United States, Turkey and the [Syrian Democratic Forces] had ‘a general agreement in principle on the pullback and on the safe zone,’ adding that the United States thought the talks had 'a real chance.'"

The report continued, "Jeffrey said that several sticking points remained to clinching a deal. These include how much territory the [People's Protection Units are] being asked to give up, dealing with US-provided weapons left over from the counter-[Islamic State] campaign and clarifying governance in the safe zone."

Neither Turkey nor the Kurds reacted to Jeffrey’s statement. The reason is apparent: The situation is inconclusive, and there is no tangible progress. All the previous sticking points that preclude a deal are still present. There is no reason to conclude that there is a chance to revive the Kurdish peace process, which was terminated in July 2015, through American efforts in northeastern Syria.

More noteworthy is a letter from acting Secretary of Defense Patrick Shanahan to his Turkish counterpart. Shanahan issued an ultimatum, giving Turkey until the end of July to decide if it will go ahead with its purchase of Russian anti-aircraft missile systems, or else face US sanctions.

While Erdogan cannot — and does not want to — expect an American contribution for a revival of the peace process with the Kurds, the HDP’s constituency in Istanbul is not impressed by Yildirim's pre-election tactical moves. They will most likely vote for Imamoglu.

If Imamoglu wins (again) thanks to the Kurdish vote, it would be a victory that would tip the political balance against Erdogan. In that case, any reconciliation between the Kurds and an anti-Kurdish nationalist Turkish government would be a pipe dream.