The Tunisian parliament has approved controversial amendments to the electoral law that could exclude candidates for the presidential and legislative elections at the end of 2019. 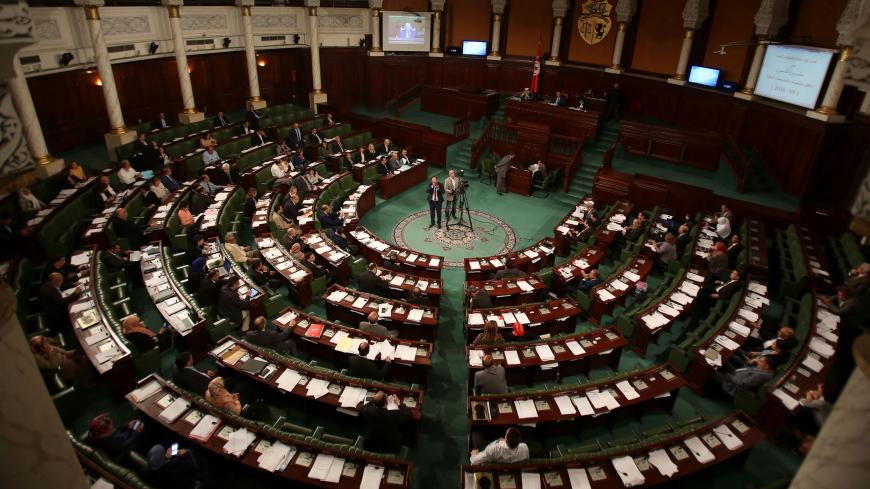 A general view shows the Assembly of the Representatives of the People in Tunis, Tunisia, May 10, 2016. - REUTERS/Zoubeir Souissi

That candidate's chances, however, may have already dimmed considerably, as he was recently charged with money laundering.

The 217-seat parliament approved the constitutional amendments June 18, with 128 of the members present voting in favor of the changes, 30 rejecting them and 14 abstaining. But just days later, 51 members challenged the decision. On July 8, the country's Provisional Authority, which determines the constitutionality of laws, rejected the challenge.

Mustafa Ben Ahmed, a leader of the secular Long Live Tunisia party, told Al-Monitor, “The [amended] electoral law aims to improve the transparency of elections by regulating political advertising and charitable works intended to fool people into casting their votes.”

But some observers say the amendment targets certain popular candidates, especially recent front-runner Nabil Karoui, though that may be the least of his worries now. Last week, the government's financial judiciary department announced the media magnate has been charged with money laundering. His assets were frozen and he is forbidden to travel abroad. He has been under investigation for two years, since the anti-corruption group IWatch, a nongovernmental organization, accused him of tax evasion in 2017.

Adding to his troubles, the amendments impose new conditions on candidates. They state that any candidate who has benefited from political advertising through a charity or TV channel shall be banned from running in the elections. They prohibit candidates from distributing direct aid to citizens or from exploiting political advertising.

Karoui announced his candidacy in late May in an interview broadcast live on his private TV channel Nessma, the same channel that has boasted of his charitable work in marginalized areas of the country.

The amendments also require a candidate to prove that his or her legal record is clean.

In his first comment on the amendments, on June 18, Karoui wrote on his official Facebook page, “The [ruling] system refused to prevent 'partisan tourism' and electoral fraud and rather voted in favor of excluding [candidates], against the constitution and against the norms.”

Partisan tourism — a prevalent phenomenon in Tunisian politics — occurs when members of parliament keep changing parties or splitting from their original party to form a new one.

In a video he posted the next day on Facebook, Karoui said that he would run in the upcoming presidential elections despite the amendments.

Responding to Karoui's criticism of the amended law, Ahmed of the Long Live Tunisia party said, “Karoui … ought to settle his debts and pay his taxes before thinking about running for president.”

Al-Monitor contacted another critic of the amendments. Salem Ben Hassen, president of the grassroots citizen’s movement 3ich Tounsi (Live Tunisian), said his group is also a target of the amendments, which say a legislative party must receive at least 3% of the overall vote to have representation in parliament.

Ruling parties, such as Ennahda and Prime Minister Youssef Chahed’s Long Live Tunisia, try to obstruct their rivals,” he said. “This comes after the decline in their popularity among voters against the rise of other figures in opinion polls conducted in June and published by the Tunisian polling agency Sigma Conseil.

Ennahda parliament member Sami al-Fatanasi told Al-Monitor, “The parliamentary majority … approved the amendment of the electoral law to address political advertisement publicity and financial corruption and prevent the exploitation of people’s feelings through charity works. Ennahda refuses any exploitation of poverty for political and electoral purposes.”

Speaking to Al-Monitor, Adel Brinsi, a member of the Independent Electoral Commission, said the commission will comply with all parliamentary decisions concerning the amendments and will deal with them as binding once they are published in the Official Gazette of the Tunisian Republic.

The next legislative elections are set for Oct. 6. The first round of presidential elections is scheduled for Nov. 10, with the second round, if necessary, held two weeks after the first-round results are announced.