The Defense Department says in a new strategy that it has pressed the United Arab Emirates to investigate allegations of torture in Yemeni detention centers. 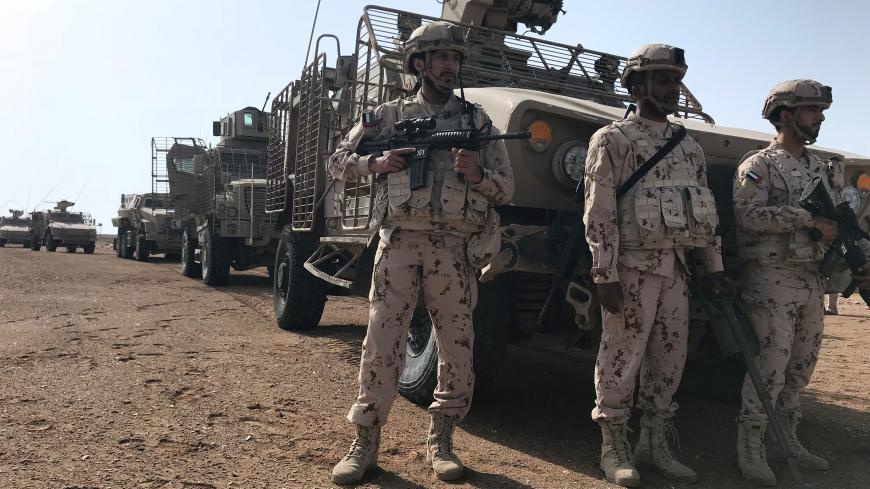 The Donald Trump administration is calling on the United Arab Emirates to allow independent monitors to probe alleged incidents of torture in detention facilities in Yemen, just months after the Pentagon insisted that it had no evidence of detainee abuse.

In a joint March report to Congress on US strategy in Yemen seen by Al-Monitor, the State and Defense departments and the US Agency for International Development said the United States had “raised serious concern with the UAE” over the alleged abuse and “urged them to conduct a thorough investigation and allow access for independent monitors.”

Cmdr. Rebecca Rebarich, a Pentagon spokeswoman, told Al-Monitor on Tuesday that senior Defense Department officials raised the allegations with Emirati counterparts before submitting a separate report to Congress about the alleged abuses in December. In that report, the Pentagon said it had not found “credible information indicating that US allies or partners have abused detainees in Yemen.”

The US pressure follows mounting evidence of torture and abuse in UAE-run prisons from the United Nations and human rights groups.

In July, Yemen Interior Minister Ahmed al-Maysari demanded that the UAE close secret detention facilities in southern Yemen, where The Associated Press reported that hundreds of prisoners had suffered sexual abuses. The UN-backed Group of Experts said in December that UAE-backed units raped, beaten and shocked prisoners and had hung detainees upside down. The UAE has reportedly barred independent monitors from accessing the jails.

Lawmakers who have called for an end to American support to the Saudi-led coalition gave the US administration credit for raising the allegations.

“I’m encouraged by the report that the Trump administration raised concerns with the UAE regarding the torture prisons in Yemen," Rep. Ro Khanna, D-Ca., who called for the Department of Defense to probe torture allegations last year, told Al-Monitor in a statement. "The US must never condone or be associated with torture and we must hold our partners and allies to the same standard. I hope the administration makes it clear to the Emiratis that this conduct is unacceptable and must stop immediately.”

In the March strategy shared with Congress, the Trump administration called Saudi Arabia and the UAE “strong US counterterrorism partners” in the fight against al-Qaeda and the Islamic State in Yemen. The document also reveals that the United States provided support to the UAE for “several successful counterterrorism operations” in Yemen’s Shabwah and Hadramawt provinces over the past two years.

Still, advocates against US involvement in the Yemen campaign have little faith that the United States will apply more significant pressure to stop the reported abuses.

“You can forgive my skepticism that the Trump administration or the Pentagon is actually applying any real pressure on the UAE over detention-related abuses, as it claims in this report to have done,” said a former US official, speaking not for attribution. "UAE stonewalling to date does not give much hope that they will allow access for independent investigators, including the UN Group of Experts, so that the truth about these abuses can be even further exposed, absent real US pressure to do so.”

The report comes on the heels of the Trump administration failing to comply with a series of requests from Congress to explain US involvement in Yemen, including the State Department’s refusal in February to say whether the Saudi-led coalition had cut down on civilian casualties in its four-year intervention against the rebel Houthis.

The administration said in the March strategy that rising civilian casualties had a “negative impact … on our ability to resolve the conflict.” But experts who spoke to Al-Monitor largely criticized the report, which outlines objectives to resolve Yemen’s civil war and humanitarian crisis, degrade terrorist actors and counter Iran, saying it did little to clarify how the US would help to achieve peace.

“What’s most interesting is that they don’t have a strategy,” said Andrew Miller, a former National Security Council director during the Barack Obama administration. “This is another instance in which the administration has fulfilled the letter of the law but evaded the spirit by not showing how they plan to achieve these objectives.”

The US administration also appears increasingly worried about Yemen breaking up as a result of the war. The UAE supports the secessionist Southern Transitional Council.

“Any fracturing of the country into separate states, especially along pre-1990 borders, is likely to separate the majority of Yemen’s population from the country’s energy resources in a way that sets the conditions for perpetual conflict,” the report said.

Yet the fresh strategy is expected to do little to stop congressional anger over US involvement in the Saudi-led campaign against the Houthis.

On Tuesday, a bipartisan group led by the Senate Foreign Relations Committee’s top Democrat, Bob Menendez, D-N.J. and Trump ally Lindsey Graham, R-S.C.., said they planned to introduce 22 resolutions of disapproval to give lawmakers the ability to review $8 billion in arms sales to the region. The Trump administration declared an emergency with regard to Iran last month in order to bypass Congress on arms sales to Saudi Arabia, the UAE and Jordan.

Following a February CNN report that the Saudi-led coalition gave US-provided arms to al-Qaeda and other militant groups, members and staff are becoming increasingly wary of Saudi Arabia and the UAE’s effectiveness in fighting terror.

"It was just another piece of evidence that they don’t share our values on human rights and [aren't] partners that we can trust," the House aide told Al-Monitor. "For them to be actively helping terrorists who we are supposedly trying to defeat was just sort of unbelievable."

A closed-door briefing with the full Senate by Secretary of State Mike Pompeo and Acting Secretary of Defense Patrick Shanahan in late May did little to convince lawmakers of the need for the additional arms.

“They said nothing about an emergency that would justify going around Congress for arms sales,” an aide to 2020 presidential candidate Bernie Sanders, I-Vt., told Al-Monitor. “If the situation was so serious in Yemen or elsewhere such that it would require that step, it seems like when you were briefing the Senate you might have mentioned that.” The aide said it was just the usual situation where Iran has taken steps that the administration perceived as threatening.