Why did UAE foreign minister go to Russia following his meeting with Pompeo?

Russia appreciated that the United Arab Emirates took part in discussions about exercising restraint when it comes to US-Iran tensions. 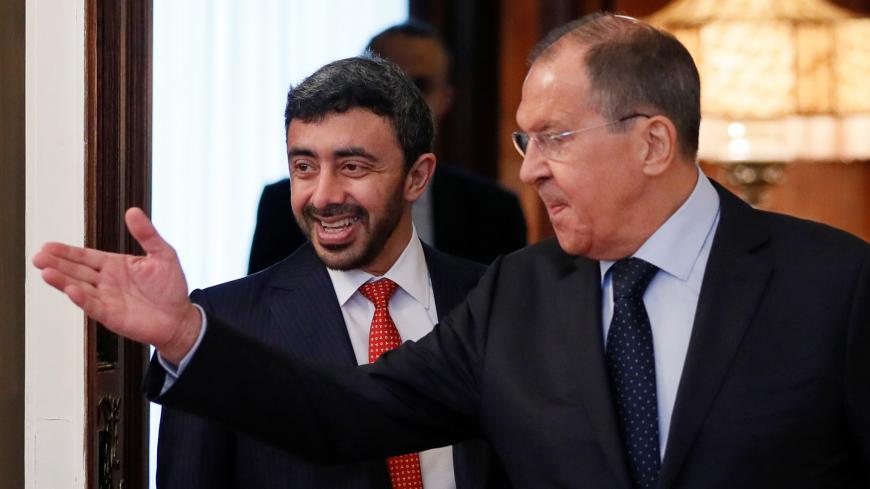 Abdullah and Lavrov had met relatively recently, in early March in Abu Dhabi during Lavrov's Gulf tour. At the beginning of his meeting with his Emirati counterpart in Moscow, Lavrov said, “The situation is unfolding so rapidly that it is necessary to meet more often.” This had to do with the situation involving Iran and recent events in the Gulf region, namely attacks on oil tankers, the downed American drone, new US sanctions and Tehran’s threats to accelerate uranium enrichment.

Earlier in the week, Pompeo had embarked on a trip to Saudi Arabia and the United Arab Emirates. In both countries he spoke about plans to discuss a possible “global coalition” against Tehran that would, among other things, ensure freedom of navigation in the Persian Gulf.

At the press conference in Moscow, the UAE foreign minister told journalists that his talks with the US secretary of state revolved around the situation in Iran, among other issues.

“As far as the coalition is concerned, he [Pompeo] said how important it was to seek increased international involvement in ensuring security of oil tankers,” the UAE said in reply to an RT correspondent. Abdullah added that any steps that are being taken are aimed at protecting vessels as opposed to targeting Iran.

It was most beneficial for Moscow to receive firsthand accounts of the issues considered during Pompeo’s visit to the region, and most importantly, the replies of Arab interlocutors. However, both ministers’ public statements at the press conference following the talks tried to neglect the issue altogether and touched on it only when journalists asked about it. Lavrov first spoke about the excellent bilateral relations, stressing Moscow’s “high expectations” from the next meeting of the Intergovernmental Russian-UAE Commission on Trade, Economic and Technical Cooperation due this year, and then focused on international issues. Even this part did not mention Iran straight away.

Lavrov first touched on the developments in Libya, Yemen and Syria, “paid particular attention” to the Palestinian-Israeli settlement, and only at the end mentioned the situation in the Persian Gulf.

“We are interested in settling the situation. De-escalation should take place in this strategically important region and a positive and uniting agenda should be promoted to facilitate the elimination of any discord or conflict on the basis of dialogue,” Lavrov said.

Once again, Russia’s foreign minister drew his guest’s attention to “Russia's concept for collective security for the Arab states in the Persian Gulf and the Islamic Republic of Iran with assistance from the international community, including the League of Arab States, the Organization of Islamic Cooperation and the UN Security Council permanent members.”

As Lavrov put it, “We are interested in discussing this issue and expect that together we will be able to reduce tensions and achieve a detente.”

While Moscow has been dwelling on the concept for years, its proposals have been just collecting dust. However, Lavrov said this time he “felt interest” from his UAE counterpart.

“Our idea to create a dialogue between the Arab states of the Persian Gulf and Iran could serve as an alternative to the disastrous path the warmongers are trying to push the region down. Dialogue always helps to resolve differences in a peaceful way,” Lavrov said. The Russian foreign minister appeared to have been comforted by the fact that Abdullah had arrived in Moscow shortly after his talks with Pompeo.

Lavrov expressed confidence that Washington and Tehran had yet to reach the point of no return. When asked whether there still was a chance to resolve the crisis through negotiations, he said, “Negotiations are always an option if both sides are willing to conduct them with mutual respect, based on the principles of international law, diplomatic practice and decency.”

At the same time, he said it was not positive to see “statements promising the onset of an age of prosperity in Iran from the very start of the negotiating process, followed by direct insults and humiliating sanctions, which have been escalating … the past two days.” In the end, Lavrov vowed to try to “persuade both Iranian and American colleagues to step away from this danger line.”

UAE-Russian trade and cooperation in outer space also were discussed. Abdullah mentioned a rise in the bilateral trade turnover; according to Russian statistics, bilateral trade increased by 3.6% to $1.6 billion in 2018. Also, it is just three months until the first Emirati astronaut is to join the International Space Station.

Having touched upon the issue of Syria — a point crucial for Russia — Abdullah immediately said that he had discussed the tanker attacks in the Gulf of Oman with his Russian counterpart. Then the Emirati foreign minister dwelled on the situation in Yemen and Libya, making reassurances that Abu Dhabi supports all the initiatives of UN special envoys and special representatives of the secretary-general heading political missions in these countries.

Asked whether the UAE’s views echoed the US position that Iran was responsible for the tanker attacks, Abdullah exercised highly cautious restraint. Rather than support or rebut the US claims, he confirmed the findings of the joint report submitted by the UAE along with Saudi Arabia and Norway to the UN Security Council following the first attack on May 12. “The UAE is not pointing fingers of accusation at any state for the recent attacks on four oil tankers in the country's territorial waters since clear, scientific and convincing evidence is required to do that. Should any other country have clearer evidence, the international community would certainly take it into consideration,” he said.

The UAE delegation was the second Arab one to arrive in Moscow during the week. On June 25, the Russian capital hosted talks involving the heads of Russia’s and Egypt’s foreign and defense ministries: Lavrov and Russian Defense Minister Sergei Shoigu sat down with their Egyptian counterparts Sameh Shoukry and Mohamed Zaki, respectively. This was the fifth "2+2" meeting the two countries have held since 2013; the previous round took place in May 2018, also in Moscow.

Shoigu pledged Russia’s readiness to continue to assist Egypt in enhancing its defense, while Zaki placed emphasis on Russia as an “active supporter of Egypt’s counterterrorist efforts.”

It is worth noting that these talks took place not just during ongoing tensions over Iran, but also amid the unveiling by the United States of the economic component of its “deal of the century,” the peace plan for the Israelis and the Palestinians, at a conference in Bahrain. Moscow has been highly skeptical about the Trump peace initiative and has been airing its position across the region in numerous ways.