Among its many other problems, Iran's economy is suffering because of poor and brash decisions of the past and needs to get back to the basics. 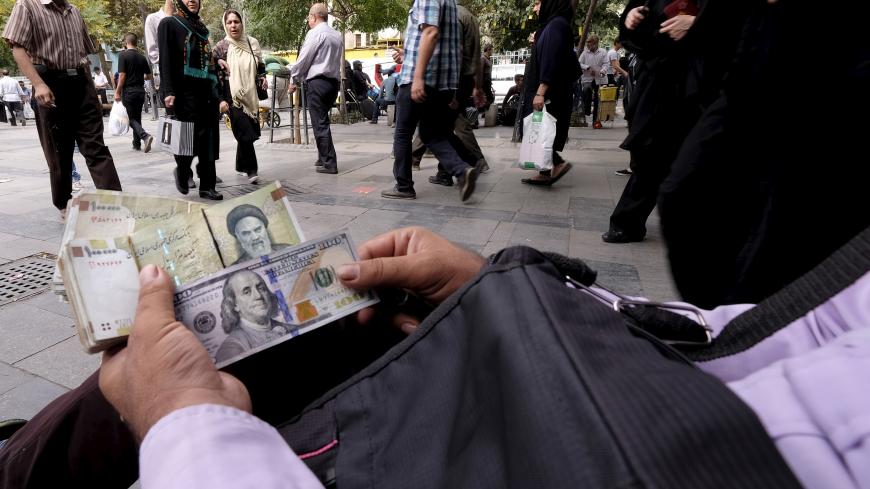 A money-changer displays US and Iranian banknotes at the Grand Bazaar, Tehran, Iran, Oct. 7, 2015. - REUTERS/Raheb Homavandi/TIMA

Having access to working capital is considered the most basic requirement of manufacturers in Iran. Under normal circumstances, industry generally obtains liquidity from four main sources: financial institutions, the National Development Fund, the capital market and, ultimately, credit lines and foreign investment.

Accessing capital is becoming more vital, but also more difficult in the presence of barriers imposed by Washington's "maximum pressure" sanctions campaign on Iranian banks and companies. The Iranian government seems to be left with perhaps two options to sponsor domestic industries: the stock market and the banking system. But the Iranian equities market is not deeply developed or investor-friendly. As such, Iranian firms currently are largely reliant on domestic lenders to meet their day-to-day cash requirements. However, the failure of the Central Bank of Iran (CBI) to implement modern monetary policies in past years complicates the situation.

Economic logic says banks' scarce resources ought to be allotted to profitable businesses to reinvigorate them, rather than to those already on the verge of bankruptcy. Although the liquidity shortage has been a core problem for manufacturing plants, Iran's business climate will not be improved by recklessly pumping cash into them.

In the National Business Climate Survey, released in April and conducted by the Iran Chamber of Commerce, Industries, Mines and Agriculture over the first quarter of fiscal 2019-20, respondents said three factors are mainly responsible for the unfavorable business environment: unpredictability and changes in the price of raw materials and products; the instability of economic policies, regulations and procedures for businesses; and the difficulty of getting bank financing. As the report confirms, the helicopter money policy that CBI firmly follows to try to improve Iran's business climate didn't count as a major hurdle for production.

It is evident in this survey and similar academic studies from previous years that the government’s unwise price intervention has led to the failure of well-performing Iranian enterprises. This potentially could speed up shut-downs and slow any job creation there might be, plunging the economy deeper into recession.

Also, repeated experiences have shown that pumping money earned during the oil-boom years into manufacturing businesses without well-devised strategies is not only futile, but leads to a growing deficit and inflation as well.

In 2015, Iran's Ministry of Industry, Mine and Trade issued a report on the status of firms operating in industrial areas of the country. The report indicates that from 1992 to 2012, nearly 70% of active companies in these areas shut down. Strikingly, about 55% of such units closed in just six years, from 2006 to 2012. In other words, production units closed even during the years of abundant oil revenues. Furthermore, all this occurred while a series of laws favoring business were passed, eliminating many barriers to production across the country. Those measures included rolling over enterprises’ deferred obligations, forgiving their outstanding debts and financing them.

There's no doubt that the country's economy needs to be able to sponsor its development projects, and state banks play a central role in achieving this. But the banks' Capital Adequacy Ratio (CAR) shows they aren't in a good position to lend. CAR measures a bank's capital in relation to its risk-weighted assets. Iranian banks’ average CAR is currently close to 4.8%, while it must be at least 8% under Basel III international banking regulations. Thanks to their non-optimal business models, state banks have turned into loss-making engines that are draining their scarce capital.

If the engines continue generating losses, raising banks’ capital could improve their lending power, but how will that benefit the Iranian economy as it grapples with slow activity?

Lenders should duly evaluate the economic feasibility of plans offered by enterprises seeking loans. If this isn't done, increasing the banks' capital will not strengthen their lending power to well-performing, competitive businesses and could adversely affect manufacturing and the employment rate.

Over the past 40 years, the Iranian economy has occasionally experienced high inflation. But even when real interest rates were negative, the country's industrial sectors never performed positively. Some politicians argue that cheaper facilities might be the solution to the current recession. On the contrary, statistics show that the rate of capital formation, necessary to increase production, has been on a downward trajectory in Iran.

In short, this indicates that the country's financial resources in previous years were channeled toward speculative rather than productive activities, on the back of erroneous economic decisions made by both politicians and monetary officials.

In sum, to bring about genuine change in the economy, government officials need to value and respect the principles of basic economics and abandon populist policies once and for all.