Even as Sisi frees prisoners, opponents unite against him

Egyptian President Abdel Fattah al-Sisi is releasing more opposition prisoners, bringing the number to 8,000 since he became president in 2014, but he hasn't appeased his rivals. 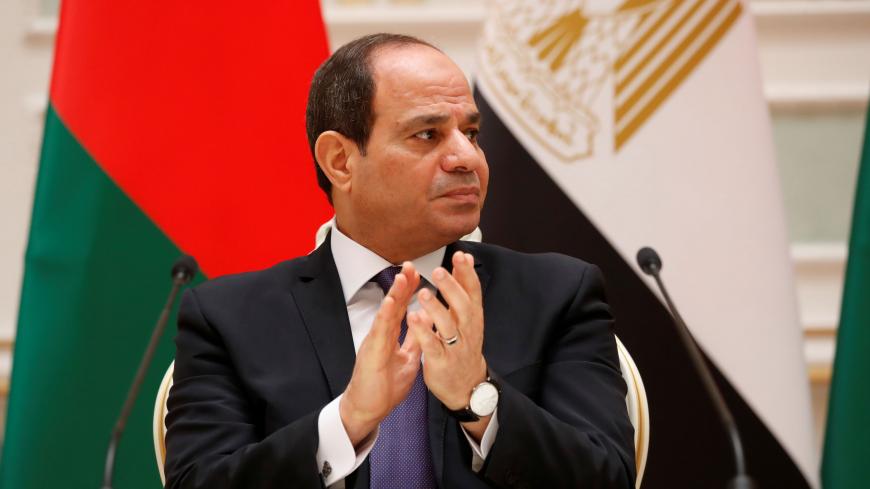 CAIRO — The Egyptian opposition at home and abroad is amplifying its call to unify their ranks against the government.

Ayman Nour, a former Egyptian presidential candidate and head of Ghad El-Thawra Party, said in a June 9 Facebook post that representatives of the Egyptian opposition far and wide have met numerous times to discuss his plan to build a national dialogue.

Nour, who launched the initiative in April, calls for “saving Egypt from the regime of [President] Abdel Fattah al-Sisi.”

The head of the pro-opposition Constitution Party, Alaa al-Khayyam, said in a May 26 interview with the Muslim Brotherhood-affiliated Arabi 21 news website that he and parliament member Ahmad Tantawi are leading several moves to unify the ranks of civil opposition movements against Sisi.

Meanwhile, the government continues to release opposition figures from prisons. On May 23, Egypt's public prosecutor decided to release prominent opposition activist Masoum Marzouk and four others who were jailed in 2018 on charges of helping a terrorist group, in reference to the Muslim Brotherhood. They had been in custody for nine months.

Sisi decided to pardon and release prisoners in cases involving demonstrations against the Egyptian government that were believed to have been instigated by some civil forces or the Muslim Brotherhood.

An informed source in the Egyptian National Council for Human Rights told Al-Monitor on condition of anonymity that the released prisoners did include many who participated in Muslim Brotherhood demonstrations in 2013 after the military ousted the previous president, people protesting against demonstration restrictions that year, and also against the 2016 maritime demarcation agreement between Egypt and Saudi Arabia regarding Tiran and Sanafir islands.

Taysir Mohammed, who leads the Building and Development Party, the Muslim Brotherhood's political arm, told Al-Monitor he hopes the pardons signal a prelude to a national reconciliation strategy and a new phase in which prisons will be empty.

But a source in the pro-opposition April 6 Youth Movement, who preferred not to be named, told Al-Monitor the pressure from several national and international human rights organizations, including Human Rights Watch, is the reason behind the regime’s decision to release more opposition prisoners. The source said the pressure embarrasses the government in international forums such as the UN and before countries interested in freedom issues.

Along the same lines, Mamdouh Munir, director of the International Institute of Political Science and Strategy, said in a May 22 press statement to Al Jazeera that the pardons are “an attempt to ease political tension, as Sisi is trying to convey a message to the opposition to remain silent and idle if they want more prisoners to be released.”

He added, "Another scenario could play out that would be the start of a revolution against the regime, especially with the ongoing trials of opposition figures at home and abroad."

Mokhtar Ghobashi, deputy head of the Arab Center for Political and Strategic Studies, told Al-Monitor that a government reconciliation with any opposition faction whatsoever is unlikely, since all disputes with these factions are judicial and criminal disputes. “There is no reconciliation with those who committed or planned any crime. These will only be dealt with by law," he said.

The presidential amnesty, he said, is part of the political leadership's belief in transitional justice.

“Many of those involved in political crimes such as unauthorized demonstrations — that are not criminal acts such as murder or terrorism — deserve another chance because they were confused by the lies of the Muslim Brotherhood against the Egyptian regime or were involved in crimes of a political nature motivated by patriotism without an objective assessment of the situation," Ghobashi said.

The need for security and political stability is a likely motivator for Sisi, said Amr Farouk, a researcher specializing in political Islam movements. Farouk wrote in a Facebook post May 21, “In terms of security, the Egyptian police have recently dismantled several terrorist groups." He noted that these groups and the people who have been released won't be able to reconnect with each other.

“At the political level, [Sisi has] noted that the popularity of the Muslim Brotherhood has declined in a way that allows many of its members in prisons to reconsider their ideas away from the group’s collective influence,” the post read.