Is Russia replacing the US in the peace process? 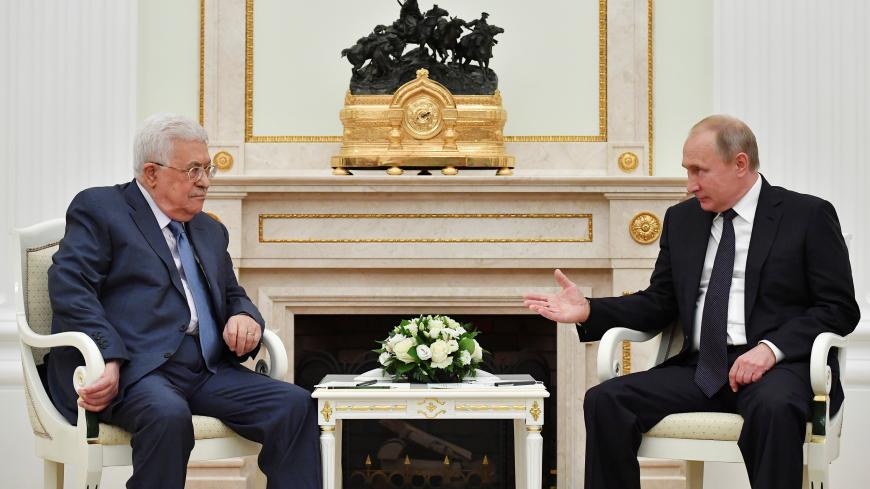 GAZA CITY, Gaza Strip — Russian efforts to promote ties with the Palestinian Authority (PA) continue as it seeks to fill the void caused by the rupture of PA-US ties, following Donald Trump’s Jerusalem decision, the cessation of all financial aid to Palestinians and the closing of the PLO office in Washington.

Most recently, the Russian ambassador to the PA, Haidar Aghanin, said on May 29 that his country is examining a draft convention that would exempt holders of Palestinian diplomatic passports from having to obtain a visa to enter Russia.

During a farewell visit to the Palestinian Ministry of Foreign Affairs on May 29, Aghanin expressed joy that his last task as ambassador was to hand to his country a draft convention designed to ease communication between Palestinian and Russian officials. Mid-May marked the end of his term as ambassador to the PA.

During his farewell meeting with Aghanin on May 23, Palestinian Foreign Minister Riyad al-Maliki praised Russia’s political and financial support to Palestinians, as well as its stances, which serve the Palestinian cause in international forums.

Russia stepped up the race against the United States in the Palestinian dossier in the past few years. Most notably, Russian Foreign Minister Sergey Lavrov communicated in November 2018 his country’s willingness to host an Israeli-Palestinian meeting, in an attempt to have the two sides resume peace talks, stalled since 2014.

Moreover, Russia sought to end the inter-Palestinian split, as it hosted Palestinian official and factional delegations in July and August 2018. The efforts culminated with a meeting bringing together the factions in Moscow in February 2019. Yet the attendees failed to reach an agreement in light of heightened differences between the PLO factions, Hamas and the Islamic Jihad over a unified Palestinian political program.

Speaking to Al-Monitor, Amal Jadou, the assistant minister on European affairs at the Palestinian Ministry of Foreign Affairs, applauded the step to submit the draft convention to Russia, and noted that her ministry seeks to have all countries make Palestinian passport holders exempt from having to obtain entry visas.

She said her ministry is taking steps to make things easier for those who travel with a Palestinian passport, particularly the diplomats, to countries that have strong ties with Palestine.

She explained that such steps highlight the depth of Russian-Palestinian ties and affirm that they are evolving with time.

Countries such as Chile, Yemen, Serbia and Azerbaijan already allow those who hold Palestinian diplomatic passports to enter their territories visa-free. India followed suit in May 2018.

Speaking to Al-Monitor on condition of anonymity, an official at the Russian Embassy in Ramallah, said that Aghanin submitted to the Russian Ministry of Foreign Affairs in late May the draft convention for examination and approval.

The source anticipated that the ministry would consent to the draft and that the measure would come into effect with the arrival of the new Russian ambassador to the PA. The source hoped that the Russian and Palestinian sides continue to make efforts so that all Palestinian passport holders — not just holders of the diplomatic passport — do not have to obtain entry visas.

Palestinian-Russian ties date back to 1970, when an official PLO delegation visited the former Soviet Union. The latter agreed to the PLO opening a representative office in 1974. In 1990, the office turned into an embassy, and the PLO representative became the Palestinian ambassador.

As part of efforts to boost bilateral ties, the two sides signed 19 joint cooperation agreements in 2016, 2017 and 2018 at all levels of investments, infrastructure, media, education, trade and water. The Russian-Palestinian Joint Higher Political Committee, which was set up in 1980, met in late November 2018 to discuss joint political action for the upcoming period.

In April 2015, the two sides established the Russian-Palestinian Intergovernmental Commission on Trade and Economic Cooperation. Since then, the commission has held three meetings in 2016, 2017 and 2018.

Speaking to Al-Monitor, Jamal Barghouth, a board member of the Association of Russian-Speaking University Graduates in Bethlehem, said that such an exemption would encourage the promotion of bilateral ties. He hopes that the convention will include all Palestinian citizens who travel to Russia in the future.

He further said that Russian-Palestinian relations — political, economic, commercial and educational — have remarkably improved in the past few years. “Russia made available 160 scholarships for Palestinian students in all fields of study in Russian universities and educational [degree] levels," he said.

Russian-Palestinian relations will continue to evolve in light of the PA's rejection of the US role as the sole mediator of peace talks with Israel. President Mahmoud Abbas is expected to visit Moscow following the Eid al-Fitr holiday. He will discuss with Russian President Vladimir Putin and other Russian officials the political developments relating to the Palestinian cause as well as joint political moves to follow the US presentation of its peace plan.