An Egyptian travel agency has launched a new paid VIP travel service for Gazans who wish to use the Rafah border crossing hassle-free. 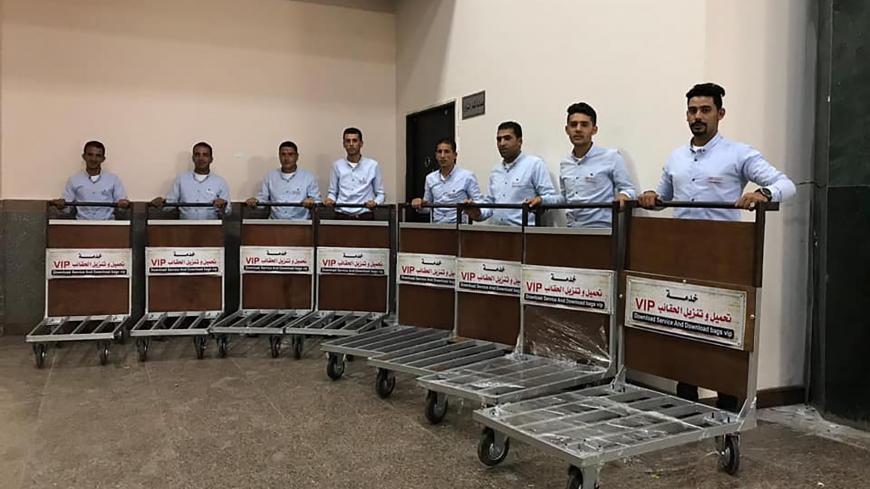 An official Palestinian source speaking to Al-Monitor on condition of anonymity said the VIP service is offered through a newly established VIP lounge on the Egyptian side of the crossing. The Hala Consulting and Tourism Services agency has two branches, one in Rafah, in the southern Gaza Strip, and the other one in Cairo. According to the source, both branches opened a month ago.

The source said that on June 12 the agency started accepting applications from Palestinians wishing to travel through the Rafah crossing. The agency’s new service offers Palestinians full travel assistance and transfer from the Gaza Strip to Cairo and vice versa, without any wait times at the border or any other obstacles.

The source did not specify the fee the agency charges for this service, but estimated that it would be roughly $1,200 per person for the VIP service, which includes the cost of the transit visa and the transport fare. Travelers normally pay about $50-$70 per person to travel to Cairo.

Al-Monitor tried to get in touch with the agency's branch officer in Gaza, but to no avail.

The Rafah crossing is currently open in both directions for Palestinians. However, travelers have to wait many hours on the Egyptian side of the crossing while their travel documents are processed before being granted access.

The Egyptian authorities and the Hamas-run Ministry of Interior in the Gaza Strip have yet to comment on the new service.

The Ministry of Interior did not issue any decision on the agency in Rafah, which is still receiving travel applications from Gazans. The security source also did not mention any actions to be taken in this regard.

Hala Consulting and Tourism Services runs a WhatsApp service for those who want to benefit from its services.

Shaima Awad, from Gaza city, told Al-Monitor she contacted the agency to register for travel because she needs to complete her university studies abroad. She said she was asked to pay $1,200 for the transfer from the Rafah border crossing to Cairo. “I arrived in Cairo on June 16 without any complications. I had to use the VIP service because I needed to travel quickly and couldn’t afford waiting for my name to show up on the travelers list,” she added.

Palestinians resort to travel agencies in light of the large number of travelers at the crossing and the long wait times. These agencies in the Gaza Strip are connected with Egyptian officers working on the Egyptian side of the Rafah border crossing, who get paid by the travelers to facilitate their travel. This system is known as “travel coordination.”

In November 2018, PalToday news agency had quoted Palestinian security sources as saying that the General Intelligence Service of the Ministry of Interior in the Gaza Strip notified all travel agencies in Gaza that the coordination system would be suspended through the Rafah crossing.

Writer and legal researcher Ahmed Abu Zuhri, who is also a member of the Palestinian International Center for Law Studies in Gaza, believes freedom of movement and travel is one of the fundamental rights guaranteed by international law and may not be violated or denied to anyone.

He told Al-Monitor, “Citizens at the Rafah crossing are forced to enter into financial bargaining in order to travel to Egypt under the so-called coordination system. This is extortion and an illegitimate act that harms the citizens’ financial rights and other rights guaranteed by law.”

Commenting on the new VIP service offered by Hala Consulting and Tourism Services, Abu Zuhri described it as an illegal activity and escalation of illegal and immoral activities. “This service is unfair since it guarantees freedom of movement to some travelers and not to others. It gives priority to those who have money.”

The Rafah crossing on the Egyptian border is the only way out for Gazans. The crossing registered the departure of 36,350 travelers from the Gaza Strip and return of 19,793 others in 2018, according to Rafah crossing administration sources.

At the political level, Ibrahim Madhoun, a political analyst writing for local Gaza newspaper Al-Resalah lashed out at the Egyptian agency for seeking to make a profit from Palestians who can afford to pay for the VIP service. “Hamas would not allow this in the Gaza Strip,” he told Al-Monitor. “This agency is exploiting the suffering of the citizens of Gaza who live in poverty. The VIP service will not be popular and will be shunned, especially by Hamas.”

He added, “Egyptian sovereign bodies do not accept the exploitation of the needs of Palestinian citizens, and will therefore understand Hamas' rejection of this agency. This will not affect the relationship between Cairo and Hamas.”

Tayseer Mehasen, diplomatic adviser to the Ministry of Foreign Affairs in Gaza, told Al-Monitor, “Hamas should not accept this agency to keep running. This would cause it to appear as an accomplice in the blackmailing of Palestinian citizens in Gaza.”

He noted, “Hamas must put an end to the travel coordination system and guarantee freedom of movement for the citizens of Gaza, in accordance with the laws in force at the international ports.”

Mehasen added, “Hamas must discuss the issue of travel coordination when meeting the Egyptian security service leaders. It must focus on the Gaza Strip being dealt with from a political standpoint rather than a source of security concern.”

Meanwhile, Palestinians keep hoping the Ministry of Interior in the Gaza Strip takes action to end the Egyptian coordination system.